As autocrats ascend, gloomy data on democracies′ decline | World | Breaking news and perspectives from around the globe | DW | 15.09.2022 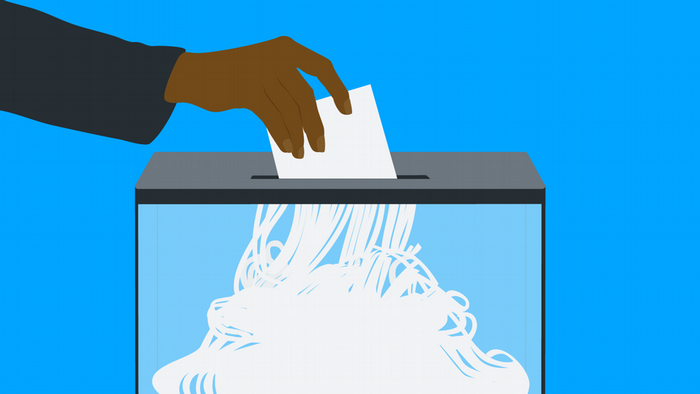 On International Day of Democracy, DW takes stock: Which democracies are decaying? And which ones are growing stronger?

Before being elected president of Brazil in 2018, Jair Bolsonaro was granted seven terms in Congress by voters. Up for reelection in October and facing the first possible ballot box defeat of his career, Bolsonaro has suggested several times over the past year that he would not concede defeat if voters choose his opponent.

"Only God can remove me from the presidential chair," Bolsonaro said in more than one political rally over the last two years, apparently threatening to defy the very democratic system that put him in power in the first place.

Around the world, countries are facing threats posed by would-be autocrats. And the road to restoring democracy is long and hard, as a DW analysis of century-spanning data shows.

Brazil is one of 12 countries where domestic democratic systems are tilting toward autocracy, according to data published by Varieties of Democracy (V-Dem), an independent research institute based at the University of Gothenburg. The other 11 countries span the globe: Poland, Niger, Indonesia, Botswana, Guatemala, Tunisia, Croatia, the Czech Republic, Guyana, Mauritius and Slovenia.

In addition to these 12 countries where crises of democracy are still unfolding, another 17 have lost the fight in the past decade alone — including Turkey, the Philippines and Hungary.

Not only are long-established democracies turning toward authoritarianism, but autocratic regimes are tightening their grips on power. In countries such as Russia and Venezuela, authoritarian rule has been entrenched and civil liberties further curtailed.

Democracy is usually thought of as a binary. Either a country is democratic or it isn't.

The 179 countries classified by V-Dem are almost evenly split between electoral or closed autocracies and liberal or electoral democracies. Some countries recognized by the United Nations, such as the Vatican or San Marino, have no data available.

This division can hide some important subtleties, said Bastian Herre, a researcher at the nonprofit organization Our World in Data, who researched the relationship between governmental ideologies and democracy while working toward his PhD in political science at the University of Chicago.

"With that, we can know that North Korea and Iran are not democracies while Chile and Norway are," he said. But, he added, we can't know how much more democratic Iran is than North Korea, nor how less democratic Chile is than Norway.

Herre said such categories weren't necessarily useful for detecting decays in democracy as they happen. "If we want to have an early-alert system, these are not the right measures," Herre said. "They would only kick in when democratic breakdown already happened."

That's where the Liberal Democracy Index comes in. The LDI ranges from 0 to 1. The higher the value, the closer to the ideals of liberal democracy a country is.

Important differences between countries within the same category become apparent. The LDI also allows researchers to see how the state of democracy in a country changes every year. This is especially significant because, nowadays, democracies don't usually die overnight.

Tanks rolling, troops mobilized and democracy going out with a bang (or series of bangs) — coups often come to mind when we think of countries that have turned to authoritarianism.

Though these kinds of takeovers still happen, the current shifts to autocracy are often more gradual, incrementally building to the point where little of the old system remains.

This is what has occurred in the most recent examples of established democracies that have become autocracies. It is also playing out in countries that are still democratic but on a slippery slope.


The sharpest turns toward autocracy have frequently coincided with the election of illiberal leaders such as Bolsonaro in Brazil, Andrzej Duda in Poland, Viktor Orban in Hungary, Recep Tayyip Erdogan in Turkey and Narendra Modi in India.

The aggravation of existing problems is often a factor in the rise of such anti-democratic politicians, said Fernando Bizzarro, a Brazilian researcher of government institutions at Harvard University.

"For these leaders to come to power, you need other elements, such as a crisis of traditional parties," Bizzarro said, adding that increased political hostility can also play a role. "Polarization creates the feeling that, as you detest your opponent so much, anything goes to get rid of them — including destroying democracy."

V-Dem has chronicled 81 periods of democratic decay in countries since 1900 — 50 of which have occurred since 2000. In roughly 75% of cases, the crisis resulted in a complete transition to autocracy.

"The actors that promote autocratization are usually the chief executives, and they can have large parliamentary majorities," said Sebastian Hellmeier, one of the researchers who examined episodes of backsliding. "In the end, it is a kind of death by a million cuts, with a lot of smaller changes that are difficult to stop until it's too late," he said.

What about the democracies that survive?

Apart from simply detecting when a crisis in democracy happened, the research by Hellmeier and his colleagues aims to understand why some democracies fall apart and others remain intact.

As the researchers were mostly concerned with the competitiveness and fairness of elections, they used a slightly different measurement: the Electoral Democracy Index. The EDI works much like the LDI, but without considering elements such as civil liberties or checks and balances between powers.

"Breakdown resilience" occurs in nations where democratic crises take hold but are stopped before the political system breaks down. Rarer than onset resilience, breakdown resilience was recently observable in countries such as Ecuador and South Korea.

A high level of economic development correlates with onset resilience — but it doesn't seem to affect the outcome of a crisis of democracy should one begin. Having neighboring democracies seems to be an important factor in a country's ability to survive backsliding.

A longer tradition of democracy and an influential independent judiciary are associated with both kinds of democratic resilience. The presence of long-standing democratic institutions can help citizens think of democracy as the "only game in town," Hellmeier said, forcing political actors to restrict their actions to within the established rules.

A strong judiciary might act as the last bulwark should a self-aggrandized leader overreach, Hellmeier said. In some cases, especially in countries with relatively weaker institutions, external factors might play an important role.

In 2013, Ecuadoran President Rafael Correa won his third consecutive election. He was a popular politician, bolstered by economic growth and the expanding of welfare protections. His tenure, however, was also marked by diminishing liberties for media, the opposition and civil society.

Correa was the kind of leader democracies have trouble pushing back against. This changed when economic growth stalled, and Correa saw his government engulfed in a corruption scandal involving the Brazilian engineering conglomerate Odebrecht.

Correa decided to not run again in 2017, instead supporting his vice president, Lenin Moreno. Moreno did win, but broke ties with his former mentor and went on to undo some constitutional changes and restrictive regulations.

Melis Laebens, a postdoctoral researcher at Oxford University, said this was an example of a recovery path for democracies under threat. Even when would-be autocrats have a strong grip on domestic politics, unexpected events such as economic crises and corruption investigations can leave them vulnerable. 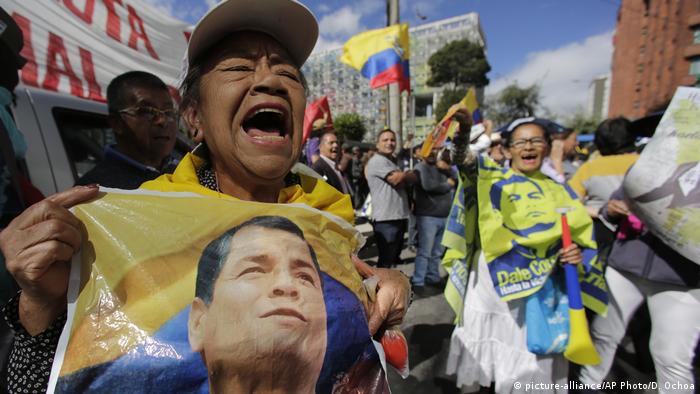 In June 2018, supporters of former President Rafael Correa protested outside the Supreme Court, in Quito

"In the case of Odebrecht, the fact that the investigation was international made a lot of difference in terms of pressuring Correa's allies into changing their positions," she said. "What matters is that the opposition, when it gets an opportunity, even if it's not able to unseat the incumbent, can at least maintain some legitimate sources of power. "Ecuador also serves as a cautionary tale about what happens after democratic backslide is apparently reversed. Since then, the country has seen seemingly non-stop protests. The current president, Guillermo Lasso, just survived an impeachment vote. Correa was found guilty of corruption and left the country. However, he still maintains political influence and heavy, if diminished, support.

"Sometimes an excessive executive power can just be alternating with an excessive weakness of government," Laebens said. "These events can transform politics in the long run. It's rare that they just disappear."

In the case of Brazil, Bolsonaro will face the electorate in a first-round presidential vote on October 2. Cleared by a judge of the charges that prevented him from running in 2018, Bolsonaro's main opponent, Luis Inacio Lula da Silva, is currently the favorite in the polls. Whether "only God can remove" Bolsonaro from power remains to be seen, but millions are casting their ballots with that goal in mind.

Democracies on the edge: What's behind the shift towards autocracy? 24.08.2022

After decades of advances, the number of democratic countries seems to have ground to a standstill. Several countries are making to slow but steady turn towards autocracy.