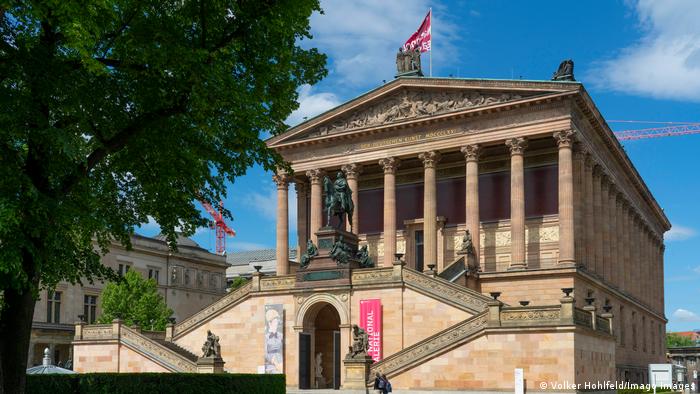 The discovery of extensive damage to artworks and artifacts on Berlin's Museum Island — the city's cultural center —  is yet to be explained as a senseless act of vandalism, or a crime meant to send a message.

On Wednesday morning, police confirmed reports by German media, including newspaper Der Tagesspiegel and broadcaster Deutschlandfunk, that unknown perpetrators sprayed oily liquid on at least 70 objects in the Pergamon Museum, the Neues Museum, the Alte Nationalgalerie and other locations.

Media reports indicated that the crime had occurred nearly three weeks ago, on October 3, which was German Unity Day and the 30th anniversary of reunification between East and West Germany. Whether the day was deliberately chosen remains a mystery.

The act of vandalism was "one of the most extensive attacks on works of art and antiquities in the history of post-war Germany," wrote German daily Die Zeit. Among the damaged pieces are Egyptian sarcophagi and stone sculptures. The liquid has left visible stains on the artworks and artifacts.

Germany's minister of state for culture Monika Grütters has strongly condemned the intentional damage to dozens of works of art on Berlin's Museum Island. The act is "directed against artistic forms of expression, against the cultural heritage of all of us, against civil forms of debate and thus against the principles of our democratic self-image," she said in a statement released Wednesday.

The question remains as to why authorities remained silent about the crime for nearly three weeks. According to Tagesspiegel, the State Criminal Police Office (LKA) wrote to people who had visited the museums on October 3 and asked if they had seen anything suspicious. A preliminary investigation into the property damage has since been opened.

October 3 was the first day the museum had been open since March 2020 when the coronavirus pandemic forced it to shut its doors.

Carsten Fröhlich, Senate head for property offences at the LKA, said on Wednesday that his office was informed on October 5 about the vandalism by the Prussian Cultural Foundation, the parent organization of Berlin State Museums that manages Museum Island.

After taking over the investigation, the LKA "initially refrained from informing the public," said Fröhlich, so it could privately inform the lenders of the artifacts and artworks before the press reported the case, and "to determine the extent of the damage to property." The initial investigation into the damage was complicated by the fact that several museums were involved, and the fact that over 3,000 visitors had visited Museum Island on October 3.

"To date, we are still unable to determine when the damage to property actually occurred," he added.  Moreover, available surveillance camera footage does not observe the crime being committed. Fröhlich added that the perpetrator who sprayed the colorless liquid on the objects likely acted alone.

The five museums that make up Museum Island in the heart of Berlin are among the most important museums in the country, with the cultural complex becoming a UNESCO World Heritage Site in 1999.

The Pergamon Museum celebrated its 90th birthday at the beginning of October, and is one of the most popular museums in Germany, attracting roughly 1 million visitors per year —  thanks largely to the Pergamon Altar which dates back to the 2nd century B.C.

Security at Museum Island has been the subject of ongoing criticism. In 2017, a gang succeeded in stealing a 100-kilogram (200 pound) gold coin called "Big Maple Leaf" valued at 3.75 million euros ($4.38 million) from the Bode Museum. The elaborate heist involved a ladder, wheelbarrow and getaway car.

Culture minister Monika Grütters said that the Berlin State Museums must once again be questioned about their security precautions, and requested a comprehensive report into the issue. "It must be clarified how this much damage could have gone unnoticed, and how such attacks are to be prevented in the future," she said.

Cultural diplomacy is the softer power game between nations. Few people from the cultural sector have seen as much of it as Klaus-Dieter Lehmann. 2020 is his final year as President of the Goethe-Institut.