Artists After the Escape: Judith Kerr, children's book author at 95 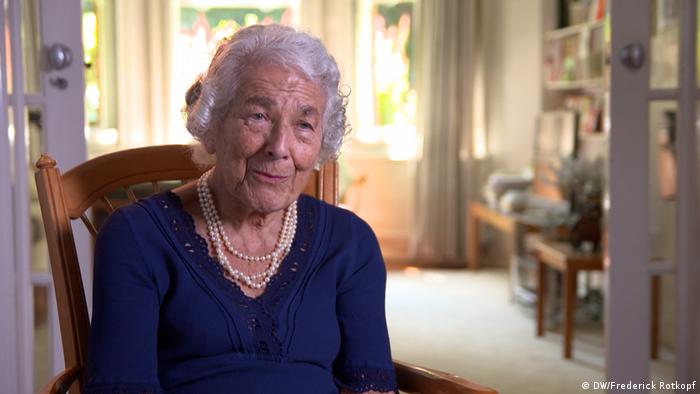 Judith Kerr, who turned 95 in June 2018, is a very English lady. The first thing she does is offer my colleague, Laura, and myself tea, which we enjoy while sitting in armchairs in the author's London living room.

She is a petite old lady dressed in an elegant blue dress and adorned with a chain of pearls around her neck. The white curls on her head are carefully coiffed. Outside, a plane passes by overhead every five minutes as it makes its way towards Heathrow airport.

The writer Judith Kerr has spent over half a century in south London, much of it with the love of her life and husband, the BBC author Nigel Kneale, until his death in 2006.

The couple's son and daughter, now adults, grew up here in a typical English brick house with its well-tended front garden full of rhododendron bushes and flower beds — all just as cozy and unremarkable as the neighboring houses. You can't tell from the outside that a best-selling author lives here, one whose books have been translated into 20 different languages and sold over 10 million copies. 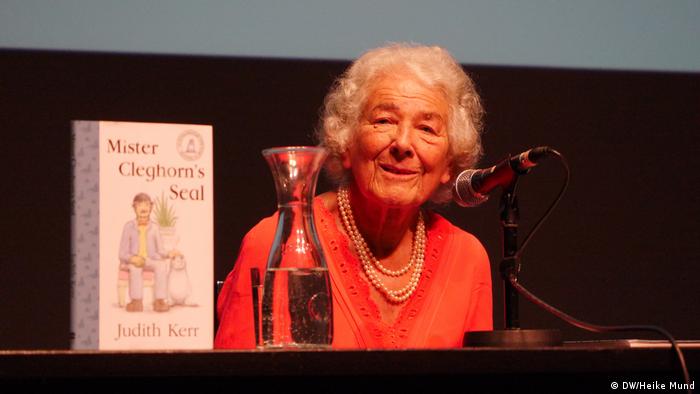 A passion for writing and illustrating children's books

We spent over half a year trying to schedule an interview with Judith Kerr for our multimedia feature  "After the Escape." It isn't so easy to meet up with her since she continues to actively pursue her passion for writing and illustrating children's books.

Despite being over 90 years old, Judith Kerr publishes one book after another. Around one year after the publication of "Mister Cleghorn's Seal," "Katinka's Tail" has just hit bookstores. Once again, one of her own cats is at the center of the book, just as in her successful series about Mog. Hardly surprising that during our visit a cat curled its way around our legs. 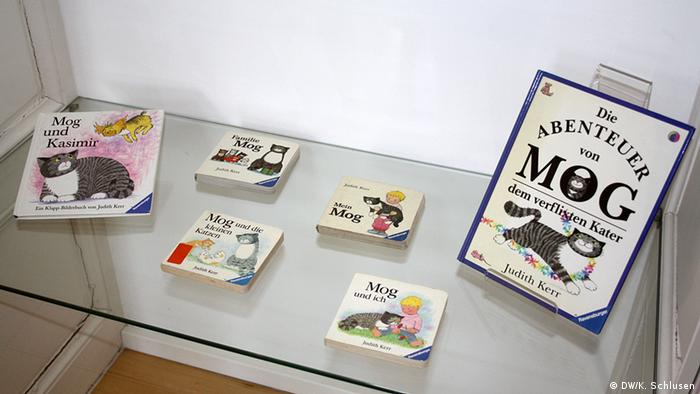 Many of Kerr's books feature cats. The feline character 'Mog' appears in numerous stories that have been translated into many languages, included German

However, the book that brought Judith Kerr worldwide fame, "When Hitler Stole Pink Rabbit," does not feature a cat. It tells the story of a young girl who flees Nazi Germany with her family in 1933 — the author's own story.

I asked her how much truth is contained in the novel. "Everything important was exactly as such; I wrote it as honestly as I could," Judith Kerr answered. "When you write in the first person, everything has to be exactly as it was — otherwise, you're cheating." 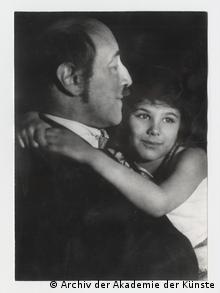 Alfred Kerr holds his daughter Judith in his arms. The photo was taken between 1931 and 1934

The sudden end of a happy childhood in Berlin

Judith Kerr was born in Berlin in 1923. Her father Alfred Kerr was the most central theater critic of the Weimar era, and her mother Julia Kerr, née Weismann, was a composer.

When Hitler became Imperial Chancellor in 1933, Alfred Kerr fled to Prague. In March, Judith, her two-year-older brother Michael and her mother also secretly left their beautiful house in the idyllic wooded suburb of Berlin-Grunewald — just before the secret police tried to seize their passports. They met up with their father in Switzerland.

Swiss German and another move

There, Judith learned her first "foreign language": Swiss German, with all its notoriously difficult and unique pronunciations. "The other children at school always tested me to see if I knew the language. The test word was "Chuchichäschtli" — kitchen cabinet."

But Switzerland was only a brief stopping point. Just as the children had become used to their new surroundings, they had to move again, this time traveling through the south of France to Paris, where by 1934 many German refugees were living.

There, Alfred Kerr hoped to get writing assignments that had eluded him in Switzerland.

Judith did not know a single word of French, but she grit her teeth and learned the language so quickly that after just one year, she received top marks in her end-of-the-year school tests.

'Isn't it wonderful to be a refugee!'

One time, Judith Kerr recalled, she was standing with her father on the balcony of their small rooftop apartment — the upper ones were cheaper — and looking over the rooftops of Paris. "And then I must have said to my father, 'Isn't it wonderful to be a refugee!'" Kerr said, smiling. "That must have upset him since it was all unbelievably difficult for my parents. But they made do in such a way that we barely noticed it."

It was only decades later, while sorting through her parent's correspondence, that she learned her mother had contemplated suicide and had wanted to take the children with her to the grave. 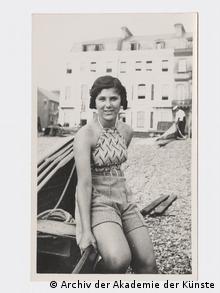 Judith Kerr was a teenager when WWII began in 1939, the same year this photo of her was taken

"I saw the date on the letter and thought, that was written right at the time when I was learning French. It would have been really annoying if I had died, just when I was able to speak French." It's refined, but very dark British humor.

The year 1935 brought yet another move, but Kerr's parents managed to offer Judith and her brother a secure home. This time they went to London, again with the hope of assignments for Alfred Kerr.

Meanwhile, the family savings were more or less depleted. Judith's mother kept the family afloat with odd jobs while her father sat in his room writing texts that he could rarely sell.

By that time, Judith was well versed in learning new languages, and the family was soon speaking English with one another.

The Second World War then started in 1939. Judith Kerr was 17 years old when the German Air Force bombed London. She worked for the Red Cross, organizing the distribution of clothes for British soldiers.

Then, one day, she got a phone call from Cambridge, where her brother Michael was studying law. He had been arrested for being an "enemy alien" and was interned. It made no difference that he had to flee the Nazis because he was a Jew and was waiting for confirmation in becoming a British citizen.

Through connections, Michael managed to free himself from the internment camp on the Isle of Man. He immediately signed up to be a pilot with the British Royal Air Force and fought against the Germans.

"At the end of the war, it was quite clear to me that this was my home," Judith Kerr said. "That naturally was not the case for our parents. They belonged nowhere."

In her autobiographical trilogy of novels for young adults ("Pink Rabbit" is one of them), Judith Kerr impressively showed how escape and new beginnings affect a family. But she only really began to write after the death of her parents. Alfred Kerr died in 1948, her mother in 1965.

By this time, Judith Kerr's son and daughter were around the same age as she and her brother were when they were forced to leave Germany in 1933. "And then I thought, I would really like to write a book for my children, to show them what it was like then." "Pink Rabbit" was published in 1971 and became a worldwide success. In Germany, it became a part of school curricula, and a film version of the story by German Oscar winner Caroline Link has been announced.

The one hour granted to us by her agent for the interview ultimately turned into nearly two and a half. Judith Kerr is a fantastic storyteller. I was mesmerized listening to her.  She, too, seemed to enjoy telling us about her life. 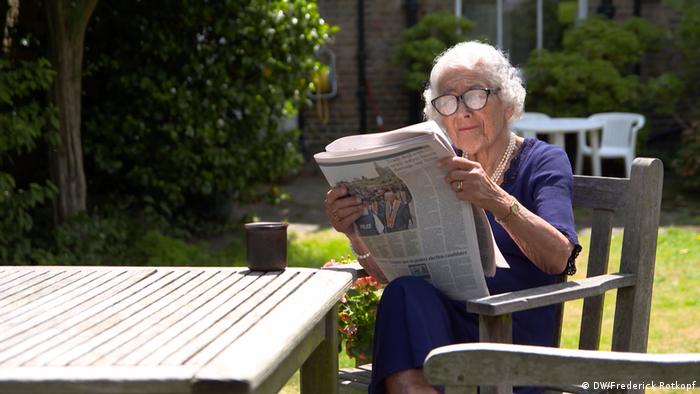 Judith Kerr is at home in her garden in south London, where she has lived for over 80 years

As things wrapped up, we filmed her in her garden. Slightly hunched, but taking confident steps, she strode across the lawn, nimbly stepping over the camera and sound cables that we had installed. Outside, the planes overhead were even louder. The cat hid itself in the bushes. And we forgot to take a photo with her as a souvenir. By the time the idea occurred to me, we had already stowed the camera equipment into our crew car and waved goodbye to Judith Kerr one last time.

That, however, was truly not the end of the world. The encounter with Judith Kerr will remain in my memory forever, even without the photo.

Discover more about Judith Kerr and other artists who had to find home in a foreign land in DW's online feature "After the Escape."

After the Escape - Finding a Home in a Foreign Land

They come from four continents and have one thing in common: They fled to a foreign nation to escape war, misery or persecution. (23.11.2017)

12 German children's books classics you can read in English

Whether you'd like to introduce your kids or yourself to German culture, a good place to start is with literature for children. From moralist fables to surreal adventures, here are a few of the country's favorites. (04.04.2017)