Thousands of anti-abortion activists have taken to the streets across the country to protest against a new bill to legalize abortion. The bill is backed by President Alberto Fernandez. 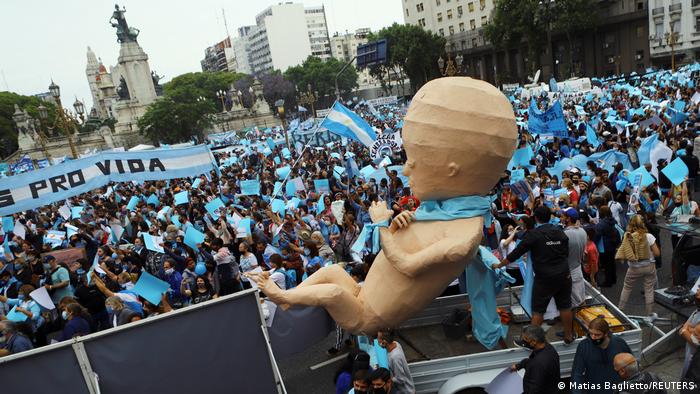 Thousands of people have held demonstrations across Argentina against a new government-backed bill to legalize abortion.

Protesters were seen taking to the streets on Saturday with Argentine flags and sky-blue scarves which identify the anti-abortionists. They also carried signs with slogans like "Save Both Lives!" and "March for the Unborn."

The protest, called by some 150 civil society organisations, was also supported by Catholic and evangelical groups.

The largest group mobilized in capital, Buenos Aires, in front of the Palace of the Argentine National Congress, where a debate on the legislation is expected to begin next week.

Jorge Gomez, executive director of Aciera, the Christian Alliance of Evangelical Churches of Argentina, called the protest a "spontaneous outpouring."

Meanwhile, the National Campaign for the Right to Legal, Safe and Free Abortion called on supporters to "paint Argentina green in coming weeks" and wave green handkerchiefs to symbolize women's rights.

Bill a proposal from President Fernandez

This is the ninth time that a bill to legalize abortion has been introduced in the parliament in Argentina, a Catholic-majority nation and also the homeland of Pope Francis.

The last bill was introduced in 2018. While it had gained support in the Chamber of Deputies, it was rejected by the Senate.

In a first for such legislation, the new bill has come as a proposal from President Alberto Fernandez — one of his campaign promises.

Fernandez has said the bill would guarantee "that all women have access to the right to comprehensive health care."

It allows access to termination of pregnancy up to the 14th week, and beyond that time if the woman has been raped or is in danger of being raped — the only two situations for which abortion is currently legally permitted in Argentina.

Argentina's parliament is again debating the liberalization of abortion laws as citizens on both sides of the argument protest en masse. After the issue has divided the country for years, could there finally be a change?

Opinion: Argentina's women will fight on

Argentina's failure to pass a law legalizing abortion is an historic missed opportunity. Nevertheless, the country has grown through engaging in this debate on women's rights, says DW's Veronica Marchiaro.