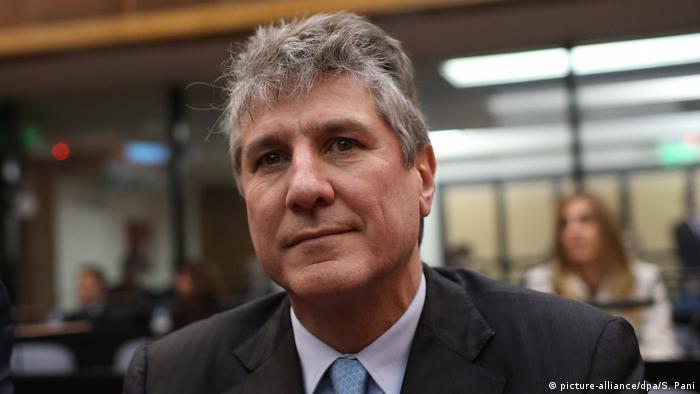 On Tuesday, a court in Argentina sentenced former Vice President Amado Boudou to five years and 10 months in prison for corruption.

Boudou served as minister of the economy and then as vice president under former President Cristina Fernandez Kirchner between 2009 and 2015. Boudou is the highest-ranking official in the Kirchner administration to be convicted of corruption.

Kirchner, herself also currently faces multiple corruption allegations. The former president enjoys diplomatic immunity, however, as she is currently serving as a senator.

Boudou was accused of secretly trying to buy the money-printing house Ciccone Calcografica in 2010 while he was economy minister. He reportedly used shell companies and middlemen in his attempt to gain control. The court determined the deal was "incompatible with public office." Five other businessmen, including the company's owner Nicolas Ciccione and Guido Forcieri, Argentina's former representative to the World Bank, were also found guilty of co-conspiracy in the case.

According to the court, Boudou used his influence over the central bank to help save the printing house from bankruptcy. The deal would have given Boudou and his co-conspirators tax exemptions and lucrative government contracts. Ciccone Calcografica was given contracts by the central bank to print the Argentine peso and campaign material for the electoral ticket Boudou shared with Kirchner.

Boudou claims the conviction was a case of political revenge, saying: "Those that stay in the lane that the powerful decide walk without problems. Politicians that decide to change reality are persecuted." Boudou is now banned from ever holding public office again.

Cases against politicians accused of corruption have picked up speed since Mauricia Macri became president in 2015. Previously it was thought that those in power could act with impunity.

Recently, the local newspaper La Nacion published the contents of a notebook kept by a former administration chauffeur who claims he transported millions of dollars in bribe cash as part of a system in which Argentine construction bosses were pressured to make "election donations" to Kirchner as well as her late husband Nestor Kirchner — whose office she assumed after his death — in exchange for governmentr contracts.

One such businessman, Juan Carlos de Goycoechea, surrendered to police last Friday in return for protection under the country's "accused collaborator" program. Some 16 officials and business executives have been arrested in a number of police raids over the last several days.

Observers have likened the broadening scandal to "Operation Car Wash," in Brazil, which has rocked the country's political and business establishment by uncovering a multi-billion dollar network of bribes and kickbacks. Currently, former Brazilian President Luiz Inacio Lula da Silva and a number of business executives are behind bars there.

Argentina's Senate faces a historic vote to legalize abortion. Its youth have been especially vocal about it, with many young women and girls especially defying Catholic values in Pope Francis's home country. (07.08.2018)

Inflation has hit 25 percent, the Argentine peso has lost about 20 percent of its value against the US dollar, and the federal budget is in deficit. The government hopes the IMF loan will get the country back on track. (08.06.2018)

A court in Argentina has issued an arrest warrant for former President Cristina Fernandez de Kirchner for allegedly covering up a bombing. A judge has requested her judicial immunity be lifted. (07.12.2017)