Are Southeast Asian nations meeting their climate commitments? | Asia | An in-depth look at news from across the continent | DW | 30.10.2021

As one of the regions most vulnerable to the effects of climate change, Southeast Asia knows the extent of the risk more than most. But is the region doing enough to take the problem seriously? 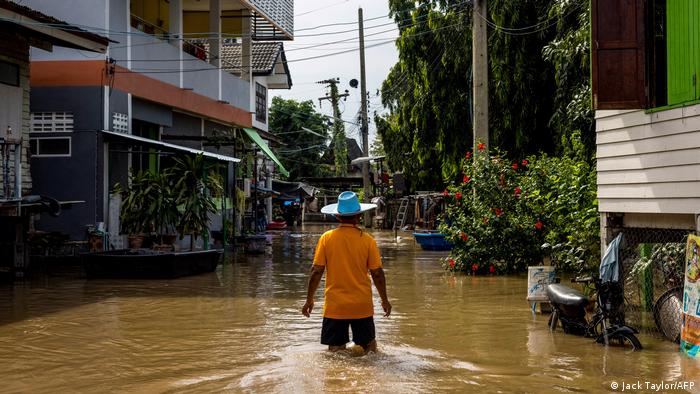 Southeast Asians view intense rainstorms and flooding as the most serious impact of global warming, a survey found

Southeast Asia is among the world's most at-risk regions when it comes to the impact of global warming. The UN Intergovernmental Panel on Climate Change (IPCC) warned in its most recent report that the region is facing rising sea levels, heat waves, droughts and increasingly intense rainstorms.

"Recent studies estimate that up to 96% of the ASEAN region is likely to be affected by drought, and up to 64% affected by extreme drought," Benjamin P. Horton, director of the Earth Observatory of Singapore at Nanyang Technological University, told DW.

"Future sea-level rise will affect populations, economies and infrastructure of every coastal nation," he added.

During last year alone, almost 5 million people were affected when Typhoon Vamco battered the Philippines and Vietnam in November 2020while 289 people died in the floods caused by tropical storm Linfa in Cambodia, Laos, Thailand and Vietnam just a month earlier, according to a September report by the International Federation of the Red Cross and Red Crescent Societies and its climate center.

A climate survey by the ISEAS-Yusof Ishak Institute found that Southeast Asians view the increasingly intense rainstorms and flooding as the most serious impact of global warming.

Most countries in the region have pledged to speed up reductions in greenhouse gas emissions as part of the 2015 Paris climate agreement, the main goal of which is to limit warming to under 2 degrees Celsius (3.6 degrees Fahrenheit) relative to pre-industrial levels.

They have also passed laws and policies to address climate change — but more can still be done, according to Melinda Martinus, a lead researcher at the ISEAS-Yusof Ishak Institute.

"I believe there will be many more developments coming from the region as businesses and governments face pressure to take more action to address climate change. Hopefully, those will be much more ambitious," Martinus told DW.

While climate change has repeatedly been identified at ASEAN summits and meetings as a critical regional challenge, concrete action is still lacking.

"Clearly, these visions need to be articulated into much clearer programs and strategies in the near future," said Martinus.

Though the country — the world's top exporter of thermal or steam coal, used to generate electricity — has plans to phase out fossil fuel for electricity generation by 2056 and has pledged not to commission any additional coal power plants, it is still 60% powered by coal.

Meanwhile, Thailand pledged in 2015 to reduce its emissions by 20% by 2030 with newly announced proposals to achieve carbon neutrality by 2065 to 2070.

But even if it achieves those targets, the country would still be 15 to 20 years behind the timeline set by the UN, including reaching zero greenhouse gas emissions by 2050, the principal goal of the COP26 climate summit being held next week in Glasgow.

Andrew Beirne, the UK's economic and prosperity councilor, said last week that Thailand should raise its 2015 target of reducing emissions by 20%, suggesting the country could achieve a 30% reduction, according to local media.

The manufacturing and transport sectors are expected to make severe cuts — nearly 73% of the entire goal — but power production, the biggest contributor to emissions, is only required to reduce them by around 20% to meet the current target, according to Thailand's road map for nationally determined contributions (NDC), or emissions cut pledges.

Vietnam has not yet set a net-zero target, but it is looking at boosting its sources of renewable energy and increasing legislation restricting use of coal to reduce emissions.

Singapore has also not set a target date for achieving net-zero emissions.

"By 2050, Singapore currently aims to cut emissions by 50% from their peak, with no definite deadline for reaching net-zero emissions. Other nations, however, have been more ambitious in their targets," said Horton.

Are these goals adequate?

Research group Climate Action Tracker has said that while Southeast Asian countries have varying degrees of commitment to tackle global warming, none are sufficiently acting on pledges made under the Paris climate deal.

"Clearly, those countries should have raised more ambitious targets to help the world limit global heating to well below 2 degrees Celsius," she added.

EU's new carbon scheme — how will it affect trade with ASEAN?

There is concern in Southeast Asia that the potential for more EU tariffs on exports from ASEAN countries will result in a decrease in trade if the cost of imports becomes uncompetitive.

A forest against climate change in Vietnam

Pakistan's Climate Change Minister Sherry Rehman told DW that her country is severely affected by global warming. At the Petersberg Climate Dialogue in Berlin, she has urged world leaders to help the most vulnerable nations tackle the climate crisis.