The far-right populist party Alternative for Germany has held a two-day convention in the northern city of Hanover. Its leaders have called on Chancellor Angela Merkel to step down. 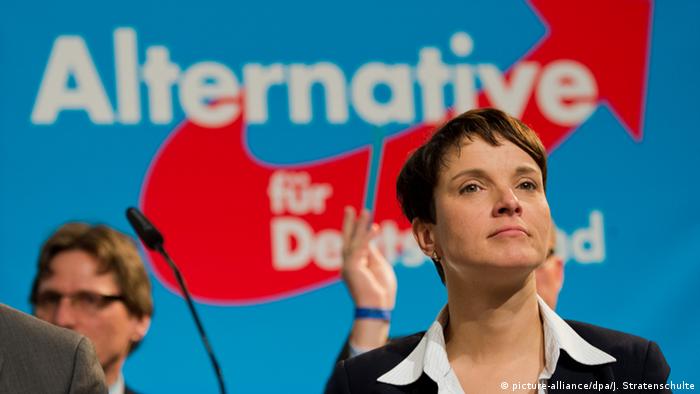 At its annual two-day convention in Hanover on Sunday, the leaders of far-right party Alternative for Germany (AfD) predicted a high voter turn-out, while also calling for Merkel's resignation.

Jörg Meuthen, co-chair of the party, said as many as two-fifths of German voters could throw their support behind the party for the parliamentary elections in 2017.

"We have a voter potential of as much as 20 per cent," Meuthen said to an audience of some 590 AfD delegates.

Calls for Merkel to step down

AfD's other co-chair, Frauke Petry (pictured), said the chancellor should step down over her handling of the refugee crisis.

"Merkel, step down. You can do it," Petry said, riffing on the chancellor's slogan "We can do it" used to muster support for dealing with the refugees.

Petry also took to Twitter on Sunday to criticize the German government's involvement in the ongoing Syrian war. "Every day hundreds of able-bodied Syrians come to Germany, and we're sending our boys to fight in a war that can't be won militarily," she tweeted.

Despite some internal struggles - including the resignation of the party's founder, Bernd Lucke - AfD has seen a notable resurgence in recent months, fueled by German anxiety over the influx of refugees from the Middle East.

A polling organization in November showed AfD to be at the third largest political party in Germany, at 10.5 percent.

Alternative for Germany is holding its annual convention in Hanover. The faction that hung on to the initials after the AfD's stunning split this summer intends to venture into the future united. (28.11.2015)

Some 5,000 supporters of the right-wing Alternative for Germany (AfD) have protested in Berlin against Germany's refugee policy. The demonstrators called for Chancellor Angela Merkel to step down. (07.11.2015)

Björn Höcke, from the right-wing Alternative for Germany, awoke uncomfortable memories with his speech invoking "a thousand years of Germany." But his appeal to far-right radicals is vital to the party, analysts say. (23.10.2015)