After the Alternative for Germany's historic election result, opponents of the far-right populist party have taken to the streets of Berlin, Hamburg and Cologne in protest.

Just hours earlier, the Alternative for Germany's (AfD) earned an estimated 13 percent of votes in the German national election, ensuring that the young party would enter the Bundestag, Germany's lower house of parliament.

The crowd was continuing to grow outside the building where the AfD was celebrating their historic election result. Protestors chanted slogans such as, "Racism is not an alternative," "AfD is a bunch of racists" and "Nazis out!"

Later, the crowd shouted as one, "The whole of Berlin hates the AfD!" The party currently holds 23 out of 160 seats in the Berlin city parliament.

Police were monitoring the situation and prohibiting the protesters from drawing close to the building housing the AfD's victory party. According to security personnel, AfD supporters were cleared from the building's balcony after demonstrators on the ground threw objects in that direction, Reuters reported.

Berlin police also reported that some of their officers were also pelted with bottles and rocks.

'It's important that we speak up against racism'

DW's Kate Brady spoke with some of the anti-AfD protesters at Alexanderplatz in Berlin. Lisa, 22, expressed her belief that such protests would become common.

"Especially in times like these, I think it's really important that we speak up against racism and xenophobia and against the right-wing ideologies that the AfD unfortunately stands for."

Similar anti-AfD protests also took place on the other side of the country in Cologne. There, some 400 demonstrators met in front of the west German city's central train station before marching through the streets while carrying a banner that read, "Whoever is silent, is complicit."

In Hamburg, anti-AfD protestors marched from the central station toward the city hall and the far-right party's local headquarters. There were no reports of violence.

Around 800 protesters took to the streets in Frankfurt, while in Leipzig local media reported that around 500 to 600 people were marching toward the city hall to protest the AfD's results. 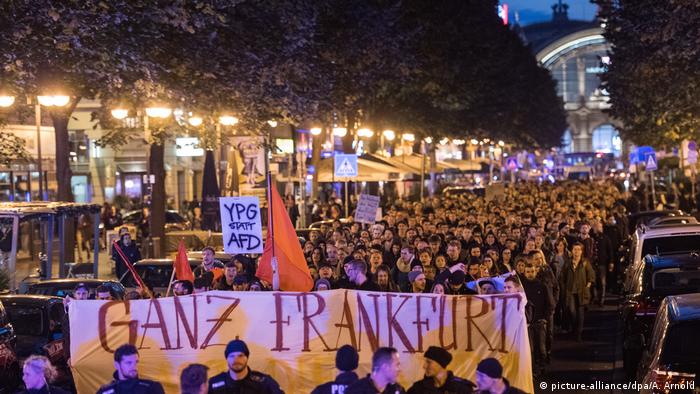 The AfD is set enter the Bundestag as the third-largest party, after Angela Merkel's Christian Democratic Union (CDU) and the Social Democratic Party (SPD). It already holds seats in various state parliaments in Germany.

Since its founding four years ago as a euroskeptic party, the AfD has moved to the far-right with anti-immigration policies and calls to review how German public memory of the Nazi era is defined.

Jewish groups have condemned the AfD's electoral advance. Ronald Lauder, the head of the World Jewish Congress, said it was "abhorrent that the AfD party, a disgraceful reactionary movement which recalls the worst of Germany's past and should be outlawed, now has the ability within the German parliament to promote its vile platform."

Josef Schuster, the president of the Central Council of Jews in Germany, said his worst fears had come true. "A party that tolerates far-right views in its ranks and incites hate against minorities in our country is today not only in almost all state parliaments but also represented in the Bundestag.

"I expect all our democratic forces to unveil the real face of the AfD and to expose the party's empty, populist promises," he added.

Leading far-right lawmakers around Europe welcomed the AfD's entry into the Bundestag. The leader of France's National Front, Marine Le Pen, took to Twitter to congratulate her "allies," writing: "This is a new symbol of the awakening of the European people."

Geert Wilders, the head of the Netherlands' far-right Dutch Party for Freedom, posted a picture of himself alongside the AfD's Frauke Petry and Le Pen under the caption: "We will fight for our countries and our people. Always."