Werder Bremen's sensational unbeaten run has finally come to an end. Alexander Nouri's side traveled to Cologne unbeaten in 11 Bundesliga games, but Anthony Modeste scored twice in a seven-goal thriller. 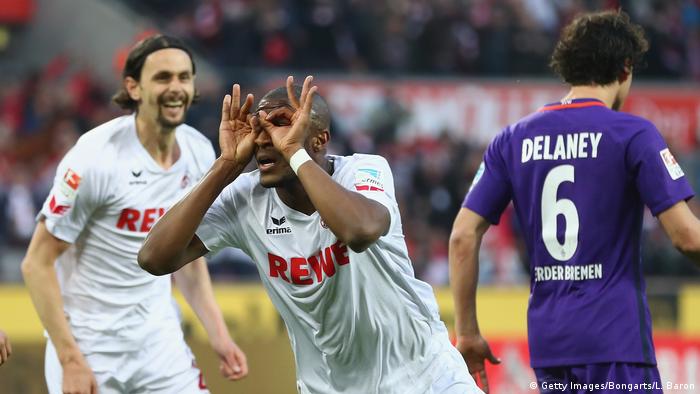 Cologne moved back into the Europa League spots by stopping high-flying Werder Bremen 4-3 in an entertaining Bundesliga match on Friday night.

Anthony Modeste scored a brace and Leonardo Bittencourt and Simon Zoller get the other goals as Cologne ended a run of four games without victory.

Fin Bartels, Theodor Gebre Selassie and substitute Serge Gnabry struck for Bremen who fought from 2-0 down to 2-2 before being beaten for the first time in almost three months after an unbeaten run of 11 games had taken them from the danger zone into European contention.

Cologne, who have not played in Europe in 25 years, moved into sixth place with 45 points, ahead of Bremen on goal difference. 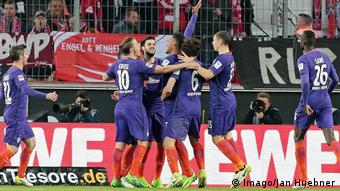 Bremen fought back from 2-0 down to make it 2-2, but couldn't stop a rampant Cologne.

"It was a deserved win," Cologne sports director Joerg Schmadtke told Sky Sports. "This is a special moment for Cologne and the club. We have taken the first step. We had to deliver and the team delivered in outstanding fashion."

Bremen coach Alexander Nouri said: "It was a fantastic game. It is bitter that we lost but I can't blame my team. We showed a lot of morale."

Modeste opened the scoring in a penalty area scramble after a corner kick in the 13th, and Bittencourt headed the second in the 28th as Cologne started strongly.

Gebre Selassie shot high from point-blank range in the 43rd which backfired a minute later when Bittencourt headed on a long ball into the path of Zoller who restored Cologne's lead for 3-2 shortly before half-time. 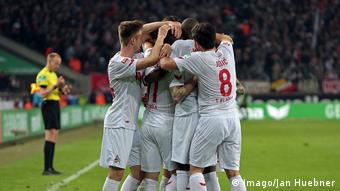 Cologne's victory ends a run of four Bundesliga games without a win.

Modeste smashed the fourth for a season tally of 25 into the near right corner in the 47th but Bremen refused to bow with Gnabry making it 4-3 by sliding into Bartels' cross at the far post.

Gnabry headed high in the 76th while Modeste was denied a hat-trick by goalkeeper Felix Wiedwald with five minutes left as Cologne hung on to win in the 100th Bundesliga game of their coach Peter Stoeger.