Turkish Foreign Minister Mevlut Cavusoglu says Turkey and Saudi Arabia could send troops to Syria if a strategy were in place. Riyadh has already said it plans to send warplanes to Turkey's Incirlik air base. 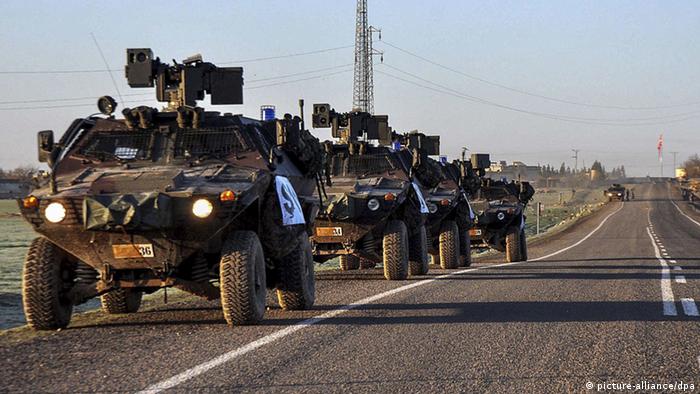 On Saturday, Cavusoglu told Turkish newspapers that the two countries could embark on a land campaign against "Islamic State" (IS) should it prove necessary.

"If there is a strategy ... then Turkey and Saudi Arabia could enter into a ground operation," Cavusoglu said, adding that Riyadh was sending warplanes to the Incirlik air base in Turkey.

"Some say Turkey is reluctant to take part in the fight against Daesh, but it is Turkey that is making the most concrete proposals," Cavusoglu said, using an Arabic name for IS.

Both Turkey and Saudi Arabia have been accused of doing too little in the fight against IS - and even helping the militant group - since it took control of large swaths of Iraq and Syria.

Asked if Saudi Arabia might send troops to the Turkish border to launch operations in Syria, Cavusoglu said: "This is something that could be desired, but there is no plan."

"They (Saudi Arabia) said: 'If the necessary time comes for a ground operation, then we could send soldiers.'"

The Turkish foreign minister said Saudi Arabia had sent a reconnaissance team to the Incirlik base - already a key staging post for sorties against IS by Britain, France and the US.

War in Syria - Is Putin Winning?

Relations between Turkey and Saudi Arabia have warmed significantly in recent months after being damaged by Saudi Arabia's role in the 2013 ousting of Egyptian President Mohammed Morsi. Turkey has also been fostering closer relations with other Gulf states such as Qatar, another major opponent of Assad.

On Saturday, government forces were said to be poised to advance Raqqa, IS's de facto capital in Syria. The British-based Syrian Observatory for Human Rights said troops loyal to Assad were just a few kilometers from the provincial borders of Raqqa, having made a rapid advance eastwards from the town of Ithriya along a desert highway.

The floating of possible ground operations by Turkey and Saudi Arabia comes ahead of an anticipated scramble for territory that might be ceded by IS.

Further movement toward Raqqa from the southwest would give the Syrian government a firm foothold in the province for the first time since 2014. US-allied Kurdish forces are also fighting IS in Raqqa, approaching from the northeast.

In an interview with the AFP news agency on Friday, President Bashar al-Assad vowed to recapture the whole of Syria and to continue the fight against terrorism. In the interview, released swiftly after a deal on a cessation of hostilities among certain parties in the civil war was reached, Assad said he saw a risk that Saudi Arabia and Turkey might intervene militarily. Russia, itself conducting airstrikes in Syria, has warned of the danger of a "permanent war" protracted by foreign ground intervention.

Both Ankara and Riyadh have said they see the ousting of Assad as essential to the ending of Syria's civil war, which began almost five years ago.