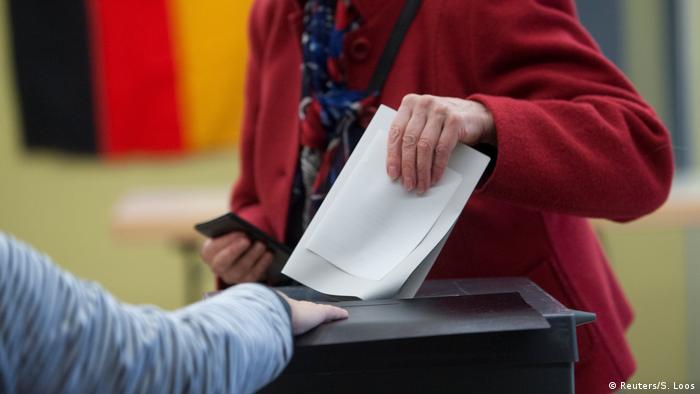 Three weeks after German voters handed Chancellor Angela Merkel's Christian Democratic Union (CDU) its worst result in decades, she suffered another setback on Sunday in a vote that was seen as gauging the mood of the country just one day before political leaders begin federal coalition talks.

The far-right populist Alternative for Germany (AfD) could make its way into the state parliament on 6.2 percent. It marks the 14th of Germany's 16 state parliaments where the AfD has won seats.

The Left's 4.6 percent result means that despite increasing its share of the vote by 1.5 percentage points it won't make it over the 5-percent hurdle for parliamentary representation.

"This is a great evening for the Lower Saxon SPD," Premier Stephen Weil said after the first results were released.

The leader of the national SPD and the party's top candidate in September's general election, Martin Schulz, echoed Weil's sentiment, congratulating the Lower Saxon SPD for a "magnificent victory." 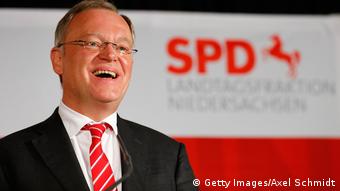 The result is a turnaround for the SPD, which saw its worst performance in a national election since 1949 in September when it garnered only 20.5 percent of the vote. The national SPD leadership has since said it will not enter another "grand" federal coalition with Merkel's CDU and the CDU's Bavarian sister party, the Christian Social Union (CSU).

Despite winning over 30 percent of the vote, Sunday's result in Lower Saxony was the worst performance for the CDU in the state since 1959.

The CDU's top candidate in the state election, Bernd Althusmann, did not evaluate the result negatively.

"We don't need to atone for this," Althusmann said. The state CDU should instead "intelligently reflect upon what to do with this electoral outcome."

The general secretary of the CSU, Andreas Scheuer, was far more critical. "This is a disappointing election evening. You can't describe it in any other way," he said.

The CDU's second place in Lower Saxony follows the party's disappointing performance in September's national election. The CDU and the CSU together scored the most votes, but their combined 33 percent share was their worst result since 1949.

Discussions are set to begin on Monday among the CDU/CSU, the Greens and the FDP to form a "Jamaica" coalition in Berlin. The "Jamaica" coalition is named after the Caribbean country because the three parties' signature colors of black, green and yellow, correspond to the Jamaican flag.

One of the leading Green politicians who will represent the party in the upcoming national negotiations, Jürgen Trittin, said the CDU's poor result in Lower Saxony on Sunday would make it more difficult for Merkel in her talks with the Greens and the FDP.

"[The result] weakens the CDU and that makes talks ... not easier but more difficult," he told German public broadcaster ARD.

Scheuer agreed, saying the CDU's defeat in Lower Saxony was a "fresh alarm" for the CDU/CSU to return to a more conservative position. CSU officials have repeatedly made that demand after their party lost votes to the AfD in Bavaria in the recent national election.

But a more conservative CDU/CSU could alienate the Greens, many of whom already oppose many hardline policies the CSU has recently advocated.

A government renewal or Jamaica in Lower Saxony?

Initial results in Lower Saxony indicate that the SPD and the Greens could — just barely — be able to continue their coalition, but that will remain unclear until the final vote tally.

But the FDP's top candidate for the state election, Stefan Birkner, told news agency dpa that "the FDP was not available for a traffic light coalition," adding his party would only consider entering an administration with the CDU and the Greens.

The election in Lower Saxony was originally slated for January 2018 but was moved forward after a member of parliament for the Green Party, Elke Twesten, left her party in August to join the CDU. She thereby ended the slim majority held by the governing coalition comprised of the Greens and the SPD, making the election necessary.

Merkel had been heavily involved in the state's short election campaign, even making several appearances in local town squares to address voters in person.

The SPD saw a surge in support shortly before the election, with some polls showing the party overtaking the CDU in the last few days of campaigning.

Anything can happen in Lower Saxony's regional election

Three weeks after the federal election in Germany, the state of Lower Saxony is holding an election for a new regional parliament. The poll could reveal voter sentiment as coalition talks are held in Berlin. (15.10.2017)

This Sunday's Lower Saxony regional election could bruise Chancellor Angela Merkel as she tries to forge her next federal coalition government. A new survey shows the northern state's governing Social Democrats ahead. (14.10.2017)