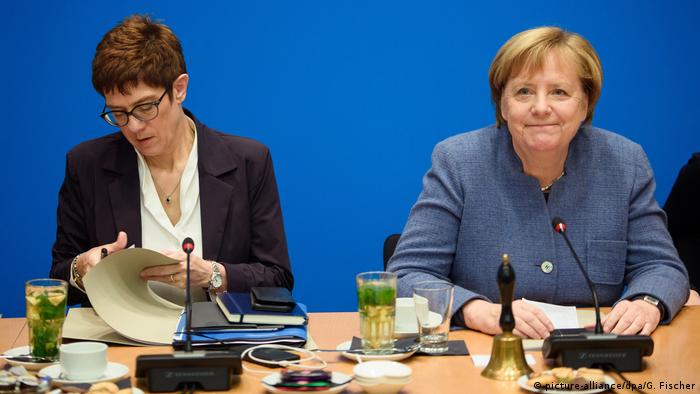 German Chancellor Angela Merkel's successor at the helm of the Christian Democrats (CDU) has told the Die Welt am Sonntag newspaper that the party will scrutinize the chancellor's migration policy since the beginning of the migration crisis in 2015.

"We will look at the entire immigration issue, from the protection of the external border to asylum procedures and integration, from the perspective of effectiveness" Annegret Kramp-Karrenbauer said.

Kramp-Karrenbauer, who replaced Merkel as CDU leader in December, said the party would review the immigration system at a planned workshop in February.

The European Union's border protection agency, Frontex, and Germany's Federal Office for Migration and Refugees would take part in the talks to examine "where and what needs to be improved," she added.

Kramp-Karrenbauer, who was Merkel's favored candidate to take over the CDU, differed from her predecessor on the topic of the 2015 migration crisis and the government's subsequent response.

Merkel said that discussions surrounding what happened in 2015, when more than a million migrants entered Germany, amounted to "wasted time," according to Die Welt am Sonntag. But Kramp-Karrenbauer said she did not fully agree.

"It would be a strange state of affairs if we in the CDU were to approach the topic comprehensively and ignore what happened in 2015," she said.

Immigration has dominated German politics since the migration crisis. The far-right Alternative for Germany (AfD) party has enjoyed repeated electoral successes across the country on the back of an ardent anti-migration platform.

The leaders of Germany's two conservative parties, the CDU and the CSU, have pledged to stick together after a year of public discord. The two sister parties had repeatedly collided over Angela Merkel's migration policy. (05.01.2019)

Judges on Germany's highest court unanimously threw out legal complaints brought by the AfD. They said far-right lawmakers failed to show how Merkel's 2015 decision to let in refugees was a constitutional violation. (18.12.2018)