Germany and the EU need a new industrial strategy to respond to challenges from Asia, German Chancellor Angela Merkel has said at a business summit. She has pledged to discuss the shift with France's Emmanuel Macron. 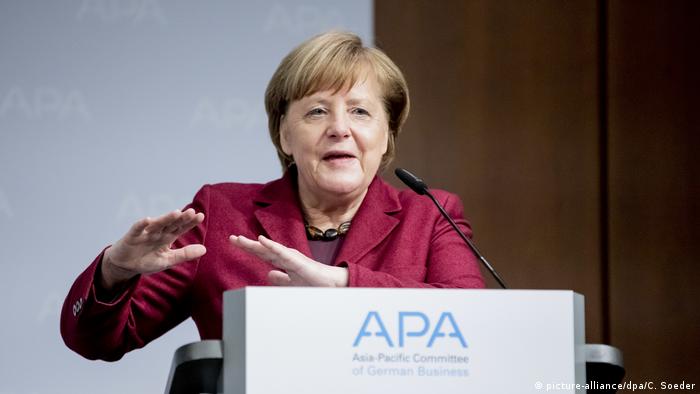 EU politicians and business leaders need to "cooperate very closely" in creating a strategy for the bloc's industrial sector, German Chancellor Angela Merkel said at the meeting of the Asia-Pacific Committee of German Business (APA) on Tuesday.

"We are all able to feel that tectonic shifts that are currently taking place," Merkel said, referring to the growing impact of China and other developing economies. "We cannot just keep going with the [policies] we developed 10, 20 years ago."

Many countries in Asia pursue long-term economic strategies. China, for example, uses state subventions in specific sectors of its industry with the intent to close the technological gap with Western companies and position itself as the market leader.

In dealing with countries like China, Merkel said there needs to be more of a focus on protecting intellectual property and treating businesses fairly.

The chancellor also called for an overhaul of the EU's policies on competition, and for German businesses to overcome the traditional gap between companies and state officials.

France, Germany to team up

On Tuesday, Merkel said she would discuss the issue with French President Emmanuel Macron at a meeting set for the following day, as well as at an EU summit in March.

The APA meeting saw the head of German electronics and appliances giant Siemens, Joe Kaeser, take over as chairman of the business group.

Speaking at the conference, Kaeser asked his peers and political leaders to act "much more strongly" in support of free trade, open markets and fair competition.

"In this, the dialogue with China takes on a key role," he added. "We need to speak with one voice — at best, a European voice."

Kaeser also called on Germany to build up its presence in Asia and devote more funds into research and development.

"We are only relevant for partners in Asia as long as we are leaders in our fields."