Amnesty International reports on child labor behind smartphone batteries | Asia | An in-depth look at news from across the continent | DW | 19.01.2016

A new AI report claims that cobalt mined in the Democratic Republic of Congo by child laborers is finding its way into the supply chains of global technology and car companies - a move facilitated by a Chinese firm. 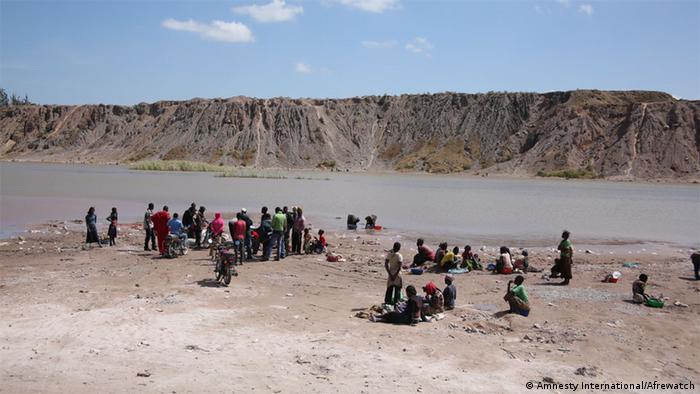 "I would spend 24 hours down in the tunnels. I arrived in the morning and would leave the following morning ... I had to relieve myself down in the tunnels … My foster mother planned to send me to school, but my foster father was against it, he exploited me by making me work in the mine."

These are the words of Paul, a 14-year-old orphan who started mining at the age of 12, speaking to researchers from Amnesty International (AI) about the hazardous working conditions faced by cobalt miners in southern Democratic Republic of Congo (DRC).

In a new report released by the London-based, global human rights campaign group on January 19 and titled,"This is what we die for: Human rights abuses in the Democratic Republic of the Congo power the global trade in cobalt," Amnesty International (AI) documented the perilous conditions under which children - some as young as seven years old - and adults are working to extract cobalt from the mines.

Cobalt is a key mineral in rechargeable lithium-ion batteries used for smart phones, laptops and electric cars. It is estimated that over half of the world's total supply of cobalt comes from the DRC.

By tracing down how the mineral is traded, the report reveals that miners in the southern region of the DRC sell their ore to independent traders, who then sell it to larger companies for processing and exporting. 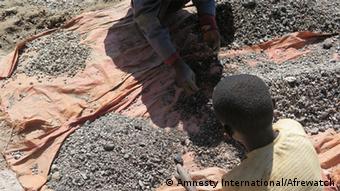 One of the biggest buyers of cobalt in the region is Congo Dongfang Mining International (CDM), AI researchers claimed in the report. CDM is a subsidiary of the China-based Zhejiang Huayou Cobalt Company Limited - one of the world's largest manufacturers of cobalt products.

"CDM is a smelter and therefore processes the ore before exporting it to Huayou Cobalt in China, which then processes it further," said the AI report. The cobalt products produced in Huayou Cobalt are then sold to battery component manufacturers in China and South Korea. "They, in turn, sell to battery makers who claim to supply technology and car companies, including Apple, Microsoft, Samsung, Sony, Daimler and Volkswagen," said the rights group.

In fact, international organizations have already pointed out the problem of child laborers mining cobalt in the DRC, including UNICEF in 2014 and World Vision in 2013.

Not only do these children work long hours in cobalt mines, they also frequently lift and transport heavy loads of the ore, which can weigh as much as between 20-40 kilograms. They also work without protective equipment such as gloves and face masks, which frequently exposes them to high levels of cobalt.

According to the US Center for Disease Control (CDC), chronic exposure to dust containing cobalt can result in a potentially fatal lung disease called "hard metal lung disease," while inhalation of cobalt particles can also cause "respiratory sensitization, asthma, shortness of breath, and decreased pulmonary function."

Although the child miners are not directly working for CDM, Amnesty claims, they are an active part of the company's mineral supply chain.

As economic ties between China and African countries tighten, the Asian giant could make major foreign policy changes and depart from its strict hands-off policy regarding military intervention on the continent. (09.12.2015)

Opinion: China setting an example for others in Africa

China is investing heavily in building up infrastructure and human capital in Africa. Germany should follow its good example. The continent will play a steadily increasing role in Europe's future. (07.12.2015)

For example, the UN Guiding Principles on Business and Human Rights requires companies to carry out "human rights due diligence" - "to identify, prevent, mitigate and account for how they address their impacts on human rights."

The Organization for Economic Co-operation and Development (OECD), on the other hand, provides guidance on how the due diligence should be observed in conflict regions.

The China Chamber of Commerce of Metals, Minerals and Chemicals Importers and Exporters also recently launched similar guidelines, which apply to all Chinese companies that are extracting or using mineral resources or related products in any point of their supply chain.

However, the guidance is not legally binding. Dr. Zhang Yihong, a researcher focusing on Chinese labor law at University of Helsinki, says Chinese companies tend to exploit the weak rule of law in the host countries in pursuit of profit. "This means that if the local legal environment is poorly equipped or designed to uphold human and children's rights, it is very likely that some companies would be able to profit from lowering labour or environmental standards in their operations," said the expert.

And despite Chinese government's initiative to strengthen its oversight of Chinese companies' overseas operations, the regulatory inspections of day-to-day activities of these companies are mostly carried out by host countries, Dr. Zhang told DW.

But referring to the AI report, Deborah Brautigam, a Professor of International Political Economy and China expert at Johns Hopkins School of Advanced International Studies (SAIS), stresses that "it does not say that Chinese companies 'in developing countries' commonly purchase ore from local companies that employ children."

Noting that there are a large number of informal and unregulated mines in the DRC, the analyst said "the Chinese companies profiled by Amnesty are private firms that buy and process ore from Congolese entrepreneurs who manage informal mine operations."

"There are also large, formal Chinese mining operations in the DRC - they are unlikely to employ children," she told DW.

Responding to AI's query about the due diligence policies the company put in place, Huayou Cobalt said the company "rigorously selected" their suppliers and stated that they have developed a code of conduct for suppliers to ensure that "no child labor will be allowed to be hired in the process of provision of goods and services" to the company. 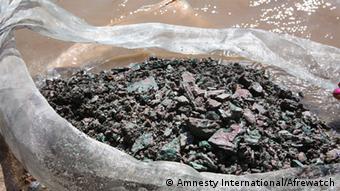 Still, the rights group accused Hauyou for failing to provide details on how they selected suppliers and whether it checked the precise sources of the minerals they buy.

It also criticized global companies for failing to do basic checks to ensure that cobalt mined by child laborers has not been used in their products.

"Many of these multinationals say they have a zero tolerance policy for child labor. But this promise is not worth the paper it is written when the companies are not investigating their suppliers. Their claim is simply not credible," says AI business and human rights researcher Mark Dummett.

In China, analyst Zhang said legally binding human rights and labor standards are lacking to oversee import standards of raw materials. "In recent years, the Chinese government has started to emphasize corporate social responsibility in China's investment in Africa. But so far, this emphasis is mainly reflected in the form of declarations, guidelines, instead of legally binding rules and regulations," Zhang said.

Amnesty calls for the DRC to regulate unauthorized mining activities and to develop adequate systems to prevent child labor in the country. The rights group also calls on the Chinese government to look into the case of Huayou Cobalt, and to enact policies that require companies extracting or processing mineral products sourced from conflict-affected regions to disclose steps that are being taken to manage human rights risks in their operations.

But Dr. Zhang is not optimistic that the Chinese authorities will take immediate action to address the problem.

"As the Chinese government's promotion of foreign investment is not tied to binding human rights standards, it is unlikely that legislative framework regulating this issue will be put into place in the near future," Zhang said. 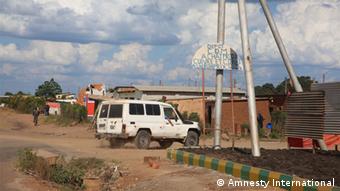 AI says miners in the southern region of the DRC sell their ore to independent traders, who then sell it to larger companies for processing and exporting

China expert Brautigam, however, points out that it's only the United States that requires any reporting on raw material sourcing by law, and even these requirements are very narrow.

They are applicable "only for companies that are traded on the US stock exchange whose supply chains extend into conflict areas in the DRC and the countries surrounding the DRC, and it is only for four minerals: gold, tin, tantalum and tungsten," she said, adding that the EU has proposed something similar but it hasn't so far been passed into EU law.

"I don't see that China will leap ahead of the world's rich democracies to take the lead in requiring due diligence about tracking overseas child labor in the supply chain or making it illegal."