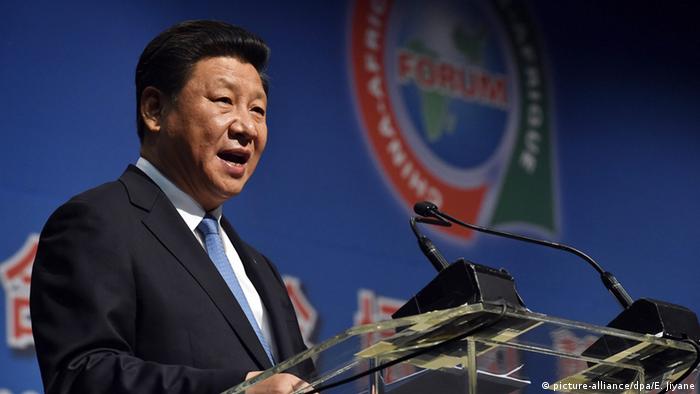 China's President Xi Jinping told African leaders on Friday that his country would provide $60 billion (55.1 billion euros) over three years to fund development on the continent.

Xi is co-chairing the two-day Forum on China-Africa Cooperation (FOCAC) which opened in Johannesburg on Friday. In his speech opening the meeting, he outlined a broad ten-point development plan, saying he wanted to build a relationship of equals.

"To ensure the successful implementation of these ten cooperation plans, China decides to provide a total of $60 billion of funding support," Xi told the summit. The plan would include $5 billion worth of grants in zero interest loans, as well as $35 billion in preferential facility, export credit, and concessional loans.

"These plans are aimed at addressing three issues holding back Africa's development, namely inadequate infrastructure, lack of professional and skilled personnel, and funding shortage," he said.

In addition, the Chinese president announced drought aid for the continent, saying he was "greatly concerned" about the poor harvest caused by the El Nino weather phenomenon. One billion renminbi ($156 million, 143 million euro) worth of emergency food aid would, therefore, be provided to the worst-hit countries.

The FOCAC meeting is being held for the second time since it was launched in Beijing in 2000. Since then, China's trade with Africa has overtaken that of the traditional partners, Europe and the United States.

However, a fall in mineral prices has hit African countries who relied on Chinese demand, with large lay-offs by mining companies in resource-rich countries such as Zambia and South Africa.

Therefore, South African president Jacob Zuma told the summit that the summit was important to "ensure the long term viability of African mining."

And Zimbabwe's president Robert Mugabe, who addressed the summit's opening session as chair of African Union, praised the Chinese leader as a "god-sent person" for Africa.

However, the summit comes at a time of slowing growth in China compounded by rising wages that make the world's second biggest economy less competitive.

Ross Anthony, Director of the Center for Chinese Studies at Stellenbosch University in South Africa, says one solution China is pursuing is industrialization outside its borders.

"If industries can be moved to other parts of the world while still remaining under Chinese ownership, this would be one strategy in which China can start bringing in regions such as Africa when balancing its own domestic economy," he told DW.

Some Africans are wary of strings attached to China's apparent openhandedness. Zimbabwean Janet Munakamwe believes the Chinese will be saying "we have given Zimbabwe this amount of money, so you have to listen to whatever we are going to say. We are the ones who have got the capital in this case."

"It is not colonization if we are selling ourselves. Others might want to imagine it's some form of colonization, but we haven't been pressured by anyone except by our own effort for what the Chinese are bringing."

Over the past decades, Africa's resource-rich nations have attracted massive investments from fuel-hungry China. But its recent slowdown has left Africa vulnerable, as Fathom Consulting economist Oliver White explains. (19.08.2015)