Amnesty International report indicates Syria ′war crimes′ in strikes against IS | Middle East| News and analysis of events in the Arab world | DW | 17.03.2015

Amnesty International has said a series of "ruthless airstrikes" on an "Islamic State" stronghold last year by Syria's government killed more than 100 civilians. Some raids gave "every indication of being war crimes." 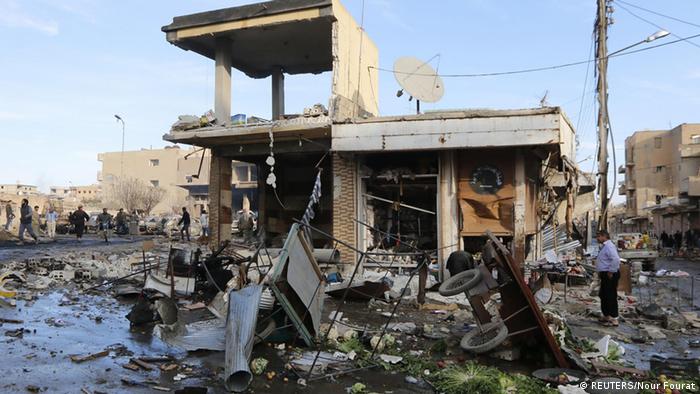 In the new report, published on Tuesday, the London-based human rights group said 115 civilians, including 14 children, were killed in some of the strikes launched on the city of Raqqa by the Syrian regime between November 11 and 29. Non-military targets, including a mosque, a transport hub and a busy market, were also hit in the raids.

Raqqa city is the self-proclaimed capital of the Syrian branch of "Islamic State" (IS), but Amnesty said there was no indication that militant positions were the target of the series of strikes.

"Some of these attacks give every indication of being war crimes," Luther added.

"The government appears indifferent to the carnage caused by these strikes, refusing even to acknowledge civilian casualties they have caused."

Although he acknowledged that Raqqa is an IS stronghold, Luther said the terrorists' presence did not justify attacks on civilian targets.

'Stem the flow of weapons'

Amnesty International also called again on Tuesday for the war in Syria to be referred to the International Criminal Court, saying it would "send a message to all warring parties."

The group also urged an arms embargo to "stem the flow of weapons being used to commit these crimes."

According to the Britain-based Syrian Observatory for Human Rights, more than 215,000 people have been killed in Syria since March 2011, when the anti-regime protests began.

The Syrian government suppressed the demonstrations with force and the situation spiraled into a brutal civil conflict.

Nearly a third of those who have been killed in the four-year conflict are civilians, and around half of Syria's population of 23 million has been displaced by the war.

Opinion: Everyone has failed Syria

Entering its fifth year, the Syrian tragedy continues with "Islamic State" making the situation all the more complex. But the international community is not the only one to have failed Syria, says Rainer Sollich. (15.03.2015)

"Islamic State" militants have continued their path of destruction in Iraq by launching an attack on ancient remains in the 2,000-year-old city of Hatra. In Syria, militants have also been targeting Christian villages. (07.03.2015)