The major German trade union ver.di has called for a two-day strike at Amazon's Bad Hersfeld and Leipzig sites, starting with the Monday early shift. Workers are on strike for the fourth time in a little over a month. 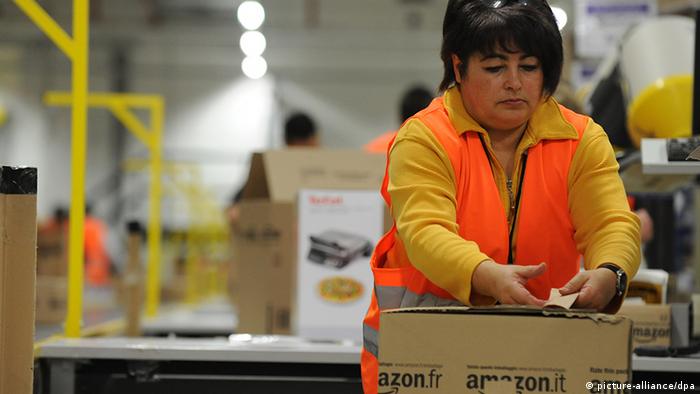 Representatives for the white-collar trade union ver.di said early turnout on Monday morning was "really good." Thomas Schneider of ver.di said that roughly 300 staff in Leipzig were taking part in the strike, before the action began, the union estimated that between 400 and 1,000 workers in Bad Hersfeld would participate.

The Bad Hersfeld site in Hesse is Amazon's largest in Germany, employing more than 3,300 people in total. Roughly 2,000 people work for Amazon in Leipzig, and around 9,000 people across the country.

For some, temporary employment is an indispensable labor market model, for others it's an instrument of exploitation. Mass joblessness in southern and eastern Europe could worsen that conflict in Germany. (21.02.2013)

Amazon workers have gone on four separate strikes since May 14, calling for changes in pay and conditions. Amazon pays its staff in line with logistics sector norms, while ver.di argues they should receive the higher salaries in line with the retail and mail order sectors. The company says that it pays well by logistics sector standards and that this classification best suits most workers' tasks.

Germany was Amazon's second-largest market after the US in 2012, just ahead of the UK and Japan. The company is the worldwide market leader in e-commerce, also holding the largest share of the German market of any online dealer.

Amazon came under criticism in Germany in February after public broadcaster ARD aired an investigative feature on working conditions for temporary workers - mostly from abroad - brought in to deal with the Christmas rush. The program featured both the Bad Hersfeld and Leipzig sites.