With recent warming in the Alps amounting to roughly three times the global average, the days of skiing on these mountains could be numbered. Is it time to put pressure on ski resorts to take more green measures? 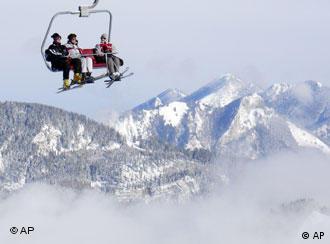 Skiers may be left without snow if global warming persists

In its study of the Alps, the Organization for Economic Co-operation and Development (OECD) identifies Germany's Alps as most at risk, stating that a one-degree rise in temperature from global warming could lead to a 60 percent decrease in the number of naturally snow-reliable ski areas in Germany.

With such a gloomy outlook, the environmental practices of the country's ski resorts are coming under fire. At almost 3,000 meters, the Zugspitze mountain, located in the Bavarian district of Garmisch-Partenkirchen, is a top ski destination. Its numerous snowmaking machines, cable cars and new constructions, however, don't seem to say much for environmental-friendliness.

Greening up their act

Peter Theimer, CEO of Bayerische Zugspitzbahn Bergbahn, the company which runs the Garmisch-Partenkirchen resorts, however, is quick to defend their environmental impact, alluding to the various government regulations which help make his resorts more earth-friendly. 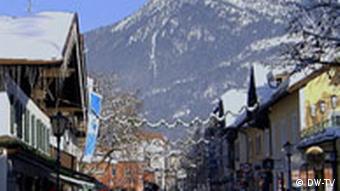 "When we want to expand our skiing area or build a new cable car, we have to pay money to the state of Bavaria so that they can protect other areas," says Theimer. "In addition, for every new cable car that we build, we also have to commit to take away the old one."

Theimer also emphasizes the non-stop train from Munich that his company runs in an effort to reduce the number of skiers and snowboarders who come to the resorts by car. The company also leases the roofs on its cable cars to the local power company to produce solar power.

Considering that much more than the future of alpine sports is at stake though, measures like these may not be enough. Mountain water, also viable drinking water, is being devoured by ski resorts and their snowmaking machines, which need roughly 100 liters of quality water to make enough snow to cover one square meter of ski run.

Furthermore, the noise pollution from snowmaking machines, which mostly run at night, can have detrimental effects on animals' nocturnal behavior.

According to the German Alps Association, the world's largest mountain sports association and an accredited nature conservation organization, a much more significant measure is required than the various steps that resorts like Garmisch-Partenkirchen are taking.

"When we're talking about ski resorts going green, it's important to remember that a ski resort is always a huge encroachment on nature," says Joerg Rueckriegel, the association's Director of Environmental Protection. "Of course it's positive to see resorts taking steps to reduce their pollution, but the most important goal is to limit ski resorts' expansion, to contain them and hold on to our nature." 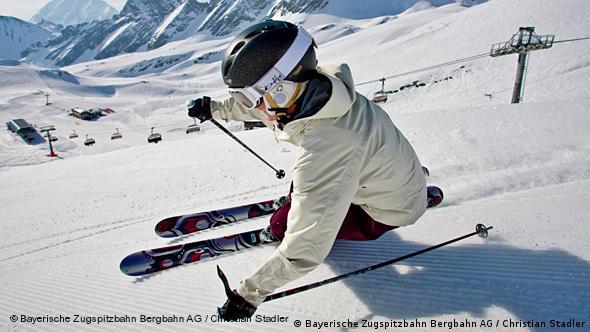 Environmentalists warn that it could all be downhill from here

Limiting resorts' expansion, however, is proving to be a great challenge, as decreasing amounts of snow in lower-lying areas are leading many resort operators to extend their businesses upwards, where there is still a high level of snow reliability.

According to Rueckriegel, this is only a quick fix and soon won't even be an option for places like Garmisch-Partenkirchen.

Mountains have their limits too

"The highest mountain in the Bavarian Alps is the Zugspitze, and it's significantly lower than many peaks in Austria," he emphasizes. "Therefore, the possibility to avoid climate change by moving up the mountain, as is being done right now in places like Austria, is limited."

Peter Theimer, however, isn't too concerned about the future of his resort in view of the dreary forecast presented by the OECD and the German Alps association. If worst should come to worst, he says he has a backup plan.

"We are pretty sure that we can use all the investment that we build now like snow machines, ski slopes, cable cars, during the next 15, 20 years," he says. "And we are building infrastructure for alternative outdoor sports and summer activities so that we do not fully depend on winter."

Skiers and snowboarders, on the other hand, may find little consolation in summer activities should severe climate change in the Alps leave them without snow in the future. But according to Theimer, they are partly to blame should this become the reality. After all, concern over the environmental damage that ski resorts cause with their various constructions isn't stopping skiers and other visitors from taking advantage of all that they offer. Theimer points to the example of a viewing platform currently under construction. 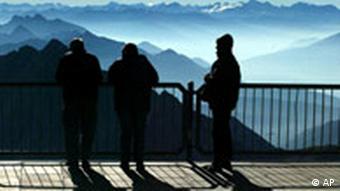 How much compensation can viewing platforms offer?

"At the beginning of construction it was very controversial," he explains. "But when I talk to the people here in Garmisch, they are all very curious to stand on it and enjoy the great views."

This, says Rueckriegel, points to the balancing act that Germany's ski resorts need to achieve - something which is easier said than done.

"You have to build special infrastructure to make your resort attractive for tourists, but on the other hand, these are measures that have an impact on nature. Finding a happy medium surely can't be easy," he says.

Holding a winter Olympics in Munich would be environmentally sound - and help the city come to terms with the tragedy of 1972, argues the Olympic bid committee. (26.10.2009)

Workers began stretching a huge tarpaulin Thursday over parts of Germany's highest mountain in a battle against the effects of global warming on the snow-covered peak -- a process that leaves environmentalists sceptical. (03.05.2007)

Two German men in their forties died of exhaustion and a further six were hospitalized after a 16-kilometer (10-mile) mountain sprint on the Zugspitze, Germany's highest mountain. (14.07.2008)