Workers began stretching a huge tarpaulin Thursday over parts of Germany's highest mountain in a battle against the effects of global warming on the snow-covered peak -- a process that leaves environmentalists sceptical. 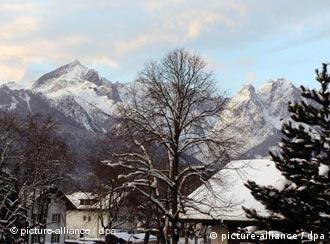 The Zugspitze in Bavaria is Germany's highest peak

About 9,000 square meters (97,000 square feet) of reflective foil has been spread across a ski area on one side of the 2,962 meter (9,718 foot) high Zugspitze in the northern Alps near Garmisch-Partenkirchen.

This year, the Zugspitzbahn company, which finances the cover-up from revenues from its ski-lift, gondola-lifts and restaurant, ordered 50 percent more tarpaulin than last year. The tarps were unpacked one week earlier than usual following a particularly mild winter and the hottest April in recent history.

"The cover keeps off the heat and channels away rainwater," said Manfred Haas, who manages a team that grooms the ski area with bulldozers and graders. "Every autumn we make note of where the glacier has melted the most and cover those places the following spring." 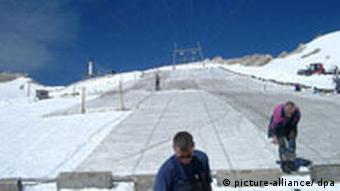 Only the ski area on the mountain is covered with tarps

The process, which only protects part of the mountain, was begun 16 years ago. Though the sun-screen tarps are aimed at curbing the effects of climate change, environmentalists have assailed the annual cover-up as folly.

"It will never save the glacier," he said.

According to Frank Huber from the Zugspitzbahn company, he and his colleagues have no illusions that they will be able to preserve the glacier entirely.

"With the tarps and all the other things we do, we’ll only be able to prolong the process," he told the Reuters news agency. "The Zugspitze lives from tourism and it’s our goal to keep the ski industry running."

All glaciers in danger

The Intergovernmental Panel on Climate Change (IPCC), set up by the United Nations, predicts that many of the world's temperate-zone glaciers will shrink drastically or vanish completely as temperatures rise.

Larger glaciers will have lost between 30 and 70 percent of their volume by the year 2050, reported IPCC.

River-type glaciers in the Alps such as the Pasterze have all but disappeared, while ice sheets high on the mountains, often used for skiing during the summer months, are shrinking.

German meteorologists say that the country must start preparing for extreme weather that could cause numerous deaths due to global warming. Germany has already heated up by 0.9 degrees Celsius in the past century. (25.04.2007)