Extreme Athletes Die in Race on Germany′s Highest Mountain | Germany| News and in-depth reporting from Berlin and beyond | DW | 14.07.2008

Two German men in their forties died of exhaustion and a further six were hospitalized after a 16-kilometer (10-mile) mountain sprint on the Zugspitze, Germany's highest mountain. 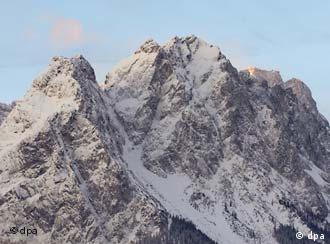 The Zugspitze -- beautiful but potentially deadly

The annual extreme sport event took place on Sunday, July 14, with the runners starting out from Ehrwald, Austria, in driving rain early in the morning. In the course of the race, the rain turned into snow, with contestants also battling icy winds.

The Bavarian Red Cross reported that a number of them subsequently collapsed. Rescue services based in mountain huts were immediately alerted and tried in vain to reanimate two of the athletes.

The weather conditions hampered further rescue efforts, with only two of four helicopters deployed able to land on the mountain.

A total of 80 rescue services from the Bavarian Red Cross and Alpine rescue outposts came to the athletes' aid, with a number of them suggesting it had been foolhardy not to cancel the race given the weather conditions.

According to police in the nearby town of Weilheim, six participants were checked in to hospital in Garmisch-Partenkirchen, suffering from hypothermia and exhaustion.

The race takes place every year, with participants completing in just over 120 minutes a 16-kilometer course which would take normal mountain hikers up to nine hours.

Although the organizers issued weather warnings, the event's Web site did not, apparently, intend the forecast to be seen as a deterrent.

"The conditions…..mean that any contestant who reaches the finishing line is a winner," it reportedly said.

A pilot has successfully landed his plane on Germany's highest mountain in the first such landing in 50 years. (04.05.2008)

Workers began stretching a huge tarpaulin Thursday over parts of Germany's highest mountain in a battle against the effects of global warming on the snow-covered peak -- a process that leaves environmentalists sceptical. (03.05.2007)

Expert: Climate Change to Cause Massive Costs in Germany

The financial costs of climate change could come to as much as 800 billion euros ($1.23 trillion) over the next half century, according to a study by the German Institute for Economic Research (DIW). (26.03.2008)