Energy production in Canada's oil sands region will resume in the coming days after a massive wildfire halted production, Alberta's premier has said. Authorities are assessing the damage in Fort McMurray. 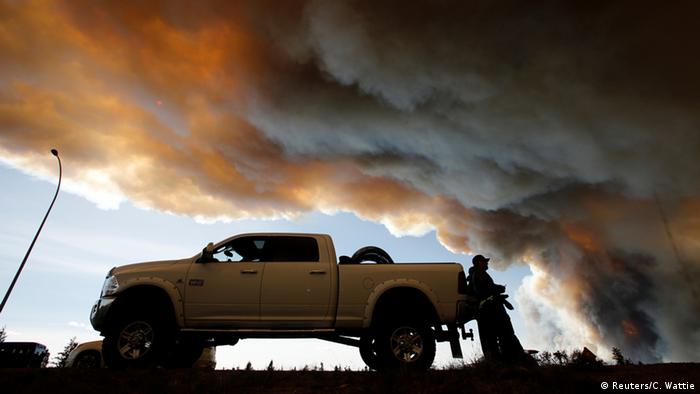 Alberta Premier Rachel Notley said Tuesday after meeting with oil executives that the oil sands facilities north of the town of Fort McMurray had not been damaged by the fires but stressed that authorities would make sure everything was completely safe before restarting production.

More than 88,000 residents were evacuated from the oil boomtown last week, stopping production at the world's third-largest oil reserve.

The wildfire destroyed 10 percent of Fort McMurray, but Notley said hospitals, schools and the downtown area had been spared. Authorities are assessing the damage and prioritizing the restoration of electricity and other services.

'Majority of production has stopped'

It could be weeks before residents are allowed to return, putting oil companies in a difficult spot as they try to restart production. Getting production back up is also being hampered by the logistics of bringing workers back to the city.

"The majority of production has stopped, certainly not all of it, but the majority. If that were to continue for a month or two you would start to see measurable outcomes to our GDP," Notley said.

The fire continued to grow outside Fort McMurray on Tuesday, spreading through the surrounding forests. The original wildfire has joined up with another, covering an area slightly smaller than Luxembourg.

'Now it’s our turn to help them back:' Syrian refugees help victims of Canadian wildfires

The wildfire in Canada has destroyed the homes of thousands of people in Fort McMurray. Many have been evacuated to Calgary, where Syrian refugees are now stepping up to support the victims of the wildfire. (09.05.2016)