Al Qaeda takes over Mukalla army base in Yemen

Al Qaeda fighters have seized a local army headquarters in Mukalla, fueling fears of the terror network expanding its foothold in Yemen. The Islamists now control most of the city. 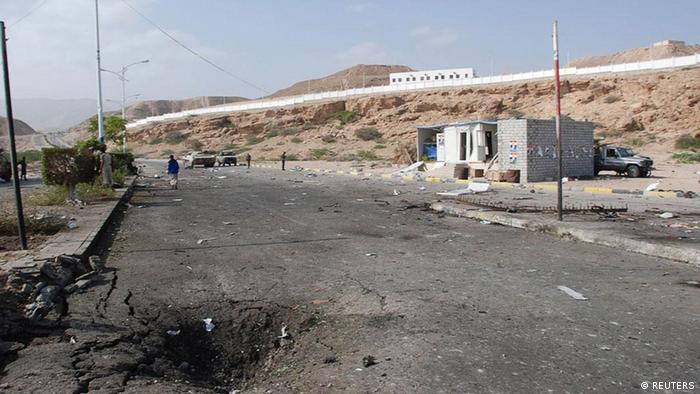 The al Qaeda jihadists killed an unspecified number of soldiers and captured a large cache of military hardware, a security official speaking on conditions of anonymity said Friday.

"The soldiers resisted the al Qaeda elements as much as they could, but they could not stop them from controlling the command headquarters," the official said.

The regional commander and his troops pulled back to military camps near the city's airport, which is one of the few areas not controlled by al Qaeda, according to military sources. The jihadist forces captured a tank and two armored vehicles.

Residents were reportedly fleeing the city in panic, while several hundred al Qaeda fighters were patrolling and setting up roadblocks in the city, flying the black banner of the extremist network.

On Thursday, al Qaeda forces launched simultaneous attacks on several state institutions in Mukalla and have since taken control of most of Yemen's third-largest city. The militiamen have also managed to free around 300 inmates from a local prison, including one of their top leaders.

The Yemen branch of al Qaeda is among the most active segments of the terror network, operating in the country torn by bloody conflict between government forces and Houthi rebels, who took over the capital, Sanaa, in late January.

The conflict has been escalating during recent months, with internationally recognized President Abed Rabbo Mansour Hadi fleeing to his stronghold, Aden, and eventually leaving Yemen for Saudi Arabia last week.

Hadi's government had been a key ally of the United States in the fight against al Qaeda, with Washington often targeting members of the terror network via drone strikes. After the Houthi takeover, the US government pulled its embassy staff as well as special forces that were assisting Yemeni army.

On Friday, Saudi forces airdropped weapons to pro-Hadi forces in Aden, who then managed to push Houthi rebels out of several city districts.

Airstrikes will continue until Hadi is back in power, Saudi officials claim.

At least 519 people have been killed and nearly 1,700 injured during past two weeks in Yemen, and more than 90 per cent of the casualties are children, UN humanitarian affairs chief Valerie Amos said.

"Those engaged in fighting must ensure that hospitals, schools, camps for refugees and those internally displaced, and civilian infrastructure, especially in populated areas, are not targeted or used for military purposes," she said.

Around 40 people, mostly civilians, were killed in an airstrike on a refugee camp this week. Saudis and Houthi forces traded blame for the bombing.

Yemen, the poorest country in the Arab world, borders Saudi Arabia and lies near essential oil delivery routes and the shipping lanes of the Red Sea.