Lufthansa has agreed to allow its low-cost brand Eurowings to rent some aircraft currently operated by loss-making carrier Air Berlin. There will also be massive job cuts at Germany's second-largest airline. 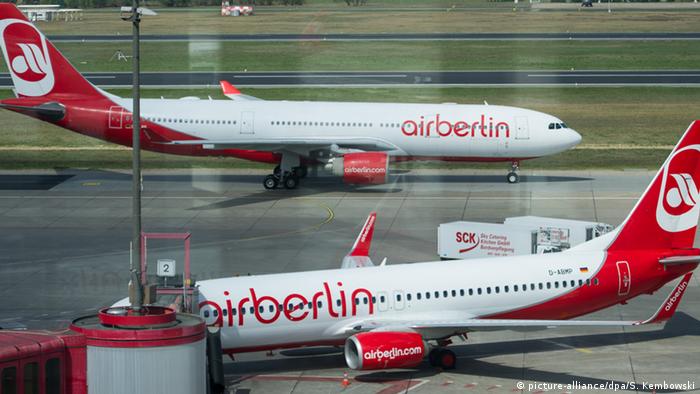 The supervisory board of Lufthansa meeting Wednesday decided to let its low-cost subsidiary Eurowings rent 35 aircraft currently operating under the banner of loss-making carrier Air Berlin. Another five Air Berlin planes are to go to Austrian Airlines. The agreement reached would be valid for six years, Lufthansa executives told reporters.

The renting of Air Berlin planes will allow Lufthansa to bolster its low-cost offering, while letting Air Berlin reduce its fleet after failing to return profits amid increased competition in the budget aviation industry. Air Berlin announced Wednesday night it would also have to slash up to 1,200 jobs. It said the future focus would be on operating a smaller fleet of 75 aircraft at its hubs in Berlin and Düsseldorf.

"It's hard for me to announce job cuts, but we simply have to reduce our workforce; we aim to do this in a socially responsible manner," Air Berlin CEO Stefan Pichler said in a statement.

Air Berlin shareholder Etihad Airways is talking with travel company TUI about a possible combination of airline TUIfly and Air Berlin's Austrian subsidiary Niki. That plan would allow Air Berlin to dispose of over a dozen aircraft.

Separately, Lufthansa said Wednesday that it would take full ownership of Brussels Airlines.

Lufthansa has owned 45 percent of Brussels Airlines' parent company, SN Airholding, since 2009 and kept an option to buy the rest. Now the airline said it would buy the remaining 55-percent stake as well, thus completing a long-mooted takeover.

Shareholders in Brussels Airlines will still have to agree to the deal, Lufthansa said, adding that managers expect to complete the transaction by early 2017.

The companies did not reveal the price Lufthansa would pay for the remaining stake.

Europe's biggest airline has booked solid quarterly results. But amid growing fears of terrorist attacks, more and more people are becoming reluctant to board a plane. This might drag down the industry. (02.08.2016)

Germany's biggest airline has partnered with the Chinese carrier enabling the two companies to operate joint flights between Europe and China. Lufthansa called Air China an "ideal partner" for expanding in Asia. (20.09.2016)

German airline Lufthansa has said it is canceling over 2,000 additional flights at its Frankfurt and Munich hubs due to staff shortages. Its low-cost subsidiary, Eurowings, is also expected to cancel flights.