Ahead of COP26, focus turns to climate finance | Environment | All topics from climate change to conservation | DW | 25.10.2021 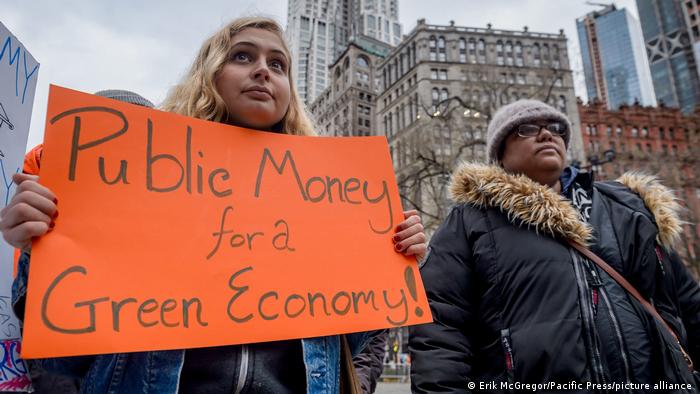 Climate protesters have not let up in their demands for change

Climate experts have stressed that the upcoming UN climate conference, COP26, is the "last, best chance" for the world to come through with a plan to limit global warming to 1.5 degrees Celsius (2.7 Fahrenheit) and help countries move to net-zero emissions.

Managing the green transition and heading off the worst effects of climate change won't be an easy task, neither in terms of policy, nor coming up with the necessary funds to make sure these promises have a chance of success.

"Finance is essential to accelerating the transition to net-zero and achieving the full ambition of the Paris Agreement," said Mark Carney, the COP26 finance adviser to UK Prime Minister Boris Johnson, in the lead-up to the pivotal summit. The COP26 website lays it out in stark terms: "To achieve our climate goals, every company, every financial firm, every bank, insurer and investor will need to change."

How much money is needed?

Developing nations trying to transform their carbon-based economies and find ways to adapt will be looking for the world's richest nations, which are responsible for most of the global carbon dioxide emissions, to make good on an overdue promise of $100 billion (roughly €86.2 billion) a year to help them fund climate finance. And that's just the tip of the rapidly melting iceberg.

Negotiations at COP26 will be focusing on raising even more money after 2025 because $100 billion isn't nearly enough, according to Pablo Vieira, global director of the NDC Partnership, which helps countries achieve their national climate commitments.

"It needs to be considerably more. How are we going to get there if we can't deliver on the easier pledge that has been around for a long time?"

But as of 2019, the last year for which data is available, wealthy nations had yet to even meet their original goal, contributing just under $80 billion according to the Organization for Economic Cooperation and Development (OECD). Estimates from the UN, World Bank and the OECD have shown it will take $6.9 trillion every year until 2030 to meet the world's climate and development objectives. And that was published in 2018, before the COVID-19 pandemic. 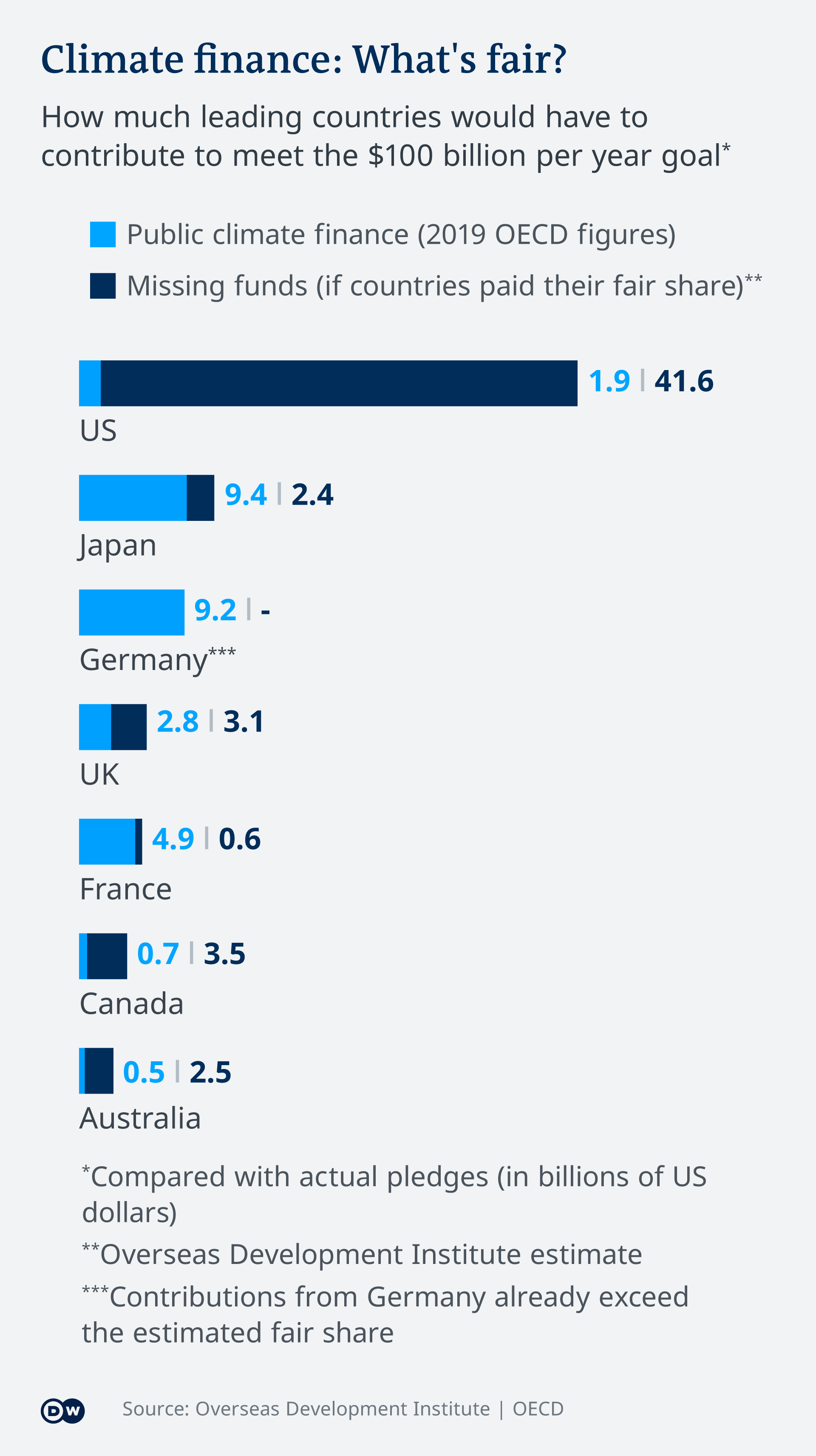 Vieira said even though the original $100 billion isn't enough, it's still crucial that it be met because it will help developing countries unlock additional funds from other sources like international climate funds, development banks and the private sector.

"The $100 billion is almost symbolic, and even being symbolic, it's not being met," said Maria Laura Rojas, executive director of the Bogota-based environment nonprofit Transforma and part of ACT2025, a global group aiming to inform the UN climate talks. "So, you start to see how that gets really frustrating for developing countries."

"Climate finance is going to be one of the big issues [at COP26], because it's about confidence building," said Simon Wilson, head spokesperson for the Green Climate Fund (GCF). He said a failure to come through with the funding pledges would "undermine trust" in the rest of the negotiations.

"The whole idea of the Paris Agreement was to have this mutual agreement that everyone would make these commitments and ramp up their ambition over time. But to get developing countries to do that, they need to have the confidence that there will be support for them."

The Philippines, for example, is aiming for a 75% emissions cut by 2030 — but its national climate plan has said the country can only achieve about 3 percentage points of that commitment on its own. And at a meeting with international climate envoys in Johannesburg at the end of September, South Africa said it would need billions of dollars to replace its polluting coal power plants — which produce 80% of the country's power — with clean energy.

"While South Africa is committed to a just transition, we need certainty and predictability [of financing] … to accelerate this transition," said the environment department. "We do need an irrevocable agreement that we can sign at COP26 where our commitments, as all parties, are clear." As Mining and Energy Minister Gwede Mantashe pointed out at a mining conference a few days later, "We are not a developed economy: We don't have all alternative sources." 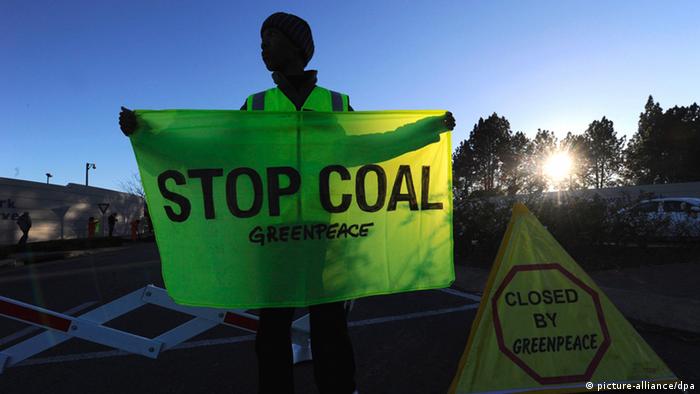 "It's difficult to make those long-term plans unless you have some idea of what's going to be available to you in terms of in terms of finance," said Wilson. He said the GCF has also increasingly focused on making sure adaptation efforts in the least-developed regions in Africa, or island nations in the Pacific and Caribbean, are getting their fair share of cash. For its part, the GCF has allocated over half its funding for adaptation projects, among them sustainable agriculture in Thailand and water security for communities in Kenya.

At an emergency summit in Milan, Italy, at the end of September, UN Secretary-General Antonio Guterres stressed the need for predictable funding for developing nations, 50% of which would be earmarked for "adaptation and resilience" to the climate crisis.

"Adaptation needs are increasing every year," he said. "Developing countries already need $70 billion for adaptation, and that figure could more than quadruple to $300 billion a year by the end of this decade."

For the most part, he said, those funds should come from grants, which do not have to be paid back.

Recent data from the OECD showed that just a quarter of the nearly $80 billion committed in 2019 was for adaptation, with Asia and Africa benefiting from more than two-thirds of the funds. Most of the remaining funds went toward mitigation efforts to cut greenhouse gas emissions.

"Adaptation activities will require grant funding because they will not generate revenue," said GCF spokesperson Wilson. "They're about protecting people from the devastating impacts of extreme weather, or climate change leading to sea level rise, or flooding and drought. And it will always be difficult to do that."

Ahead of COP26, NDC Partnership, with the support of the German government, has helped 67 countries update their long-term goals to reduce emissions known as nationally determined contributions (NDCs). Global director Vieira said they've noticed a substantial shift in the focus on adaptation. He added, however, that funding adaptation projects was more challenging, as it wasn't so easy for potential investors to see the end goal, as compared with lowering emissions.

"It's clear that the majority of [global] funding is going to renewables projects rather than going to adaptation," said Wilson, pointing out that it's easier to attract investors with single large-scale projects like solar plants, for example, which can guarantee a profit, rather than efforts to plan for the wide-ranging health impacts of a climate change.

Meanwhile, the International Monetary Fund has proposed a Resilience and Sustainability Trust that will offer up to $50 billion in funding to help low-income countries "build economic resilience and sustainability" in the face of both climate change and pandemics. The goal is to "help countries transition to low-carbon, climate-resilient, smart, inclusive economies," said IMF managing director, Kristalina Georgieva, adding that climate will be more fully integrated into IMF lending programs.

Still 'a lot of work' ahead

Wilson, Vieira and Rojas were cautiously optimistic about recent moves by the Biden administration and other world leaders to increase their funding pledges. But they stressed that much more needed to be done — including bringing in the private sector and making funds easier to access for smaller players on the regional and local level.

Rojas said there was still "a lot of work" ahead, not just in terms of providing climate finance but also in making sure governments and investors move away from supporting fossil fuel.

"When you look at how much money is flowing into climate action, you might get a little bit hopeful. But then when you look at what's still flowing to fossil fuels and exploration and extraction, that really needs to change or else we're not doing what needs to be done."

Are US Republicans finally waking up to the climate crisis?

Climate change denial has been rampant in conservative America, but something is shifting. A growing movement is advocating for climate action — in its own fossil fuel-friendly way.