'Aftermath: Art in the Wake of World War One' reveals deep scars a century on

Marking 100 years since the end of World War I, a new exhibition at London's Tate Britain explores how artists across Europe responded to the physical and psychological horrors of the "war to end all wars."

It might be a century since the Great War that killed some 40 million people ended, but wars continue to rage across the world as US President Donald Trump threatens to rain "fire and fury" on his adversaries.

As an insight into how artists have responded to the ravages of a nightmare global conflict, "Aftermath: Art in the Wake of World War One," an exhibition opening June 5 at London's Tate Britain, comes at a particularly germane time.

Exploring the immediate impact of the "war to end all wars" on British, German and French art, "Aftermath" showcases over 150 works by artists including George Grosz, Hannah Höch, Pablo Picasso, Otto Dix, Christopher R.W. Nevinson and Käthe Kollwitz, among many others.

This tumultuous postwar period intersected with the emergence of such radical new styles as dada and surrealism, which informed responses to the nature of war, the culture of remembrance and postwar rebuilding.

'Torn, naked and scarred and riddled'

Sometimes controversial paintings captured not the victorious march of great patriotic fighters, but the brutality of trench warfare and the loss of dignity for faceless soldiers caught up in senseless industrial slaughter. Some of the artists had served on the Western or Eastern Front, including English painter Paul Nash, whose watercolors expressed a "torn, naked and scarred and riddled" landscape.

Read more: How artists captured the splendor and misery of the Weimar Republic

In the postwar years, Dada photomontage artists like Hannah Höch parodied the corrupt elites that now spoke of peace, while her colleagues like Grosz and Dix focused on the maimed and disabled veterans and the desperate prostitutes who followed in their wake, all forever marked by war. 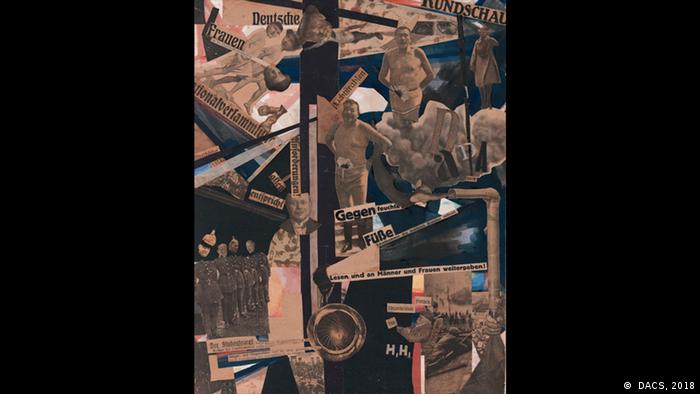 Höch's photomontage, Dada Rundschau, parodied the leaders who advocate both war and peace

Other works tackle mourning and remembrance, with artists like Käthe Kollwitz, Andre Mare and William Orpen commissioned to produce sculptural and painted works to memorialize and commemorate the conflict. However, Orpen's To the Unknown British Soldier in France refused to glorify heads of state at Versailles and was rejected, with the artist instead committed to representing the "the ragged unemployed soldier and the dead."

Click through the picture gallery above to see some of the key "Aftermath" works reflecting the horrors of World War I.

'Aftermath: Art in the Wake of World War One' runs June 5 through September 23, 2018 at London's Tate Britain.

American troops have been stationed in Germany since World War II. The photo exhibition "Little America" at the Allied Museum in Berlin gives a rare glimpse into the lives of soldiers and their families. (23.03.2018)

Illustrator Robert Nippoldt and author Boris Pofalla have published a fascinating book about Berlin's golden era, the Roaring Twenties. It reflects the interest now taken in the art scene of the Weimar Republic. (21.12.2017)

'Aftermath: Art in the Wake of World War One' reflects on the brutality of the Great War

Marking a century since the end of World War I, a new exhibition at London's Tate Britain explores how artists responded to the physical and psychological horrors of the "war to end all wars." (05.06.2018)