There are still five German citizens or dual nationals sitting in Turkish prisons on legally dubious charges, according to Berlin. Ankara has been accused of using terror charges to crack down on political opposition. 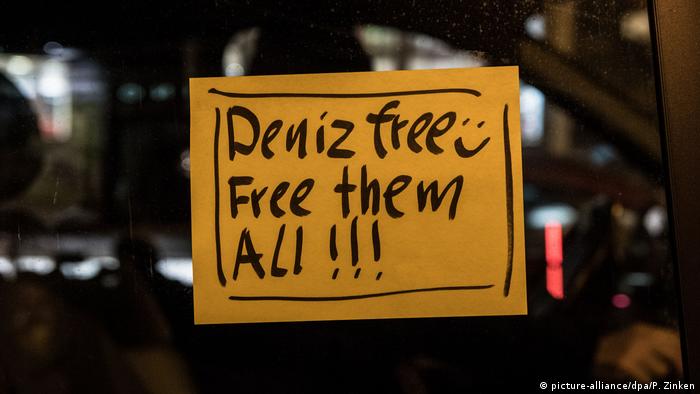 The German government is hoping to use the momentum from the release of journalist Deniz Yücel from a Turkish prison to secure the freedom of five other German nationals. To that end Berlin must stay in contact with Ankara, German Deputy Foreign Minister Michael Roth told broadcaster rbb on Saturday.

Roth reiterated a statement from Foreign Minister Sigmar Gabriel that there had been "no dirty deals" with Turkey in Yücel's case, and that Ankara should "not expect" anything from Germany in return, aside from continued talks.

Yücel, a correspondent for the Die Welt daily, was arrested on February 14, 2017. After spending just a little over a year in prison on terrorism and propaganda charges, his lawyer announced that the reporter had been freed on Friday pending trial. Shortly thereafter, Yücel boarded a plane and returned to Germany.

On the same day as Yücel's release, six defendants, among them three prominent Turkish journalists, were sentenced to life in prison for their alleged role in a coup attempt in Turkey in July 2016.

The government of Turkish President Recep Tayyip Erdogan has used the failed putsch to crack down on tens of thousands of opposition voices, among them many journalists, civil servants and academics. Yücel is far from the only reporter to have been detained for what is believed to be purely political reasons.

Because of this, warned lawmaker Volker Kauder, a confidante of Chancellor Angela Merkel, there is still "a long way to go" in normalizing relations with Turkey.

Speaking with the Rheinische Post newspaper on Saturday, Kauder downplayed the hopes expressed by Roth that Yücel's release could lead to more concessions from Ankara.

"For now, we are only thinking of the other detainees, including Germans, who are still being held under legally questionable circumstances," he said.

In a video released late Friday, Yücel thanked the German government for his release, but said the continued imprisonment of many of his colleagues in Turkey meant that freedom came with a "bitter aftertaste."