Namibia is demanding reparations from Germany for colonial-era genocide that took place more than hundred years ago. Are other former colonies going to follow suit? DW put that question to historian Jürgen Zimmerer. 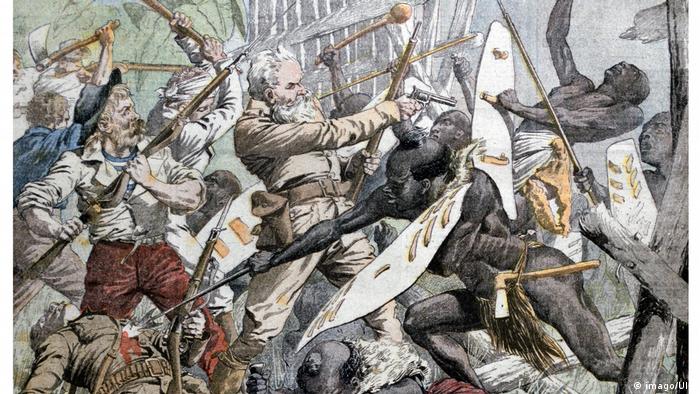 A painting of the Maji-Maji uprising which took place from 1905 to 1907 in then German East-Africa, now Tanzania

DW: Are other former German colonies going to demand reparations from Germany in the future?

Jürgen Zimmerer: That is very difficult to predict, because it depends on a number of factors. Many former colonies closely monitor the negotiations between Germany and Namibia as well as the lawsuit some Herero and Nama representatives have filed against the German government in New York.

The British government has also admitted that it is following developments very closely. It will depend on the circumstances in each individual country if former colonies are going to demand reparations. Namibia is a very specific case.

Why is Namibia a specific case?

First of all because a genocide took place. Secondly it has also a lot to do with Namibia's history after the end of German colonial rule. Namibia was placed under a mandate of the League of Nations and administered by South Africa. It was therefore subjected to the Apartheid system until 1990. Decolonization took place very late.

The former liberation movement SWAPO that fought for independence has been ruling the country since then. This liberation movement is viewed as being dominated by the Ovambo people, while many Hereros and Namas feel left out. They do not feel that their government represents them as far as this issue is concerned.

That's the reason why Hereros and Namas have sued Germany in New York. They are suing for reparations, but also to be included in the negotiations. I do not see such a situation in Cameroon, Tanzania and Togo.

Did Germany commit colonial crimes in Tanzania, Togo or Cameroon that would justify reparations? 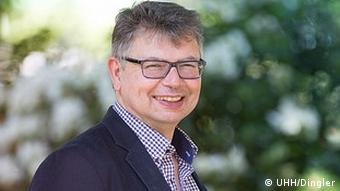 Jürgen Zimmerer is a professor at the University of Hamburg

Massacres did take place. The four former German colonies were brutally conquered. Today one would say: accompanied by war crimes.

The case of Manga Bell in Cameroon is particularly well-known. Manga Bell, who would later become the king of the Douala, had complained about the unjust regime of Governor Jesko von Puttkamer to authorities in Berlin. He was basically advocating for the rights of his people and was executed in August 1914 because of that.

There were misdeeds everywhere that would today be labeled as grave human rights violations. But it remains to be seen if it is possible to demand reparations because of that and if someone is going to demand them.

There was a debate about demanding reparations in Tanzania in February. What do you think of that?

I guess that people in Tanzania are waiting to see how things will develop in Namibia. The negotiations and the lawsuit in New York could set a precedent. Former colonizers as well as the descendants of those who were colonized are watching closely.

Tanzania is an interesting example, because there were no demands for compensation for a long time. They were expressed in February, probably as a reflex reaction to what was going on in Namibia.

Namibia's government also did not demand compensations from Germany for a long time. That changed due to internal pressure after the Hereros and Namas argued successfully that compensations needed to be paid.

I assume that something similar is happening in Tanzania right now. Politicians have decided to address the topic and the question of how to deal with the colonial past is becoming part of the domestic political debate within Tanzania. It is difficult to predict if that will be successful and which politicians are going to take which side.

Is there any debate about the events that went on during colonial rule in the former colonies? Do people know what happened?

Yes, there is. People with an interest in history are certainly aware of the topic. There are also remains of buildings and other places of memory which refer to the colonial era.

But it is unlikely that everybody knows in detail what happened. It's like in Germany: Many people only have a vague idea that Germany was a colonial power. They do not know how brutal German colonialism was.

We have PhD students from Tanzania and Cameroon in our projects in Hamburg. Artists from Namibia are also soon going to join. They are happy that this topic is being dealt with and that they are getting a chance to work on it with us. They tell us that this topic is very important in their home countries, but there are not enough resources for an in-depth exploration of colonial history. That is also an effect of European colonialism: Educational institutions and the chances to explore one's history are still very unequally distributed.

Jürgen Zimmerer is a professor of African history at the University of Hamburg. He's one of Germany's leading specialists in colonial history.

During the genocide in colonial-era Namibia over 100 years ago, the Herero and Nama tribes lost land and cattle. Even today, many descendants are still without land and are demanding compensation. Christian Selz reports. (10.05.2017)

Pressure is growing for Germany to compensate victims of a genocide in colonial-era Namibia. The government in Windhoek wants to sue Berlin but both sides are still set on continuing with ongoing negotiations. (21.03.2017)