During the genocide in colonial-era Namibia over 100 years ago, the Herero and Nama tribes lost land and cattle. Even today, many descendants are still without land and are demanding compensation. Christian Selz reports. 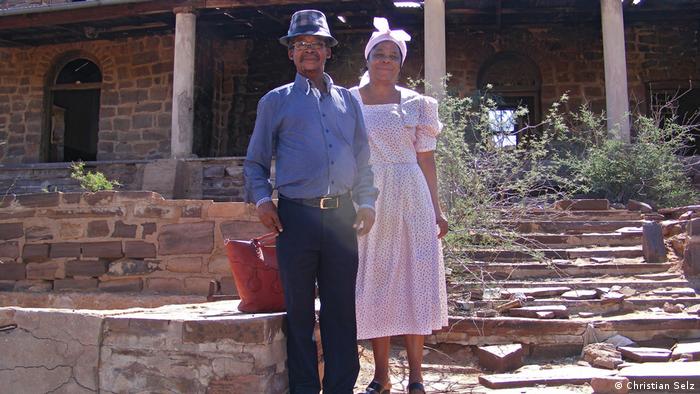 Nama chief Johannes Matroos (pictured above on the left) is standing next to the former missionary church of his home town of Heiraxabis. He's been dealing with a problem that sounds absurd if you think about Namibia's vast lands.

"We are landless because of the genocide," said Matroos, head of the Bondeslwarts Traditional Authority. He's one of the traditional leaders of the Nama. His ancestors lost this land more than 100 years ago.

In 1904, the Nama people - just like the Herero - revolted against German colonial rule and were brutally crushed by imperial German troops. It's estimated that by 1908, more than 75,000 Herero and Nama were killed. Some historians even put the figure at 100,000.

In July 2015, the German government referred to the massacre as genocide for the first time.

By 1906, the war was already over for Matroos and his Bondelswarts clan. On Christmas Day 1906, Catholic missionary Johann Malinowski brokered a peace deal between the Bondelswarts and the German colonial army. The army continued to fight other clans for another two years. 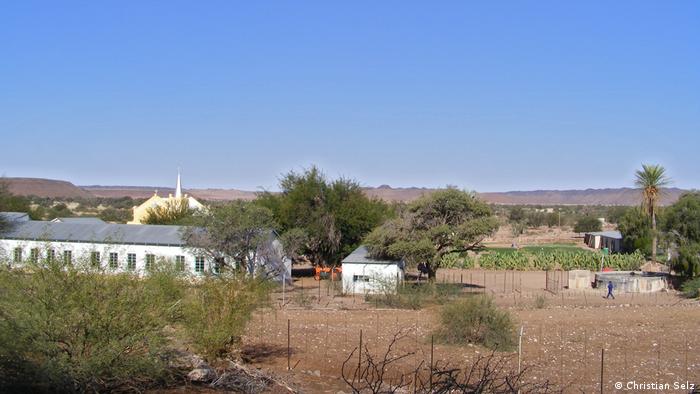 Matroos and his clan have to lease the land that used to belong to their ancestors, since it now belongs to the Catholic Church

"After the peace treaty, we had to hand over our firearms and were removed from here, Heiraxabis, to Warmbad and Heibxabis. That's how we lost our land," Matroos told DW.

Now leasing the land of their ancestors

Even Heiraxabis, where the 64-year-old was born, doesn't belong to his clan anymore. The Catholic Church owns 57,000 hectare  of farmland. The Bondelswarts still lease an 8,000 hectare plot of land. They pay 1,000 Namibian dollars (about 67 euros) per month, Matroos said.

Namibia's government has been trying to buy and distribute land to those who don't own any, but the process has been slow.

"This land issue is still not [being] addressed and we ask now for our ancestral land, but the government only introduced this resettlement program which is not working and not suitable for us, because we did not even get land through this program," he said. 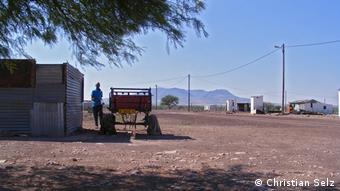 Many Nama still don't own their own patch of land

He wants to buy back land from his ancestors in order to help secure a livelihood for his community. But he lacks the money. That's why he's hoping for reparations from Germany.

Some of the traditional leaders of the Herero and Nama are suing the German government in a court in New York which will take up the issue again in July. It's not clear yet whether the lawsuit will be thrown out.

Namibia's government is also reportedly weighing its options for suing the German government.

"We hope we will succeed in this reparation issue with the government and with the German government, so that we can get land and develop our people," Matroos said.

"Without land you can do nothing. [We need] land, so that we can also send our children to higher education, so that they can equip them for future life and make their own living."

Nama representatives like Salomon David Isaack also want to hold the Namibian government accountable. The 79-year-old is the first adviser and deputy of chief Berseba in the south of the country. He pushes for talks between land owners, the government and landless people - and he hopes for mutual understanding.

"There are some landless citizens who are entitled to land. These people are appealing to the government to bring solutions. But without the participation of all the stakeholders there won't be an amicable solution," he said.

Isaack has dedicated his life to the freedom fight - he's been in exile for a long time. He's happy that his country is now free. But he says there has been little progress when it comes to social reforms.

He also wants Germany to play a bigger role in Namibia's land issues, since the economic backlog of many of the citizens was also caused by land expropriation during colonial times, he said.

Isaack doesn't spell out though what exactly he wants Berlin to do. Just that "they have to take this issue very seriously and become a partner in solving this problem."