Afghanistan: Taliban clamp down on women's taxi use

The Taliban have said women need a hijab — and in some cases a chaperone — to get a taxi ride. Taxi drivers have also been given new moral guidance on how to behave and look. 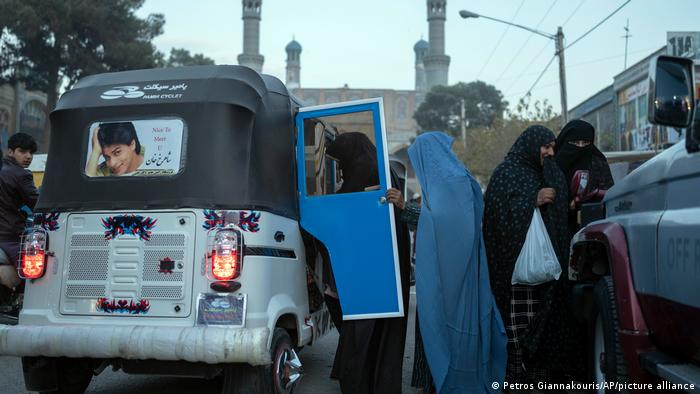 The Taliban have been systematically reducing women's rights since regaining power

Taliban authorities in Afghanistan on Sunday gave new guidance to taxi drivers, advising them against taking fares from women who do not follow a strict Islamic dress code by wearing the hijab, or Islamic headscarf.

The Ministry of Propagation of Virtue and Prevention of Vice also told drivers they should not take women who wish to travel more than 72 kilometers (45 miles) without a male relative as a chaperone.

Ministry spokesman Mohammad Sadiq Akif confirmed the authenticity of the advisory, which was issued in a pamphlet.

The ministry's advisory also urges drivers, presumably male, to grow long beards and break for prayer. In addition, the pamphlet says they should refrain from playing music, which the Taliban deem to be un-Islamic, in their vehicles.

Since seizing power in Afghanistan in August, the Taliban have moved to restrict public spaces and public life for women, as well as girls' education. Women have not been able to return to their jobs for the most part, and most secondary schools for girls have been shuttered.

In some areas, local Taliban leaders have been persuaded to reopen schools for girls, but educational opportunities still remain overwhelmingly cut off for girls and young women.

Protests by women who have demanded rights have been met with violence by the Taliban.

Last week, the Taliban moved to destroy any remnants of images showing women from public advertising after many had preemptively moved to conceal women's faces on ads.

The Ministry of Propagation of Virtue and Prevention of Vice became synonymous with egregious abuses the last time the Taliban ruled Afghanistan in the 1990s.

Criticism of the new rules for women

Haroun Rahimi, a lecturer at an Afghan university, criticized the Taliban's orders. He said taxi drivers were now being called upon to police both women's bodies and their mobility.

He added that the decree created opportunities for harassing women and would make public spaces less secure for them.