Reporter Aliyas Dayee was killed in southern Helmand province when a bomb attached to his car detonated. The Afghan presidency said the attack was "the work of the enemies of freedom of expression and media." 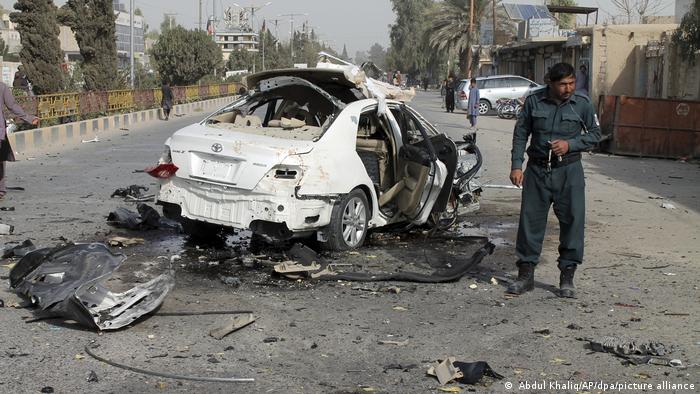 An Afghan journalist working for the US-funded Radio Free Europe/Radio Liberty network was killed in a blast in southern Afghanistan on Thursday, officials said.

Aliyas Dayee, 33, was traveling in Lashkar Gah, the provincial capital of Helmand province, when a "sticky bomb" attached to his car went off, a spokesman for the provincial governor said.

Radio Liberty's chief editor Rateb Noori told the AFP news agency that the journalist had been on his way to the local press club. Three others, including Dayee's brother and a child, were wounded in the explosion.

There was no immediate claim of responsibility for the bombing.

Sediq Sediqqi, a spokesman for President Ashraf Ghani, said on Twitter that "without a doubt, the assassination of Aliyas Dayee is the work of the enemies of freedom of expression and media."

Helmand province has seen intense fighting between the Taliban and government forces in recent weeks. Taliban militants last month launched a broad offensive in a bid to take Lashkar Gah, prompting thousands of people to flee the city. The group has also stepped up its attacks on targets such as rights activists, politicians and journalists.

Read more: How Fatima Gailani wants to make peace with the Taliban

At the same time, government negotiators have been meeting with Taliban representatives in Qatar for talks aimed at ending the decadeslong war in Afghanistan. But progress appears to have stalled.

The talks were part of an agreement Washington negotiated with the Taliban to pave the way for the withdrawal of US troops.

Afghanistan security forces have ended a six-hour battle with gunmen at Kabul University after an attack that targeted many students. The assault took place during already strained peace talks with Taliban militants.

US makes arrest in 2008 kidnapping of journalists in Afghanistan

An Afghan man accused of kidnapping an American journalist and two Afghan civilians in 2008 was arrested and extradited from Ukraine to the United States for trial, US authorities have said.