Afghan President Ashraf Ghani has urged foreign firms to invest in his country, claiming there are huge profits to be made. The appeal comes as both the Taliban and "Islamic State" ramp up attacks. 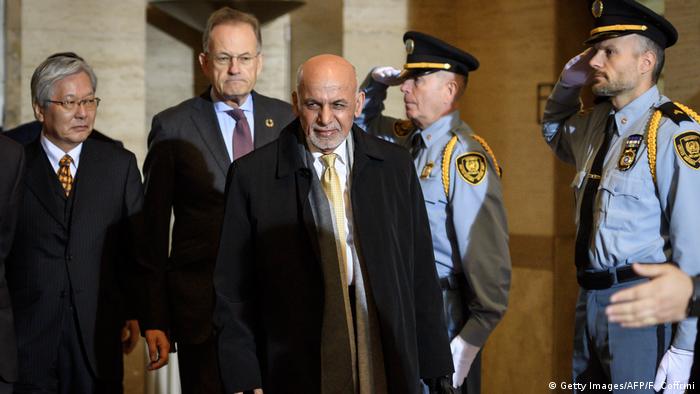 Ashraf Ghani called for greater foreign investment on Tuesday — the opening day of the Geneva Conference on Afghanistan — but steered clear of mentioning the country's grave security problems and food shortages.

"It's a different Afghanistan," the president said. "We are open for business. I hope you are open for partnerships."

The president also touted the country's position at the crossroads joining southern, central and western Asia, saying its location would be "solid gold in the next 50 years."

Looking on the bright side

Ghani largely avoided drawing attention to the country's internal conflicts, mentioning "instability" only once. He was speaking on a day when three US soldiers and a military contractor were killed by a roadside bomb in Afghanistan.

However, the challenges facing the country were addressed by Toby Lanzer, the deputy chief of the UN Assistance Mission in Afghanistan. As well as an upsurge in violence from both Taliban and "Islamic State" militants, 3.6 million Afghans are threatened by hunger that comes on the heels of a drought.

"This is one of the worst moments for the people of Afghanistan, but on many fronts important progress has been made in the last 24 months," said Lanzer.

Since the nominal end of the US-led NATO combat mission in 2014, the Afghan government has struggled to keep control in many areas of the country. NATO troops remain in the country for training and auxiliary purposes to this day.

According to Jawad Nader, another speaker in Geneva on Tuesday, who is head of the British and Irish Agencies Afghanistan Group, the situation in Afghanistan has deteriorated in the last two years.

"Afghanistan is at a breaking point," said Nader.

People from Germany's list of "safe" countries rarely have the right to asylum. DW looks at what the list means with regard to asylum law in Germany and why some view parts of it with skepticism. (12.11.2018)

People have been praying for water since time immemorial. As supplies to the Afghan capital Kabul reach dangerously low levels, the city government hopes religious leaders can help. But not how you may think. (23.10.2018)

Coronavirus digest: Infections soar in US, Europe 2h ago

US judge delays TikTok ban after influencers sue 5h ago