The United States has completed its evacuation mission, allowing the Taliban to take full control of Kabul airport. The departure comes almost exactly 20 years after the US and allied troops invaded Afghanistan. 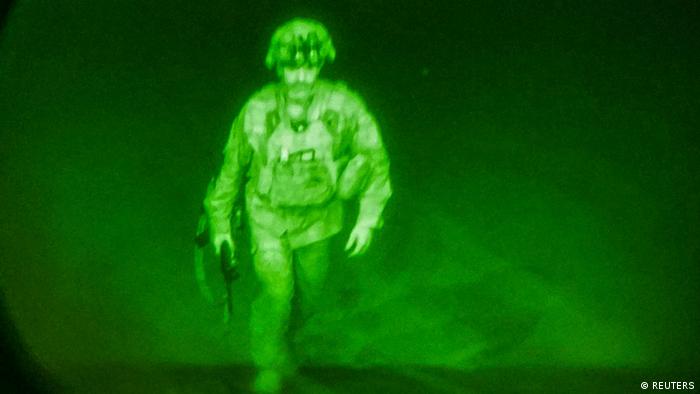 The US military published this photo of the last US soldier to leave Afghanistan, Major General Chris Donahue

It marks the final departure of US troops from the country after almost 20 years of war. The planes took off one minute before midnight in Kabul, carrying the last US troops to leave the country.

"I'm here to announce the completion of our withdrawal from Afghanistan and the end of the military mission to evacuate American citizens," Central Command Commander General Frank McKenzie said.

McKenzie said US and coalition military aircraft had evacuated over 120,000 civilians during a two-week airlift following the Taliban's seizure of power. But he did add: "We did not get everybody out that we wanted to get out."

And US Secretary of State Antony Blinken said later that "under 200, likely closer to 100 Americans wishing to leave remain in Afghanistan after US withdrawal."

The Taliban confirmed it had seized control of the airport in the Afghan capital, and celebratory gunfire could be heard around the city shortly after the confirmation of the US withdrawal.

Earlier this year, US President Joe Biden set a deadline of August 31 for the complete withdrawal of US troops from Afghanistan.

After the final plane had left, Biden issued a statement saying he would explain his decision not to prolong the process.

"Tomorrow afternoon, I will address the American people on my decision not to extend our presence in Afghanistan beyond August 31," he said.

The spiral of events that led to the US invasion of Afghanistan began on September 11, 2001, with the terrorist attacks coordinated by the group al-Qaida.

On October 7 of the same year, the US began airstrikes against al-Qaida and Taliban targets after the latter's refusal to hand over Osama bin Laden, the leader of al-Qaida. Two weeks later, ground forces were deployed.

What ensued was a conflict that spanned two decades and cost nearly 2,500 American lives, among them 13 troops in a suicide bombing by the "Islamic State" extremist group last week outside Kabul airport.

As American and allied troops left in their droves in recent months, the Taliban made sweeping advances across Afghanistan, culminating in their capture of Kabul earlier this month and prompting "the largest airlift in US history, evacuating over 120,000 US citizens, citizens of our allies, and Afghan allies of the United States," Biden said.

The US president praised the US troops' evacuation efforts, saying it was done "with unmatched courage, professionalism, and resolve. Now, our 20 year military presence in Afghanistan has ended."