Afghan security officials have not said what caused the blast near a school in the western section of the capital. Reports are conflicting as to what occurred and no group has yet claimed responsibility. 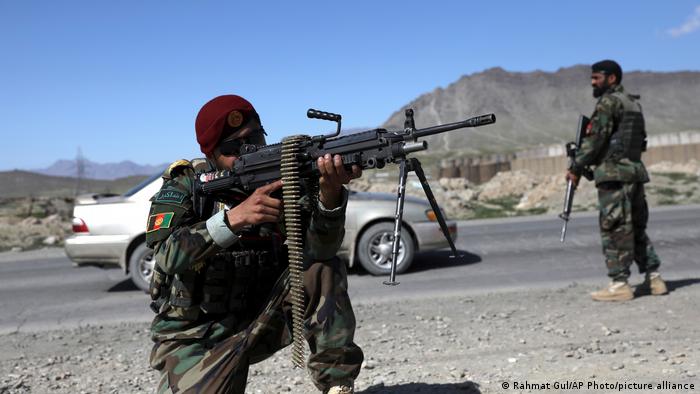 File photo: The dismal security situation in Afghanistan has only gotten worse as Western troops have left and the Taliban reasserts itself

An explosion outside a girls' school in the Dasht-e-Barchi neighborhood of western Kabul on Saturday killed more than 50 people — all of them civilians, with most being young girls between the ages of 11 and 15. The blast left more than 100 people injured.

At least 30 people were initially reported dead, but the number of casualties rose to 50 on Sunday, the ministry said.

Afghan security officials would not comment on the cause of the blast and eyewitness accounts have so far been conflicting, with some suggesting a series of rocket attacks and others a car bomb.

Who was behind the deadly attack?

No one has claimed responsibility for the explosion, but the Afghan government has pointed at the Taliban.

"The Taliban are behind this attack. They have carried out similar attacks on education institutions in the past," Arian said.

The insurgents have denied involvement and condemned the attack.

Taliban spokesman Zabihullah Mujahid told reporters that only the "Islamic State" (IS) could be responsible for such a heinous crime. He also accused Afghanistan's intelligence service of complicity with "IS," though offered no evidence to support the claim.

Afghan President Ashraf Ghani issued a statement condemning the attack. In it, he blamed the Taliban, though he, too, failed to offer proof to back his claim, saying only, "this savage group [the Taliban] does not have the power to confront security forces on the battlefield, and instead targets with brutality and barbarism public facilities and the girls' school."

The jihadist group "Islamic State" maintains an active presence in Afghanistan and has previously attacked minority Shiite areas in western Kabul, specifically targeting women and children. Last year, "IS" claimed to be behind two brutal attacks on education facilities that killed 50 people, most of them students.

Afghanistan: People concerned 'about what will happen'

Last year, the United States blamed the radical Sunni Muslim group — which declared war on Shiites — for a vicious attack on a maternity hospital, though no one claimed responsibility for the attack that killed 25 people, including several pregnant women and newborn babies.

For its part, the Taliban claims that it has not carried out any attacks in the capital since early 2020 when the group's leaders agreed to a deal that eventually led to the US decision to pull its troops out of the country. The group has, however, clashed with government troops outside Kabul.

Afghanistan has seen an uptick in violence since international troops began to depart the country earlier this month after 20 years of war.

The roughly 10,000 US and NATO allied troops still in the country are scheduled to leave by September 11, at the latest, yet attacks by Islamist Taliban fighters have increased of late as they have grown angry over the slow departure of US President Joe Biden's administration — the original deal, signed with the former Trump administration, envisioned a total US troop withdrawal by May 1.

The US invaded Afghanistan in late 2001 in retaliation for the Taliban's hosting of then al-Qaeda leader Osama bin Laden, who is said to have masterminded attacks on New York's World Trade Center and the Pentagon on September 11, 2001.

EU: 'Attack on the future of Afghanistan'

The EU delegation in Afghanistan condemned Saturday's bombing as a "despicable act of terrorism," releasing a Twitter statement that read: "Targeting primarily students in a girls' school, makes this an attack on the future of Afghanistan. On young people determined to improve their country."