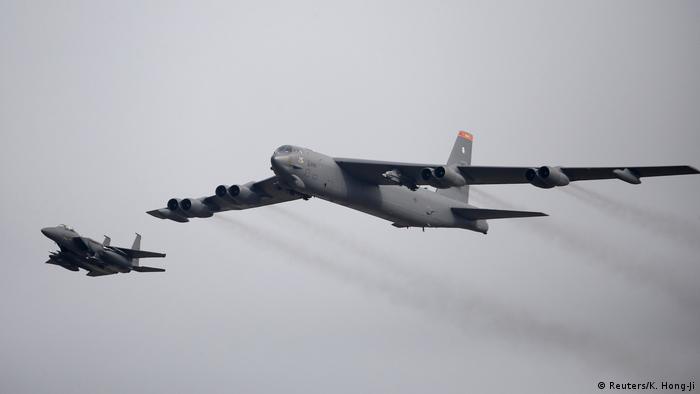 The Department of Defense is deploying more B-52 bombers to Afghanistan to protect troops amid the US-led withdrawal.

The US military is sending additional warplanes to Afghanistan to protect American and NATO coalition forces, the US Department of Defense said Thursday.

President Joe Biden has announced the departure of all American troops from Afghanistan by September 11, with NATO allies also beginning withdrawal operations from the Central Asian nation.

What did the Pentagon say?

Pentagon Joint Chiefs Chairman Mark Milley said during a press conference that six B-52 bombers and 12 F-18 fighters have been ordered to provide air support for departing troops. Milley said "there have been no attacks against US and coalition forces" but noted that Taliban insurgents carry out 80 to 120 attacks every day against Afghan government troops.

Afghanistan: People concerned 'about what will happen'

Milley characterized Afghan security forces as "cohesive" and said the US is looking at options to help Afghan troops maintain security in the country.

"They're fighting for their own country now, so it's not a foregone conclusion, in my professional military estimate that the Taliban automatically wins and Kabul falls, or any of those kinds of dire protections," Milley said of Afghan forces. "That's not a foregone conclusion. There's a significant military capability in the Afghan government. We have to see how this plays out."

Milley said the US military may train Afghan troops in another country. He also said the Pentagon is looking at additional support for the Afghan air force, which is dependent on foreign technicians and contractors who are now leaving the country.

Defense Secretary Lloyd Austin, who was also present at the conference, said the current US drawdown is "going according to plan." At the same time, he said it "will be a challenge" for the Afghan forces to hold off Taliban insurgents after US forces leave.

There are about 2,500 US troops in Afghanistan, but this figure rises to 3,300 if special operation forces are included, the Pentagon said.

Why is the US in Afghanistan?

The US military invaded Afghanistan shortly following the 9/11 terrorist attacks in 2001, which primarily targeted New York City's World Trade Center and the Pentagon building in Virginia. The US believed the Taliban in Afghanistan was sheltering the fundamentalist group al-Qaida, which carried out the attacks.

Other NATO countries also deployed forces to Afghanistan following the US invasion.

The US-led withdrawal has led to controversy, not only regarding the preparedness of the Afghan troops but also regarding the status of women in the conservative country. A report released by the US director of national intelligence said the Taliban would "roll back" Afghan women's rights if they regain power.

US opponents of withdrawal, such as Republican Senate Minority Leader Mitch McConnell, believe removing troops from the region could harm national security interests.

CIA Director William Burns told Congress in April that the US ability "to collect and act on threats will diminish" after the withdrawal.