Particularly threatened by the Taliban, some artists are trying to destroy all proof of their work. Others are creating last pieces as a form of resistance. 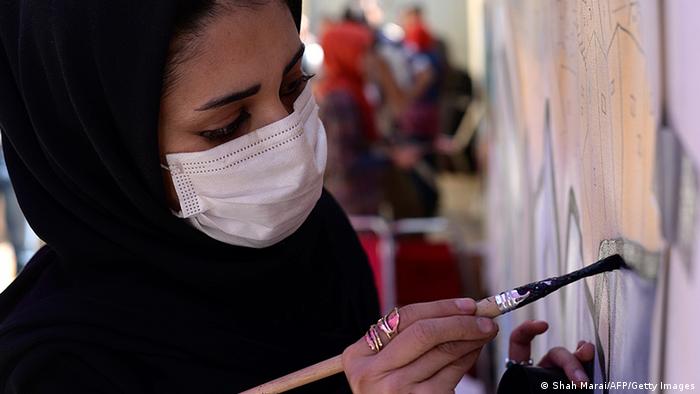 While street art developed in Afghanistan over the past two decades, artists must now go into hiding

"The world powers think they can deal with everything through force, weapons and money, but, before one does anything, one needs to get familiar with the traditions and history of the country," Laila Noor, an Afghan women's activist and fashion designer based in Germany, told DW.

"One needs to be sensitive and ask, what is important for the people of this country? These barbarians do not have anything to do with the arts and culture, but other people in Afghanistan do. It is these people who need support and security and who should not be simply delivered to those who have no respect for the arts, culture or women," she added.

Afghan artists and cultural figures around the world are asking difficult questions, most importantly, making the US and Western countries accountable for the impact of their actions in the country.

Khaled Hosseini, the author of best-selling novels The Kite Runner and A Thousand Splendid Suns, is among the prominent Afghans commenting on the situation on Twitter.

In a written statement to DW, the Kabul-born author expressed sadness as he followed the developments in Kabul, saying he was "deeply disappointed and gravely concerned for the country." Hosseini mentioned the positive results achieved by peacemaking efforts in the past 20 years, but emphasized that the progress made was now being threatened.

"The US and the international community at large must take steps to prevent a humanitarian crisis in Afghanistan. They must exert pressure on the Taliban to respect the essential human rights of Afghans, particularly women and girls, and to refrain from using violence against Afghan citizens," the novelist said.

DW contacted different artists and filmmakers in Afghanistan who said that they had gone into hiding and that they were trying to take their work off the internet and preferred to avoid interviews.

Afghan designer Shamayel Pawthkhameh Shalizi, who lives in Berlin, shared on DW's August 16 Arts and Culture program the testimonies of friends and family who are unable to leaved Afghanistan.

"I'm hearing a lot of panic, fear, resurgence of the PTSD of the people who have lived through Taliban time before," she said. It's perceived by the Afghans as "regression to a time that they never thought would come back again," she added.

"Even though they quote to be 'different' now," Shalizi pointed out, based on the example of the Taliban regime 25 years ago. "It's not a safe place to be an artist right now, both if you continue to create art as well as if you were creating art these 20 years of no Taliban. These are very vulnerable communities, artists specifically and especially the artists who are from even more marginalized communities," such as women and religious minorities.

Shalizi has heard from her musician friends in Afghanistan that they are now breaking down their studios and hiding everything. But she also been in touch with other artists who continue their art as a form of resistance, doing music or graffiti in Kabul as the Taliban take over the city, "as a swan song," the last thing they do before going underground.

Artists depicting the Taliban regime negatively are under extra heightened threat, Shalizi said, but art in general is perceived as a threat by the Taliban.

Filmmaker Sahraa Karimi said as much in an open letter that was widely circulated on social media: "If the Taliban take over, they will ban all art. I and other filmmakers could be next on their hit list.”

The director has meanwhile managed to flee Afghanistan, she wrote in a tweet.

'It's the same Taliban'

The repression has already begun, said Noor, whose organization Afghanistan Women's Network runs several schools in underprivileged areas in Afghanistan. Educational institutions have been closed, and women and girls are staying indoors. Everybody is afraid.

Noor believes that, as under their past regime, the Taliban government will stay quiet for the first six months, when they need international aid, and then begin to stifle rights.

"Twenty years ago, the Taliban shut all schools, girls were forbidden from going to school, women couldn't go to work, they were whipped, they were stoned, they were raped. The world kept watching. It's the same Taliban," she said.

"I don't know what kind of people they are. They kill women and they have been brought into this world by a woman. They have no respect, for their sisters, mothers, and art and culture is anyway a sin. Twenty years ago they destroyed our world heritage in Bamiyan," Noor said.

The international community came to Afghanistan two decades ago, she said. Governments should have found an international solution to the problem, she added, and not run away to leave people in the lurch. "Please understand the disappointment, the pain and the anger that Afghans carry within themselves," she said.