A PC, some accessories and air: that's all it takes to play the aerodrum. The air drum has many advantages: it requires little space, is easy to carry and - perhaps most important - it doesn't disturb the neighbors.

The air guitar is already a famous instrument in many parts of the world; there are even world championships. And air guitars are very popular outside of contests as well - for example, with fans who want to rock with the stars at a concert.

Of course, plenty of humor and a spirit of fun is needed to play the instrument - getting sound out of it is somewhat difficult. Quite on the contrary, however, for the air drum. 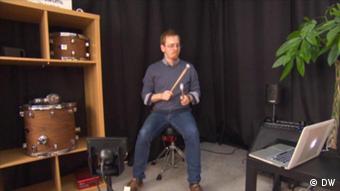 With the drum system developed by Yan Morvan and Richard Lee from Liverpool, a person can actually make music - in the air. All it takes is a pair of special drum sticks, a computer, a special camera, software, two sensors for the feet and, of course, a bit of talent.

This is how the system works: Sensors attached to the drumsticks and the feet are connected to the computer via a special camera. The camera registers the movements of the drummer by the so-called motion capture technique, similar to the video game console Wii, and converts movements to drum sounds using the sound software.

On a computer screen, the drummer is able to see the virtual drums and cymbals, and therefore knows where to hit the drums in the air.

The sounds work like with an E-Drum Set: The drummer can choose his tone - from a small jazz kit with a few instruments to a large rock drum set with a variety of cymbals and drums. Those who want to accompany a song can load that song into the computer program. And the drum session can easily be recorded on a PC. 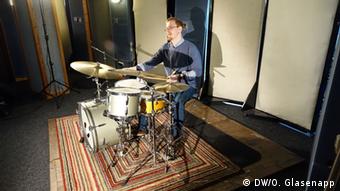 In comparison to a normal drum set - whether acoustic or electronic - the aerodrums are easier to transport, because there are no big bass drums, no cymbal stand, no pedals. A computer and its accessories are everything an aerodrummer needs. A rehearsal room is also no longer necessary. The air drummer can also easily put on headphones, so as not to disturb any neighbors with loud drumming.

More than just a gimmick?

But who are the aero drums intended for? And what is their purpose? The air drums are definitely not meant to introduce newcomers to drums. As a real contact with the instrument is missing, the technique used to play virtually is quite different. Also, as far as creating differentiated sounds is concerned, the lack of contact with material becomes noticeable.

It really depends on the style of music and the event at which the drummer wants to use the drums. With music that contains more electronic sounds or drum machine sounds, aerodrums could well be used.

YouTube already has some videos in which amateur drummers play along with aerodrums to well-known pieces. Even professional drummers can be found on the video platform, uploading videos of their first attempts at air drums. One thing all videos have in common - a lot of fun.

From air guitaring to extreme ironing, there are odd world championships all over the world. Winning isn't always top priority - most of them are all about the thrill. (22.01.2016)

They master the art of surrending to music without an instrument. The world's best air guitarists are competing in Finland - and hoping to change the world, too. (26.08.2015)