Adidas has said it will open fewer shops in Russia than originally intended under plans to expand in one of its main growth market. The move reflects concerns about the Russian economy and its weakening currency. 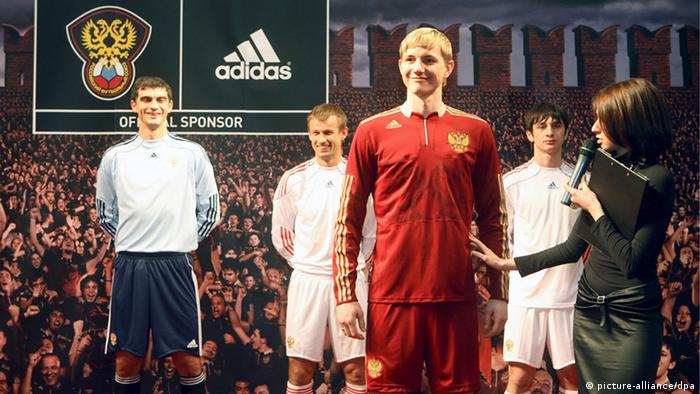 German sportswear and equipment manufacturer Adidas announced Thursday that it would open just 30 new shops in Russia next year. The move underscores a substantial change to the company's expansion in the Russian market, which already in August saw Adidas cut its plans for new stores from 150 to 80 per year.

Adidas blamed reduced spending by Russian consumers amid an economic crisis for the decision. In addition, a dramatic decline in the value of the Russian currency over the past months had eaten into revenues and profits, it said.

Russia has for decades been one of the most important markets for Adidas where it runs about 1,000 stores. Sales and profits had been rising until the Russian economy began struggling earlier this year amid Western sanctions imposed on Moscow over the Ukraine conflict.

The fall of the Russian ruble and other emerging market currencies also contributed strongly to a slump in third-quarter profits, Adidas announced Thursday.

Net profit fell by 11 percent to 282 million euros ($352 million) in the period from July to September, while operating profit even slumped 12.7 percent to 405 million euros. Sales, however, grew by 6.2 percent prompting Chief Executive Herbert Hainer to describe the result as "robust."

"Our group delivered a solid third quarter with accelerated growth rates in many of our key markets and categories," he said.

Hainer also confirmed the company's guidance for the full year 2014, which would include group sales to increase at a "mid- to high-single-digit rate." Net profit was projected to reach around 650 million euros, compared with 839 million euros in 2013.

In 2015, group sales were forecast to increase at a "mid-single-digit rate," and net profit would grow at a "higher rate than group sales," Hainer added.

An international group of investors has shown interest in buying the Reebok brand from German sportswear company Adidas. But it said Reebok's strategic setup would not have to change in the process. (20.10.2014)

More than 100,000 people rallied a day before the opposition's deadline for strongman Alexander Lukashenko to resign. Authorities shut down 12 metro stations and limited mobile internet access to deter protesters.

Attempted hijack of oil tanker off coast of England

Police in Britain are investigating an incident aboard a ship in the English Channel. A Libyan-registered oil tanker was due to dock in Southampton but is now surrounded by an exclusion zone, according to UK media.