Adidas, Nike or Puma: Who will win the World Cup?

On the occasion of the football World Cup in Brazil, sporting goods manufacturers are competing harder for market share and sales. A huge amount of their advertising spending is flowing into Internet campaigns. 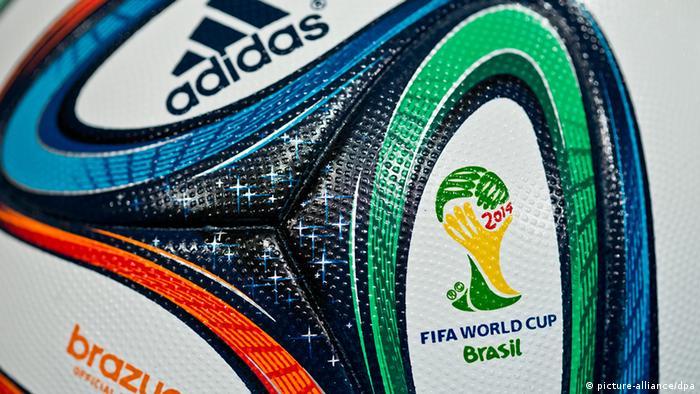 "Now is the time to roll up our sleeves," this saying has been attributed to the German national football player Lukas Podolski. It is true not only for the players taking part in this year's football World Cup in Brazil, but also for the large manufacturers of sporting items.

"Football World Cup is a very important occasion for us and we will use the sporting event to draw worldwide attention, with our products, campaigns, athletes and teams," Adidas spokesperson Lars Mangels told DW.

Big football events such as the current World Cup in Brazil or the European Championships are always good for sporting goods businesses, says Olaf Markhoff, US firm Nike's director of corporate communications for Germany, Austria and Switzerland. "It is even more significant this time around as Nike is both the supplier of sports kits and co-sponsor of the Brazilian team, thus leading to greater publicity for the company."

Nike is the official supplier of sports kits for ten teams participating in the championship such as Brazil, England, Holland and the US, among others. The German company Adidas, at the same time, is supplying nine teams, including Germany, Argentina and Spain.

Furthermore - as the tournament's official sponsor and FIFA's partner - Adidas not only presents the official match ball, but also supplies kits to all referees, ball boys and girls as well as to volunteers.

Another German firm, Puma, has signed contracts with eight teams. The most prominent one is probably Italy. But teams from Africa dominate Puma's list. This has "historical reasons," said Ulf Santjer, director of the company's corporate communications.

"We have been present in the African market for 15 years and mentor around ten teams there," Santjer told DW. Teams from Cameroon, Algeria, Ivory Coast and Ghana have qualified for this year's World Cup.

"The jerseys will be very striking as country-specific circumstances were taken into consideration for designing them," explains Santjer. For instance, the draw of an elephant was incorporated into the jersey of the Ivory Coast.

The companies, however, are not willing to reveal the true costs of their marketing, sponsorship and advertising activities. Only Adidas CEO Herbert Hainer spoke of such expenditure running into tens of millions. Markus Voeth, marketing professor at the University of Hohenheim in Germany, however, is skeptical whether this high spending will lead to any payoff for the firm. 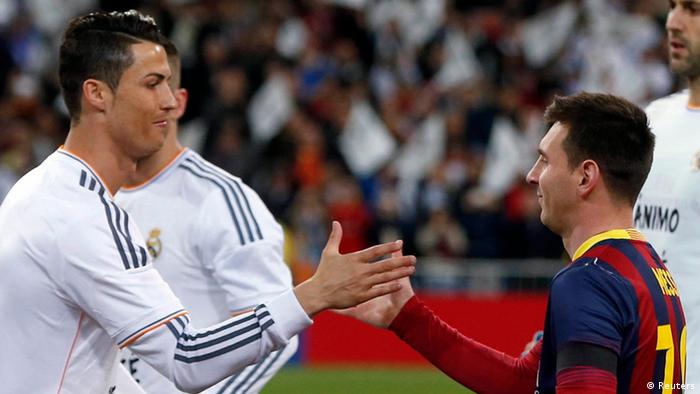 Portugal's Cristiano Ronaldo (left) is sponsored by Nike in the World Cup and Lionel Messi (right) of Argentina is the front man for the Adidas campaign.

"Much of it is done to stand up to each other," says Voeth, explaining that "Nike has posed a strong challenge to Adidas' dominance in football market in recent years, thus prompting Adidas to counter its competitor's attempts with the help of massive expenditure on advertising and marketing at the time of the World Cup."

A huge proportion of this spending flows into Internet campaigns and online advertising. "We spend almost no money for ads in print media," says Adidas' CEO Hainer. Facebook, Twitter, YouTube and Instagram are now a days the battlefields to win over potential customers.

At present, Nike seems to be having the edge. The company's public relations video named "Winner Stays" has been viewed some 80 million times so far, according to the German media outlet "Wirtschaftswoche". In contrast, Adidas' commercial "Messi's Dream" has been watched only 31 million times.

Furthermore, while Nike's advert has been shared more than 1.3 million times so far on social networking sites, the corresponding figure for the best commercial of its competitor was less than 300,000 times, according to media rankings.

Adidas, however, makes Brazuca, which is the official match ball of the 2014 FIFA World Cup. The term 'brazuca' symbolises emotion, pride and goodwill to all. The name was selected in an online vote, with over one million Brazilians voting. Adidas declares proudly that "Brazuca is the first ball with its own Twitter account, where it has been posting its experiences since December."

"Anyone who observes how the two competitors developed their social media activities ahead of the start of the World Cup can imagine what lies ahead of us in the next four weeks in terms of the companies' Internet campaigns," says marketing expert Voeth.

Can old sneakers really be a legitimate investment? Many online resellers and even one of the oldest and biggest auctions houses in the world think so. Recent astronomical prices may prove them right.

A football kit without a club badge? German sportswear manufacturer and Borussia Dortmund sponsor Puma has apologized for a football jersey which has had fans in uproar.