The German parliament has passed a controversial law designed to improve the lives of disabled people. But activists say the law takes the wrong measures and doesn't go far enough when it gets things right. 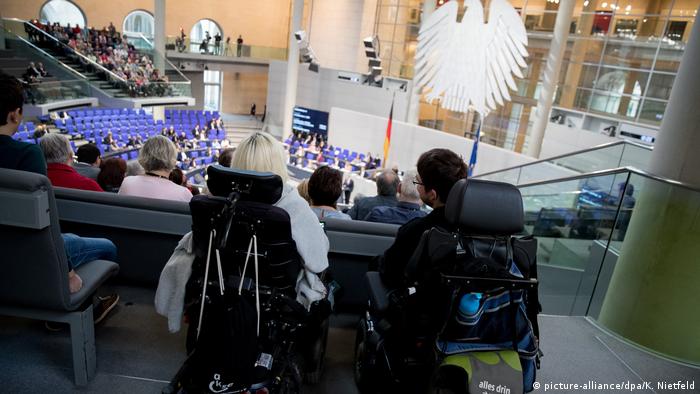 The Bundestag on Thursday passed the long-gestating Bundesteilhabegesetz ("federal participation law") following months of campaigning and debate. Labor Minister Andrea Nahles, whose department conceived the bill, welcomed the new law as a "big, courageous step and nothing less than a system change" as well as part of a "series of important political milestones on the way to an inclusive society."

The opposition Left party, meanwhile, was less than enthusiastic, describing the new law as no more than a "beginning" that failed to live up to Nahles' promise to help people with disabilities to engage in the job market. Too much of the law, said Left party parliamentary leader Dietmar Bartsch, would leave seriously disabled people at risk of "being stuck in a home."

The dream of self-determination

The law could potentially have a major impact: some 10.2 million Germans (more than 10 percent of the population) live with some form of disability, of which 7.5 million are categorized as "seriously disabled." Designed to implement the United Nations' 2008 Convention on the Rights of Persons with Disabilities, the point of the law was to re-organize disability benefits in a way that aids self-determination.

Up until now, the system left many disabled people worse off than those on unemployment benefits. Now, seriously disabled people will be allowed to keep a considerably bigger personal fortune and still be eligible for benefits - 25,000 euros ($26,600), and going up to 50,000 euros by 2020 - and a partner's income will no longer be taken as a factor. Furthermore, the government has also introduced new financial incentives for firms willing to employ people with disabilities. 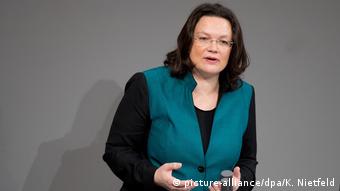 Similarly, disability benefits will be granted regardless of where an individual chooses to live - until now, people with certain disabilities could only receive financial support if they lived in a care home.

Some charities welcomed the new law - notably the large Caritas group, whose president, Peter Neher, welcomed the fact that organizations like his had been consulted. But Ottmar Miles-Paul, spokesman for the "teilhabegesetz.org," was very unhappy, and alleged that after some initial talks, rights groups had been shut out for nine months while the bill was drawn up.

"Even though we fought really hard to get changes to [the first draft of] the law, which was very bad and very dangerous for some disabled people, and had a few successes, the law still gives the administration a chance to put disabled people in institutions," he told DW. "It's nice to talk, but if you talk, it should also have some results."

"The new law still gives the administration the chance to say: you are too expensive and we'd rather you move into an institution," he added. "That has nothing to do with what the UN Convention says."

The law has seen a tortuous, complicated birth, with the government making some 68 alterations during its conception. Pressure groups were able to affect one significant change at the last minute - canceling a plan to cut benefits if disabled people had their lives limited in "only" five of nine areas of life, or fewer - (learning, social interaction, mobility, domestic care, etc). This measure would have directly disadvantaged the sight and hearing impaired. 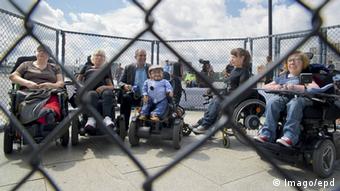 Many disabled people protested against the law throughout the summer

Despite the ministry's declared intentions, Miles-Paul believes that on some points the law actually makes people less independent. "Disabled people have a right to their own assistant - people with disabilities fought very hard for this - now the law gives the chance for local authorities to say: okay, you have to share your personal assistant with your neighbor or someone in your neighborhood," he said. "It often happens like this in group homes: that many disabled people have to go to the same restaurant, movie or theater together."

Equally, under the new law disabled people who do voluntary work have to show that friends and neighbors can't help them before they are entitled to benefits.

Though Miles-Paul admitted that the new law did contain some important improvements - better counseling centers offering advice on rights and how to get into the labor market - he said these measures did not go far enough.

Germany has a fairly good reputation among European countries for the participation of those with disabilities in society - its access regulations, for instance, are fairly advanced. But as Miles-Paul explained, Sweden has been more successful in getting rid of big institutions - disabled people are much more likely to live in their own homes or smaller shared apartments.

"Germany is dominated by this old way of thinking in institutions," he said. "If you go to an administration, they say: this is a problem - oh, we have this institution and the problem is solved. It's much harder to find ways for people to live independently in the community."

While the sports world celebrates the skills of disabled athletes at the Paralympics, the art world is following suit. A traveling exhibition in Germany displays impressive sculptures and paintings by impaired artists. (13.09.2016)

#MapMyDay helps map places with access for the disabled

UN's International Day of Persons with Disabilities is being marked with the start of a social media campaign to share accessibility information online on restaurants, cinemas, public restrooms and more. (03.12.2015)