Aceh bans women from straddling motorcycles | Asia| An in-depth look at news from across the continent | DW | 08.01.2013

Indonesia's northwestern province Aceh has introduced a controversial new law banning women from sitting on motorcycles with their legs apart. Activists are calling for a reversal of the ban. 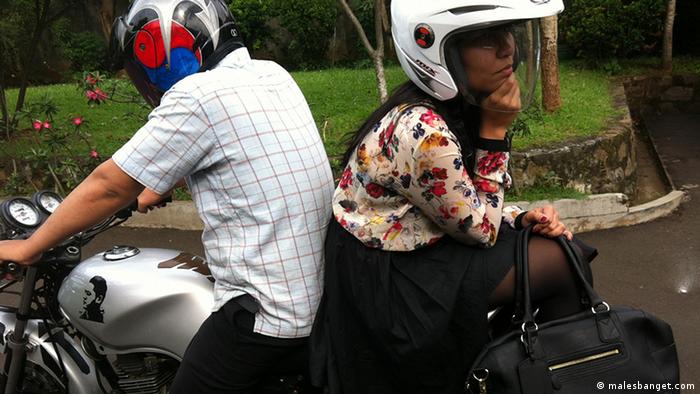 Despite opposition from human rights activist, authorities in Aceh's city administration of Lhokseumawe decided to release a law banning women from straddling motorbikes earlier this week.

"We're going ahead with the ban. There's no resistance here. The criticism did not come from Aceh," Dasni Yuzar, the city secretary of Lhokseumawe, stated in an interview with DW.

Yuzar also said around 50 streamers had already been distributed all over Lhokseumawe, explaining the proper way for women to sit on the back of motorbikes. Almost a week ago leaflets were distributed to government offices and villages to inform residents about the planned bylaw.

Mayor Suaidi Yahya, who had proposed the law, appealed to the public on Monday, January 7, saying it was not meant to discriminate against women, but instead help the implementation of Sharia law in Aceh. 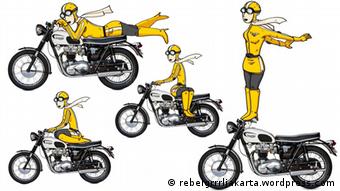 Aceh was the first Indonesian province to introduce a version of Sharia law in 2009. Since then, new bylaws have been released to regulate public morality. Critics say the implementation is discriminatory, only targeting women and youngsters, with restrictive regulations on how they are supposed to dress and act in public.

The "side-saddle" debate started during Mayor Suaidi Yahya's speech at the turn of the year. Suaidi Yahya, a former member of the Free Aceh Movement (GAM), announced the local administration's plan:

"The government is only preserving morals. Women must not straddle motorbikes because it provokes the male drivers," declared Yahya, who has been in office for eight months.

"We are implementing Islamic law here," he said.

However, he also added that women were allowed to straddle motorbikes if they were driving, as long as they were dressed in a "Muslim way."

Azriana Manalu, a rights advocate based in Banda Aceh, is skeptical the new legislation has anything to do with tradition: "Which tradition? This is not about tradition. Our grandparents rode bicycles. So riding sideways on a bicycle wouldn't be an issue. But we can't say the same about motorbikes. This is about the safety of women as passengers."

Al Yasa' Abubakar, a professor at the State Islamic Institute Ar-Raniry in Banda Aceh, told DW that no such prohibition existed in Islam. 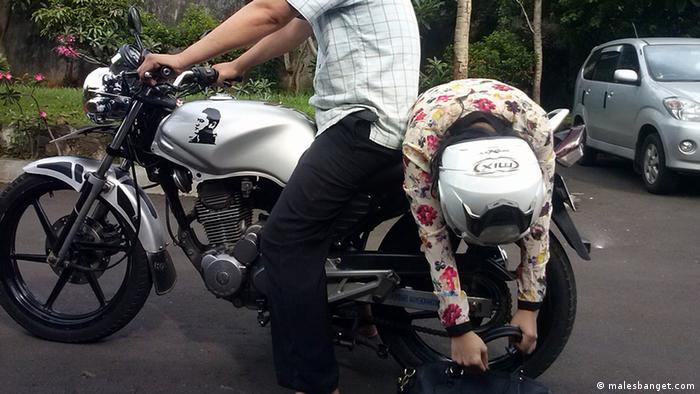 While Yuzar, the Lhokseumawe secretary, agreed it was "not explicitly" written in the Koran that women should not straddle bikes, he said "by sitting astride, women dishonour themselves. They show their body curves almost transparently. They're riding with men who are not related by blood or marriage. Their front body part is in contact with the men's back. This is forbidden in Islam."

Not a matter of history or safety

To some, the law does not reflect Indonesian values - in fact, quite the opposite. "Historically, Cut Nyak Dhien and Laksamana Keumalahayati fought while riding horses. And did they sit side-saddle? To think so is ridiculous," argued Tunggal Prawestri, a women's activist based in Jakarta, referring to two important female role models.

Cut Nyak Dhien is the Indonesian national hero who led guerrilla forces against the Dutch, while Admiral Keumalahayati is the first Indonesian woman ever to hold such a high rank. Both were Acehnese.

"Almost every bylaw that was based on Sharia law targets the female body as a political battle ground in Aceh. Women become the easiest target, because as soon as women rights activists protest we are deemed anti-Muslim or anti-Sharia," according to Tunggal Prawestri.

A similar response came from Evanny Claura Yanti, the Aceh secretary for KPI, the largest women's NGO coalition in Indonesia "Did Aisha sit sideways on a camel?" she asked, referring to Prophet Muhammad's favorite wife. 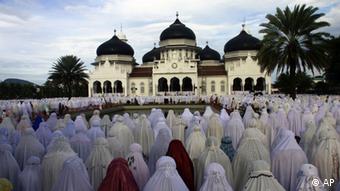 "Politicians in favor of the ban say Acehnese customs are becoming extinct. Is there a study on that? Every law has to be based on studies and facts that support the claim that sitting astride a vehicle is endangering the culture in Aceh."

A look to Malaysia

Yanti further argued, "Malaysia, which also implements Sharia law, actually forbids riding sideways. People get arrested for side-saddling. Why don't we refer to laws such as these - ones which protect women?"

On Saturday, January 5, KPI, the country's largest coalition of women's rights organizations, made an official joint statement in protest of the ban. Dasni Yuzar, the city secretary of Lhokseumawe, said the local administration had received their statement, but that they would not take it into consideration.

"It was taboo for women to hang out at cafes or coffee shops, but that's no longer the case nowadays. We're trying to save the old customs by using the rights given by the central government to the city administration."

Lawmakers announced there would be a three-month grace period. After that, the Sharia police also known as Wilayatul Hisbah will stop female passengers sitting astride motorbikes to give them a warning. Yuzar said he believed this would isolate the "wrong-doers."

This new debate came as the Commission for Missing Persons and Victims of Violence (KontraS) mentioned that the number of incidents of violence as a result of Sharia law in Aceh increased in 2012. The total number of cases of Sharia-linked violence last year totaled 50, up from 47 in 2011.

Long road to peace in Mindanao

Obstacles remain before a peace agreement between the Moro Islamic Liberation Front and the Philippine government can be implemented, says Jasmin Lorch from the German Institute for International and Security Affairs. (09.10.2012)

The Afghan authorities have confirmed that 14 prisoners on death row were executed over days earlier this week. The reason given for the executions: political pressure from the government. (23.11.2012)

More and more women in Pakistan are fed up with gender inequality. They have started to demand more rights. In 2006, a law was passed to improve their situation, but the legislation has yet to be implemented. (26.09.2012)