Abusive chants and Nazi slogans at Germany games - who, what and why? | Sports| German football and major international sports news | DW | 03.09.2017

Abusive chants and Nazi slogans at Germany games - who, what and why?

Germany's victory over the Czech Republic was overshadowed by derogatory chants and Nazi slogans from the stands. What exactly was sung in Prague, by whom and why? DW explains. 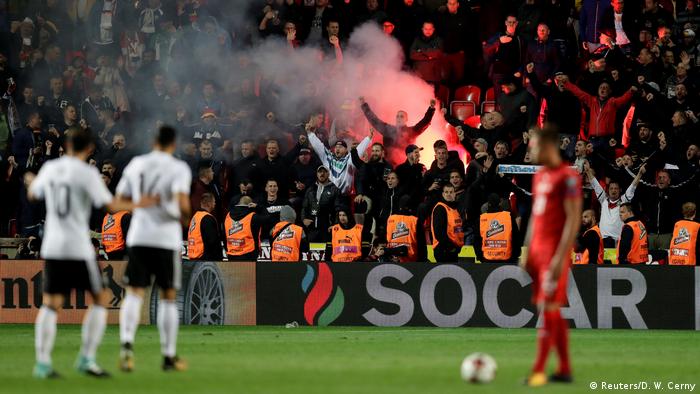 German national team coach Joachim Löw has addressed the unsavory incidents that overshadowed his team’s 2-1 win over the Czech Republic in Prague on Friday.

Traveling German supporters disrupted a minute’s silence, sang derogatory songs about striker Timo Werner and chanted Nazi slogans in the Eden Arena. After the final whistle, the German players refused to approach their fans, instead disappearing straight down the tunnel.

After initially claiming not to have heard the chants in his post-match press conference in Prague on Friday, speaking to reporters in Stuttgart, where Germany play Norway on Monday, Löw explicitly condemned them.

"The team sent exactly the right signal by not applauding the fans," he said. "We don't want these hooligans, they are not our fans."

The incidents in Prague were linked to a number of social and political issues in German football, including perceived over-commercialization and right-wing extremism.

Ahead of kick-off, a minute’s silence for two deceased former Czech players was disrupted by German supporters chanting "Scheiß DFB" – a continuation of current nationwide fan protests against the German football association (DFB). 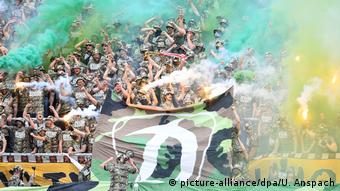 This was the first time that such chants had been heard from fans at a national team game, matches that are rarely attended by ultras who often have little interest in international football.

RasenBallsport Leipzig striker Timo Werner has been the subject of abusive chants from some supporters since diving to win a penalty in a Bundesliga match against Schalke last season.

But Werner wasn't just any striker falling to ground to win a penalty for any team – he dove for RB Leipzig, the Red Bull-backed franchise club considered by many fans to embody the over-commercialization of the sport. For those fans opposed to Red Bull, Werner has become something of a target figure. 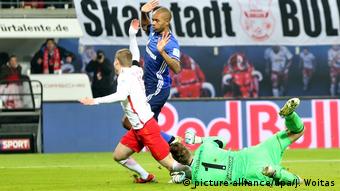 While the chants aimed at the DFB and Werner are rooted in ongoing protests and current sentiment, other chants have caused outrage for a different reason.

The German national team’s traveling support has long contained a small number of right-wing football hooligans and neo-Nazis. Although generally banned from attending domestic matches, they like to use the bigger stage offered by the national team as a platform to air their views.

At the World Cup in France in 1998, French police officer Daniel Nivel was beaten into a coma by German hooligans in Lens. Last summer, a group of right-wing German hooligans traveled to the European championship in France where they attacked Ukrainian fans in Lille and posed with a Reichskriegsflagge – the flag of the Imperial German armed forces until 1921.

On Friday night in Prague, as the final whistle approached, the traditional chants of "Sieg!" (victory) from the German supporters were accompanied by an echoed "heil!" from around 200 neo-Nazis.

Given the geography, Germany’s away matches in eastern Europe are particularly problematic due to the proximity to eastern Germany - where right-wing political parties such as the AfD enjoy significant support and right-wing extremism is more pronounced.

"You know what’s not far from Prague, so you can do the math yourself," Werner said after the match, referring to Saxon cities such as Dresden, Chemnitz and Zwickau which are only 100 kilometers (60 miles) away from the Czech capital. According to Focus, Bild and Mitteldeutscher Rundfunk, the hooligans did indeed belong to groups associated with second-division side Dynamo Dresden and third-division FSV Zwickau.

How did they get tickets?

The 200 hooligans didn’t acquire tickets in the away end and weren't among the 1,200 fans officially ticketed by the DFB. But since the match wasn't sold out, they were able to purchase tickets in the neighboring blocks at the stadium ticket office. Czech media also report that 30-40 hooligans violently forced their way into the stadium.

Both the German national team and Stuttgarter Zeitung have appealed for supporters to refrain from singing derogatory chants in Stuttgart when Germany take on Norway on Monday night  and it appears extremely unlikely that the neo-Nazi clientele from Friday night will re-appear, given the almost sold-out stadium and more thorough ticket checks.

However, local supporters in Stuttgart are just as critical of the DFB as those in other cities and they are unlikely to have prepared a warm welcome for former Stuttgart player Werner. Those chants are likely to continue, regardless of what Joachim Löw thinks.