Although Germany opposed the 2011 NATO intervention that toppled Gadhafi, Berlin is helping with post-war reconstruction. The German government is supporting Libya's development while importing a growing share of oil. 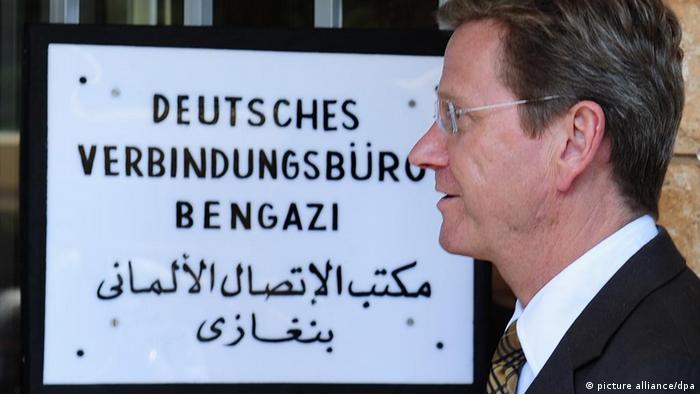 Two years ago, the people of Libya took to the streets to call for political change, initiating a revolution that would end with the death of dictator Moammar Gadhafi. But today, the North African nation is still struggling to chart its future course.

Former rebel groups are still competing for power, and in the east, where the uprising began, there are already secessionist tendencies. The German Foreign Ministry is still warning against travel to Libya. Most recently, Berlin called on German citizens to leave the region around Benghazi.

Chaos also rages in the south, with the government in Tripoli hardly able to control the border. Günter Meyer, professor for economic geography and head of the Center for Research on the Arab World in Mainz, said there are fears that rebels driven out of Mali may now cross the unsecured border into Libya.

The German government, under the auspices of a European Union project, is committed to helping Libya secure its southern border by training security personnel. While the parliamentary elections in July 2012 and the formation of a government in the following October were major democratic milestones, Libyan democracy and stability remain jeopardized by the volatile security situation. 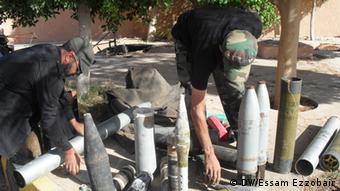 A large number of arms and munitions are circulating in Libya

"Germany participates in projects to support democracy, particularly in cooperation with the EU," Meyer told DW.

Berlin contributes some 4.3 million euros ($5.8 million) in financial support for democratic development in Libya. A commission is currently drafting a new constitution for Libya, and Germany is supporting that project with advisors. By mid-2013, a new parliament and president could be elected on the basis of the new constitution.

As before, a large number of small arms are circulating in Libya. In order to contain the continuing violence, the Foreign Ministry is financially supporting the establishment of the Libyan Mine Action Center (LMAC), which will help secure weapons, munitions, and landmines. After the outbreak of fighting in February 2011, the German government contributed some eight million euros in humanitarian aid to alleviate the suffering of the Libyan people.

Libya not only has to establish a new state - it also has to completely rebuild the entire country. Despite the lifting of sanctions, economic life still has not really normalized.

"We see that trade is indeed possible in Libya," Steffen Behm, the head of the North Africa division of the Association of German Chambers of Commerce and Industry (DIHK), told DW. "But German firms are hesitant to invest, because they know that the legal situation is uncertain." 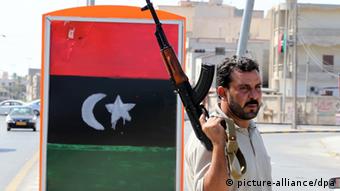 Armed militias compete with the central government for power

Many German companies also have outstanding contracts in Libya that have yet to be paid, Behm said.

In 2012, Germany exported around 650 million euros worth of goods to Libya, according to DIHK. But before the revolution, exports were worth around one billion euros. It's no wonder that there's been a collapse in exports. Libya is interested primarily in German construction machines, but the North African country's building boom has ground to a halt due to the power struggle between militia groups and the transitional government.

Office and apartment buildings lie half finished and larger projects such as the airport expansion in Tripoli are now abandoned construction sites. The preconditions for a healthy business environment are not present, and the transitional government is unwilling to make decisions until legitimacy has been established through elections.

But even if the financing was there and the rule of law was strong, Libya would still lack - due to the security situation - the workers and experts it needs to finish these projects. Visas are essentially not being issued at the moment. Yet the German construction industry remains very interested in Libya, according to Behm. Companies are hoping to receive contracts as soon as the new government is in power. 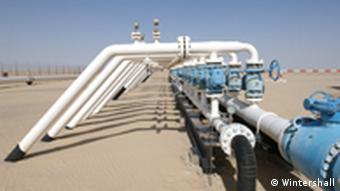 Libya has managed to get its oil production up to prewar levels, and that's benefiting Germany.

"It is confirmation that Libya remains an important import partner for us," said Behm. He added that he cannot confirm whether or not Germany is being economically disadvantaged due to its refusal to participate in the 2011 NATO intervention in Libya.

The revolutions in Libya, Tunisia and Egypt have impacted on the entire Arab region. German entrepreneurs initially hoped for a wealth of new opportunities, yet such lofty expectations are now giving way to skepticism. (22.01.2013)

Libya one year after Gadhafi's death

Moammar Gadhafi controlled all aspects of public life in Libya for 40 years. One year after his bloody demise, Libya is trying to build a new state. (20.10.2012)