A fatal gang rape in New Delhi put the spotlight on the situation of women in India, prompting stricter laws on sexual violence. But a year later, much still needs to be done to make women feel safe, experts say. 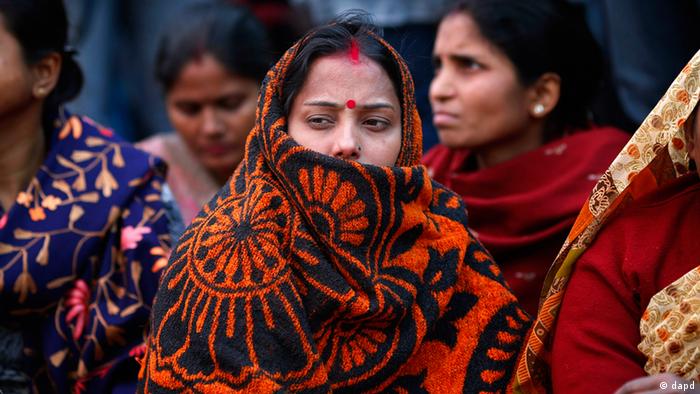 On December 16, 2012, a brutal crime sent shock waves across India. According to police reports, a 23-year-old female physiotherapy student and her male companion were coaxed by six men into boarding an off-duty bus they thought would take them home after watching a movie at a shopping mall in New Delhi. The men savagely beat the man and repeatedly raped the woman, inflicting massive internal injuries with an iron rod. The victims were then dumped naked on the roadside. The woman died of injuries two weeks later in a Singapore hospital.

Although government statistics show a woman is raped every 20 minutes in India, the brutality of the December attack became the tipping point that brought the issue of violence against women into the limelight, not only in India, but globally. The incident triggered outrage and a debate over women's safety across the South Asian nation, prompting the country's parliament to pass stricter laws on sexual violence, including a minimum 20-year prison sentence for rape and, in the event the victim dies, the death penalty.

In addition to this, the definition of rape was expanded to include penetration by objects or any body part. "Sexual abuse in all its forms including sexual harassment, stalking and voyeurism was made illegal," India's additional solicitor general, Indira Jaising, told DW. 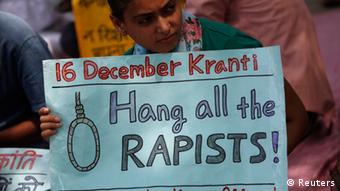 Moreover, fast-track courts were established to speed up trials in sexual assault cases which earlier took years to conclude. Some ten months after the crime, such a court found four of the adult suspects guilty on all counts and sentenced the men to death by hanging.

The ruling was handed down only a few days after another suspect was also found guilty. But unlike the four adults, the teenager defendant was sentenced to only three years in a correctional facility - the maximum penalty allowed for a juvenile offender under Indian law.

The fact that the teenager was tried in a juvenile court sparked protests and heated discussions across the country on a possible reduction of the legal age of a juvenile. Only five of the six alleged attackers faced legal proceedings because the reported ringleader and regular driver of the bus died in jail in an apparent suicide.

Experts point out that the widespread media coverage of the case has also led to an increased awareness of the issue of violence against women in Indian society. "Women have been forthcoming in reporting crimes against them. They have been empowered by law and the response of civil society," said Jaising.

This view is shared by K. T. S. Tulsi, a senior lawyer practicing in the Supreme Court of India. According to the lawyer, the social stigma associated with rape is getting reduced. "Girls are becoming more assertive and they are open to complaining. They don't feel that the society is going to stigmatize them," Tulsi told DW.

After the fatal gang rape in New Delhi last December, a juvenile court has delivered a guilty verdict on one of the suspects on trial. Rights activist Ranjana Kumari examines how the case has affected Indian society. (31.08.2013)

Pace of gang rape trial has been 'remarkable'

After a fatal gang rape last December, India set up fast-track courts to speed up trials of sex offenders. Ahead of the first sentencing in the case, lawyer Pinky Anand examines the effectiveness of these courts. (26.08.2013)

This development is supported by the latest government figures. According to local media reports, 1,330 cases of rape were reported to police in New Delhi this year until October, against 706 cases for the whole of 2012.

The fatal gang rape case has had such a big impact on Indian society that even the country's film industry decided to reflect its views on the issue. The Bollywood thriller "Kill the Rapist?," set to be released this month, aims to embolden Indian women to report the crime, but also to make "every rapist shiver with fear before even thinking of rape," according to the film's Facebook page.

Despite the increased attention on women's issues, activists say crimes against women are on the rise. In the latest high profile case, police arrested the editor-in-chief of India's leading investigative magazine, Tehelka, late November after a female colleague accused him of sexually assaulting her. The investigation into Tarun Tejpal - who denies the accusations - has dominated headlines in India for days, followed by similar accusations by an intern against a retired Supreme Court judge.

However, experts say that a lot still needs to be done to make women feel safe in the country, as there has been little progress made in addressing the attitudes that legitimize violence and discrimination against women. "Rape cultures are nourished by norms, attitudes, and practices that trivialize, tolerate, or even condone violence against women,” Indian human rights activist Ranjana Kumari explains.

According to a 2012 report by UNICEF, 57 percent of Indian boys and 53 percent of girls between the ages of 15 and 19 think wife-beating is justified.

Kumari, who also heads the New Delhi-based Centre for Social Research (CSR), believes that the only way to prevent these crimes is to educate the masses, especially men, on the issues of violence, gender stereotyping, and the pervasive and negative impact of patriarchy. 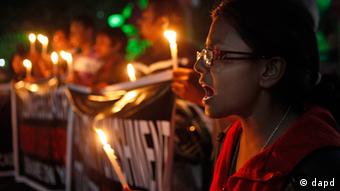 “The subject of gender sensitization must be introduced from the grass root level in schools, colleges and the workplace. We need to educate men and women on women's rights under the law and work with communities to develop a gender sensitive society that is underpinned by respect and equality,” the rights activist said.

This view is supported by Kaimini Jaiswal, a legal expert and lawyer at India's Supreme Court, who believes that in order to bring about real change, it is imperative to empower all women, most of whom are still financially and emotionally dependent on their male relatives. "What we see in the bigger cities and metros is not the true picture. Women can barely raise their head and voice in most households. This needs do be dealt with literacy because most women don't even know their rights."