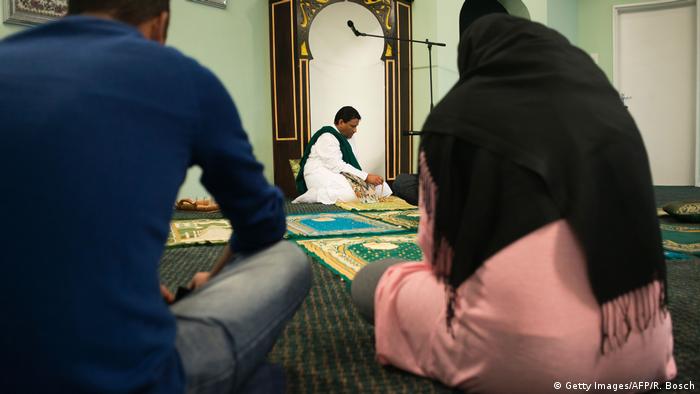 Imam Hendricks, seen here in the background, not only allows but encourages men and women to mix during prayers

Gay men and lesbians continue to suffer persecution in most formally Muslim countries - eight of which even treat homosexual acts as crimes that are punishable by death.

Muhsin Hendricks, a South African imam who fights for recognition for gay men and lesbians, believes that it doesn't have to be this way. He has built up a small, loyal congregation in Cape Town called the Inner Circle, in which he helps queer-identified Muslims reconcile their sexuality with their religion. Active for 20 years now and headquartered in Cape Town's southern suburb of Wynberg, the Inner Circle is not limited to gay men and lesbians. 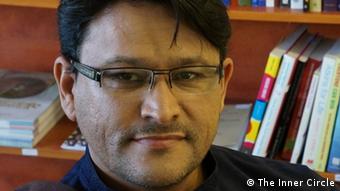 "I learned that homosexuality is just the first avenue to address a lot of other injustice committed in the name of Islam," Hendricks told DW. "You'd be amazed at the amount of straight people that are attracted to our organization.

"I realized that I'd taken on something big. I've taken on the patriarchy that sits behind Islam. It's not easy, and it requires a good amount of faith to do that work. But, thankfully, I am in the business of faith."

Hendricks lends support to gay Muslims who have been exposed to intolerance from more-orthodox Islamic leaders in their communities. He experienced this firsthand, having grown up under the teachings of his grandfather, who also was an imam.

"I grew up hearing my grandfather preaching from the pulpit that gay people would go to hell," Hendricks said. "So, I thought there was no place of expression for sexuality in my life. The community tells you you should just get married and then it will all go away. And so I got married. But it didn't even take us a year to realize that we had made a big mistake."

Hendricks had two children with his wife, but then divorced her to seek a more honest life: "I needed to let the world know that I was an imam, but that I was also gay. Some Muslims may want to live like this still is seventh-century Arabia, but it's not. If I can't be part of their Islam, so be it."

Using his homosexuality as a conduit for dialogue, Hendricks views himself as a part of a growing movement aimed at changing global perceptions of Islam. But first he has to convince fellow Muslims that he is not a wayward imam. 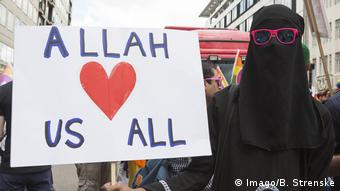 Gay and lesbian Muslims have become increasingly outspoken in recent years, but can they do enough to spark a reform within Islam?

"I want to ... arrive at a point where we can include queer people," Hendricks recently told the Agence France Presse (AFP) news agency. "I don't see the Muslim community as the enemy."

"Even the prophet himself had men working for him in his household who had no interest in women whatsoever," Hendricks said. "If the prophet can have a gay servant, it means that he gives his blessing to that sexuality," he added.

Hendricks, who has received death threats from people offended by his work, said his organization occupied a niche that occasionally even attracts unexpected praise from other Muslim communities.

"Sometimes they feel that I should be thrown from the highest mountain, and sometimes they appreciate that there is one imam who is willing to work with people who they are unwilling to work with," Hendricks told AFP. "This is who I am, and if that means I am going to be killed because of my authenticity, then that is how I choose to meet God." 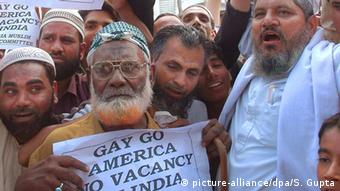 There are 300,000 Muslims living in Cape Town, the majority of whom are Cape Malays, mixed-race descendants of people brought to the Cape of Good Hope from present-day Indonesia in the 17th century, typically as slaves. Cape Malays experienced widespread poverty under apartheid rule, albeit to a lesser extent than South Africa's majority black population did.

South Africa's 1996 constitution established nominal equality for all its citizens, including then-revolutionary protections for homosexuals; to this day, it remains the only country in Africa that allows same-sex marriages. But many Muslim South Africans disagree with the extension of equal rights to gay men and lesbians.

One of those is  Imam Yusuf Pandy, who leads a congregation in Mowbray, a busy district near central Cape Town, about 10 kilometers (6 miles) north of the Inner Circle's offices.

"Homosexuality is unacceptable, and the punishment will be the fire," Pandy told AFP. "How can you be homosexual? It is forbidden. And it is your duty as an imam or as a Muslim to go and speak to them and say: 'No, it cannot be.'"

Change is in the air, however. Literally down the street from the community center and mosque run by Imam Hendricks, another mosque opened its doors two years ago, also welcoming queer Muslims. The Open Mosque, which was started by the British scholar Taj Hargey in 2014, brings Muslims from different walks of life together. Much like at the mosque run by Hendricks, men and women worship together, and homosexuals are welcome and integrated into the congregation.

Inside Europe: Islam and homosexuality in France

"There obviously is a demand for this kind of thing around here," Hendricks jokes.

Nusaybah Deaves*, a personal trainer and performing artist based in Cape Town, also believes that there needs to be more dialogue about homosexuality in Islam. She told DW that prevailing attitudes toward homosexuality within Islam meant that "some Muslims felt that they couldn't be accepted in their communities and families because of their sexuality."

"So, in some instances, they turn to drugs, violence and unhealthy lifestyles because they couldn't feel complete," Deaves said. "I have a very dear friend who descended into drug addiction because of this. That's why I believe in Muslim communities this needs to be discussed more openly."

Deaves said she had a number of homosexual Muslim friends and that most Muslims in Cape Town have inclusive attitudes toward gay men and lesbians. "Islam is based on mercy and compassion," she said. "Every subject has to be looked at through that viewfinder. So, when it comes to homosexuality, I don't believe in using the word 'sin.'"

"Islam also believes in returning to your 'fitra' - you natural state of being," Deaves said. "So, I don't believe that you choose to be homosexual: It is your natural state."

*name changed as per request