War-ravaged Afghanistan is expected to hold parliamentary elections this October but recent attacks on voter registration centers suggest that the elections could exact a higher toll than previously expected. 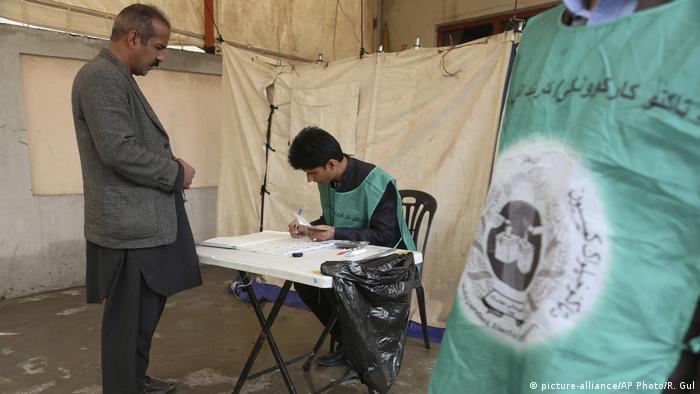 A suicide bomber targeted a voter registration center in a Shiite-dominated neighborhood in the west of Kabul, the Afghan capital, on April 22, leaving more than 50 people dead and around 120 wounded. The victims included women and children who were queuing to receive their voter identity cards ahead of the country's long-delayed parliamentary elections.

Kabul resident Nazifa — who goes by one name like many other Afghans — was unharmed in Sunday's attack, but four members of her family were among the wounded. "What is our fault? Why are we being targeted? We just want to study and have a safe country," she told DW.

Officials are therefore working toward registering 14 million voters and issuing around 10 million new identity cards by autumn. However, according to a member of the IEC, just over 291,000 people have reportedly been registered since the process began just over a week ago.

Experts warn that polling could be severely hindered by the Taliban and other insurgent groups that oppose the vote. These outfits targeted previous Afghan elections, but the upcoming elections could prove to be deadlier as anti-government insurgents have increased their clout in Afghanistan.

According to recent data released by the US government, "56 percent of the country's 407 districts are under Afghan government control, 30 percent are contested and 14 percent are under insurgent control." Now, Afghan security forces have also had to contend with the self-proclaimed "Islamic State" (IS) terror group that claimed responsibility for the attack in Kabul.

While IS does not control vast swathes of territory in the country, it is still capable of carrying out coordinated attacks in cities like Kabul, which could result in heavy casualties among people registering for vote.

Why Central Asian states want peace with the Taliban

Pashtuns rise up against war, Taliban and Pakistani military

The Free and Fair Election Forum of Afghanistan (FEFA), which observes elections in the South Asian country, has warned that such security incidents could dramatically affect voter turnout. "What happened in Kabul and the attacks before that on polling centers in Ghor, Badghis, Baghlan and Nangarhar will dishearten Afghans and reduce turnout in the elections," Yusuf Rashid of FEFA told DW.

There are even deeper concerns about voter registration in the Afghan districts where the registration process has yet to start. The IEC is currently focusing on cities, which have already proven to be a challenge for the electoral body. The next step would be to move to the districts.

The IEC admits that over 900 voting centers are located in areas under Taliban control where, according to IEC officials, no votes will be cast. Furthermore, 3,000 other voting centers are facing security threats. Some observers, however, estimate these numbers to be much higher.

A case of voter fatigue

Voter registration was alarmingly low even before Sunday's attack. The 2014 presidential elections — which pushed the country to the brink of another civil war as both top candidates claimed victory — previously harmed voter confidence in the conflict-stricken country.

"There is no interest in the elections. People will not vote because they do not trust the process," Kabul resident Ali Zafar told DW.

The last presidential elections in Afghanistan were also accompanied by allegations of widespread fraud, vote rigging and major irregularities, so much so that the IEC failed to determine the number of votes each candidate won in the runoff elections for weeks. The Afghan election saga only ended after the then US Secretary of State, John Kerry, visited Kabul and crafted a power-sharing deal between the two rivals for the Afghan presidency, Ashraf Ghani and Abdullah Abdullah.

All these incidents have led many Afghans to believe that their votes do not matter, which experts say could be another major reason for low voter registration numbers. "What did other elections give us? There is no trust in this process," Nazifa said.

However, IEC Chairman Abdul Badi Sayathas assured that his office will do all in its power to restore trust in the elections.

But as security threats continue, experts warn that distrust in the system and fear for their lives could hinder many Afghans from exercising their basic democratic right.