70 years of currywurst: The evolution of snack bar culture in Germany | Culture| Arts, music and lifestyle reporting from Germany | DW | 04.09.2019

70 years of currywurst: The evolution of snack bar culture in Germany

Everyone in Germany is familiar with it: the greasy sausage stand on the main shopping strip where you think twice about actually picking up a snack. The selection is limited anyway: bratwurst, currywurst and french fries. And only mustard, ketchup or mayonnaise to go along with it.

The classic "imbiss" was ubiquitous in Germany for decades, but, just like the classic "kneipe," or corner pub, the snack bars are slowly dying out. They're being replaced by modern, bright eateries with flair that offer a "burger of the week" with grilled antipasti vegetables, basil pesto, hazelnut mayo and grilled scamorza cheese. Truffle-Parmesan french fries are served with it.

But the journey from sausage to vegetable burger has been an odyssey.

From medieval carts to 'rubble' stalls

The snack is nothing new. Mobile snack stalls came about in the Middle Ages in Germany, with food offered for sale from carts at markets. But on days where the outdoor markets were closed, getting food on the go was by no means the norm.

"Since Germany, like all of Central Europe, was a society of scarcity for centuries, there was only just enough to eat," Gunther Hirschfelder, cultural anthropologist at the University of Regensburg, told DW. This resulted in a fixed meal schedule. Food was eaten according to fixed rules, at fixed times and at home. "It was considered indecent to trot through the countryside and munch on something."

Read more: Berlin 24/7: What's the currywurst cult all about?

This rigid system only relaxed in Germany after the Second World War. During reconstruction, a new form of out-of-home consumption was created in the ruins of German cities: the so-called "rubble stalls."

In Cologne, for example, there was the "Puszta Hütte" in the late 1940s, where goulash was served from pots. Eating outside of the home was still generally frowned upon, but the foundation was laid for a change in habits.

In Berlin, the currywurst first appeared on September 4, 1949, when Herta Heuwer invented the recipe of fried sausages, made of pork and beef, served with ketchup and spiced with curry powder.

US soldiers were simultaneously setting a new standard in the country. Not only had they brought along with them their casual manner, their chewing gum and their chocolate, but also their own food culture. Germans were becoming more familiar with eating on the road from the "diners" depicted in the US films of the time as well.

Mass motorization and the snack boom

Another stone for modern German snack culture was laid in the mining towns of the Ruhr area as early as the 19th century. Clean mineral water was offered in so-called "drinking halls" because normal drinking water was unpalatable. Later, coffee, tea and magazines were added to the selection. After the war, workers would stop as such places for a cigarette and a beer on their way to or from work. Soon, sandwiches were on offer to go along with it.

The actual triumph of the snack bars finally began in the 1960s with the economic upswing. Meat consumption became the norm, and the trend toward french fries was spreading from England and the Netherlands to Germany. The demand for a quick snack too grew dramatically.

The mass motorization and new desire to travel that accompanied the postwar "economic miracle" in Germany were doing their bit as well. Guest workers from Italy, Greece and Turkey opened their first fast food restaurants and stalls in large German cities and industrial centers.

The bratwurst soon faced competition from pizza and gyros, later from the popular döner kebab. In 1971, the first German McDonald's restaurant opened in Munich. Fast food culture was at its peak in the 1970s and 80s, a time when speed of service subsumed flavor, and sustainability.

Read more: Record for biggest kebab in the world set in Berlin 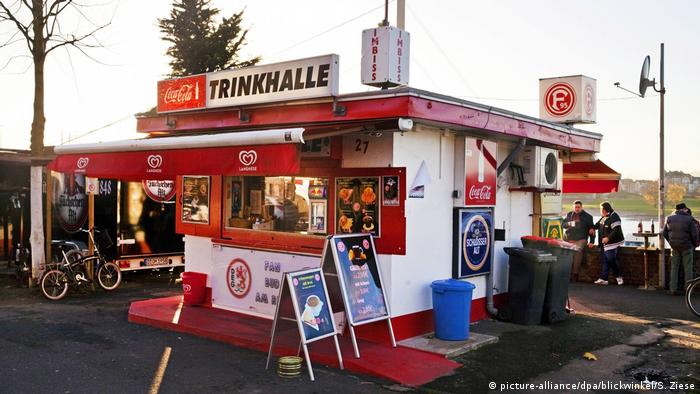 At the turn of the millennium, snack culture changed noticeably. Classic greasy and salty fast food was considered unhealthy and got a bad rap. A demand for vegetarian and vegan food grew and the stalls and snack bars adapted, with a lot more falafel or tofu on the menu.

Nowadays snacks run the gamut of classic bratwurst at the soccer stadium stall, to vegan Indian food at a music festival, to insect burgers from the food truck.

"In our lifestyle society, one's individual lifestyle is expressed in their nutritional style," said Gunther Hirschfelder. In his opinion, the "permanent snacking" and eating out trend will continue due to new forms of mobility and the growing number of single households.

But he adds that the trend is moving away from exoticism and toward an "apolitical re-nationalization" and regionalization of German snack bar culture. Pretzels from the local bakery are cool again, as are french fries, though cooked in clean, saturated fat-free oil. Though food trends are fickle, snacks have found a permanent place in a fast-evolving culinary culture.

Venezuelan Sharon Schael spent years as a DJ before she swapped the decks for a fry pan and started to sell traditional arepa street snacks — cornbread pockets filled with meat or beans — in her Berlin food truck. (16.05.2019)

Vegan currywurst, Italian dishes made with regional products only and many different kinds of kebabs. Berlin's new trends when it comes to food might set the course for the future of German traditional cuisine. (14.11.2017)

It was a long journey from currywurst to insect burger: in Germany, snack culture has changed drastically. Fusion food trucks have become common place in a nation where both sausage and tofu snacks share sidewalks. (08.07.2019)