Germans love a good sausage, particularly if it's covered in a reddish sauce and served with crinkle-cut chips. And that's the way it's been for more than a quarter of a century, according to a new study. 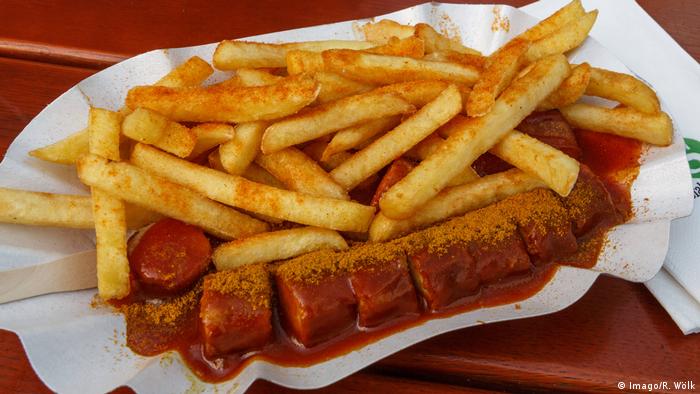 "Currywurst" — a long and thick sausage covered in a reddish sauce and sprinkled with curry pepper — is still adored by cafeteria patrons across Germany, according to a new study.

Apetito, a catering company from the western German state of North-Rhine Westphalia, published the 2017 edition of its annual analysis of meal popularity in different cafeterias.

Currywurst with chips — crinkle-cut chips to be exact — defended its number one spot for the 26th year in a row. The traditional schnitzel with fried potatoes took second place, and spaghetti bolognese maintained its third spot from last year.

Read more: Berlin 24/7: What's the currywurst cult all about?

But there were variances among patrons at different types of cantinas.

Children at schools and kindergartens favored tomato soup with rice and meat balls the most, followed by vegetarian ravioli and vegetarian lentil soup. "Kids and teenagers like variety," Apetito said.

The cult of the currywurst

The elderly were, by contrast, far more conservative.

Geriatric lips were most eager for beef roulade with boiled potatoes and red cabbage, while meatloaf with parsley potatoes and sauerkraut was a new entry in second place, pushing green bean stew with beef to third.

Read more: The cult of the currywurst

But Susanne Leitzen, an expert from the German Nutritional Association (DGE), warned people against consuming these types of rich meals for lunch.

People could be healthier by eating a meal consisting mostly of vegetables and complex carbohydrates, she said.

According to the DGE, two-thirds of men and half of women in Germany are overweight, while a quarter of adults are seriously overweight.

Read more: What Germans eat in the summer