The caravan of migrants hope to reach the United States. US officials warned, however, that the trip there would be "more difficult than ever." 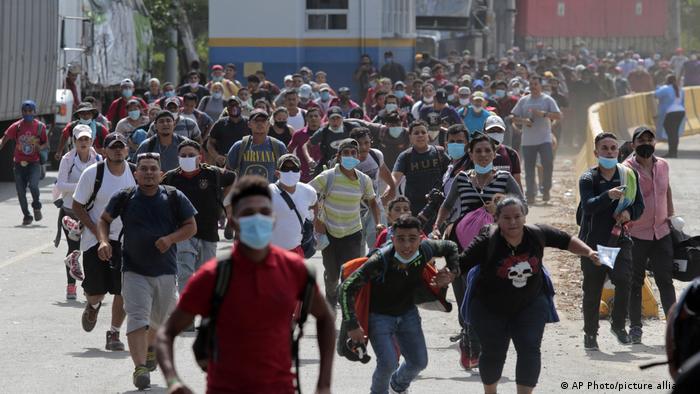 About 2,000 Honduran migrants hoping to reach the United States crossed into Guatemala on Thursday, testing the newly reopened crossing that had been shut by the coronavirus pandemic.

The migrants set off, mostly on foot, from San Pedro Sula in northern Honduras on Wednesday, according to media reports.

"My goal is to find a good job," one of the migrants, a man traveling with his wife and daughter, told the news program Hoy Mismo. "This is a tough road, but every sacrifice has a reward."

The caravan of migrants heading towards Mexico on the way to the United States was the first since Guatemala reopened its borders two weeks ago, following a closure to prevent the spread of COVID-19.

Authorities had planned to register the migrants as they crossed and offer assistance to those willing to turn back, but the group crossed the official border without registering, according to Guatemalan immigration authorities. Officials did not make any attempt to stop them.

‘More difficult than ever to cross'

US officials also issued warnings that the journey would be more difficult than in the past.

"Today more than ever, it is more difficult to cross the US border illegally," the US embassy in Honduras said on Twitter. "The voyage has become even more dangerous, given the current global Covid-19 pandemic."

Central American migrants began traveling in large groups in recent years, seeking safety in numbers. Calls for a new caravan to leave on October 1 had circulated for weeks on social media.

The scene offered a picture reminiscent of a migrant caravan that formed two years ago, shortly before US midterm elections.

The topic became a major point of debate in the campaign, fueling anti-immigrant rhetoric and questions over migration policy in the US.

Mexican police have detained more than 300 Central American migrants in a caravan traveling towards the US border. Several thousand people are heading north to escape violence and poverty in their home countries.

President Donald Trump had threatened tariffs on all Mexican imports unless Mexico acted to slow illegal migration into the US. A new deal means it has avoided the threat, he announced.