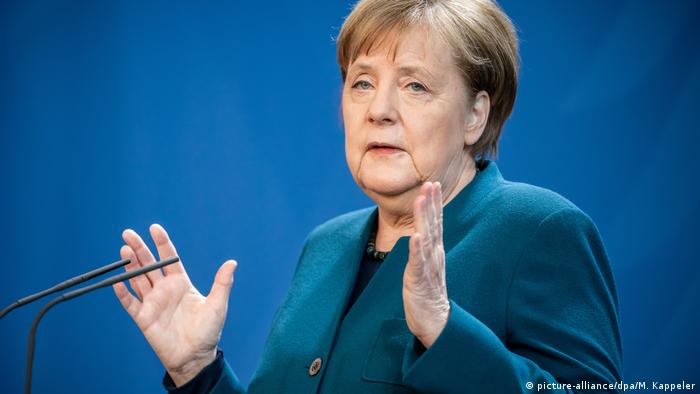 Chancellor Angela Merkel marked two decades since she was elected to lead Germany's Christian Democratic Union (CDU) on Friday, at a time when the country faces a pandemic that threatens to upend her legacy as chancellor.

Though she gave up command of the party in 2018, when Annegret Kramp Karrenbauer was voted in as the new CDU leader, her successor's short-lived tenure and resignation, coupled with a postponed party meeting to pick a new leader, means that Merkel is still — at least symbolically — at the helm of the conservative party.

Her last year as Chancellor comes as the country tackles the coronavirus health emergency that has triggered lockdowns across the globe, with serious ramifications for domestic and international economies, posing a major test for seasoned and new leaders alike.

Forging her own way

On April 10, 2000, some 897 out of 935 delegates at the CDU party conference in the western city of Essen voted in favor of Merkel's party leadership. It marked the moment that a woman became the leader of a major German political party for the first time.

She was from East Germany and had only been in politics for just ten years, but she benefited from the mentorship of Germany's long time powerful conservative chancellor Helmut Kohl.

Merkel forged her own path when Kohl was beset by a scandal over misappropriation of funds, the same scandal that tainted the other would-be successor, Wolfgang Schäuble. Her public disavowal of her former mentor, or what she has described as a signal to move forward after his tenure, was one of the critical steps she took to rise above.

Merkel became chancellor just five years later and after Kohl, is the longest-serving chancellor in the postwar era. Her tenure has been marked by both stability and economic prosperity.

But it was also shaped by various global and domestic crises over time, and Merkel managed to maintain her political footing after each one.

The 2008 global financial crisis and the subsequent euro debt crisis were major early challenges, but Merkel still managed to steer the CDU/CSU union to reelection in 2013, with the bloc nearly winning a historic outright majority.

Even after her controversial decision to let one million migrants into Germany, during the refugee crisis of 2015, Merkel still managed to get her party re-elected in 2017, despite a backlash that led to the rise of the far-right Alternative for Germany (AfD) party.

Over time, the party she has led for two decades has weakened electorally and Merkel's long tenure has overseen ever-increasing voter fragmentation, with non-traditional parties like the Greens rising and stalwarts like CDU and center-left SPD falling.

But Merkel herself has managed to stay afloat and ahead of the competition. Though wounded, she remains the most popular politician in the country to this day.

Merkel had pledged that her current chancellorship would be her last. Now, she faces the coronavirus pandemic, which she has referred to as the greatest challenge the country has faced since WWII.

As she crosses the 20-year mark, this could be her biggest test yet. But in this final and critical crisis, Germans are already giving her leadership a boost.  Some 80% of voters were pleased with Merkel's management of the COVID-19 crisis, according to a poll by broadcaster ZDF's Forschungsgruppe Wahlen.

Even her languishing Grand Coalition of CDU/CSU and SPD, which previously had a 28% approval rating, has risen to 37% in the polls.

Now more than ever, Germans seem to be looking to Merkel's longevity and experience handling crises.

After contact with a doctor infected with coronavirus in March, the German chancellor was forced into quarantine. Now she has left her Berlin home for the first time in almost two weeks. (03.04.2020)

The German chancellor urged understanding and solidarity one day after the government said up to 70% of people in the country could become infected with the coronavirus. Infections in Germany rose by 57 on Wednesday. (11.03.2020)