A year that would go down in history. 1968 stands for youth protests and the Vietnam War, hippies and free love. And for a question that young Germans were asking their parents: What did you do under Hitler? 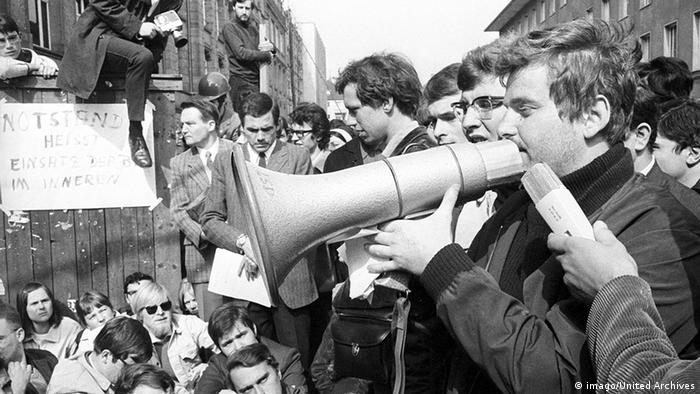 Worldwide demonstrations against the Vietnam War, the assassination of Martin Luther King, Jr., the bloody end of the Prague Spring, shots fired at German student leader Rudi Dutschke, the weeklong general strike in France - all that and more happened during the turbulent year of 1968. Young people, especially in the affluent West, were rebelling against the old structures, calling for representation and the opportunity to take part in society. They were looking for more from life than just wealth and consumption.

Life in West Germany was better than ever before, and the economy was booming. Unemployment was practically unheard of, and in order to meet the labor demand guest workers were recruited from the economically weak regions of Italy, Spain and Portugal, Yugoslavia and Turkey. These people would shape the face of German society for decades to come.

In Germany, the riots began a year earlier following the death of Benno Ohnesorg, a student shot by a police officer during a demonstration against the Iranian shah on June 2. The circumstances of his death remained unclear for some time, and led to demonstrations in which the police responded with severe force and the press - especially the newspapers of the Axel Springer media group - mainly, and falsely, portrayed the protesters as violent. 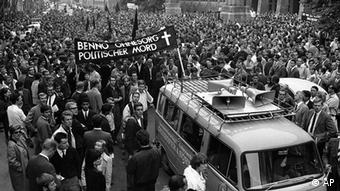 Three days after the death of Benno Ohnesorg, students were demonstrating in Munich

The high point was reached in April 1968, when student leader Rudi Dutschke was seriously wounded in an assassination attempt. In late May, the coalition government of the Christian Democrats/Christian Socialists (CDU/CSU) and Social Democrats (SPD) adopted emergency laws that gave the police even more power in the event of a crisis. Activists in the APO, the extra-parliamentary opposition to which Dutschke belonged, feared an authoritarian shift to the right.

For the East German regime, the protests had arrived at just the right time. Ohnesorg's death was turned into propaganda, proof of the "fascist nature" of the West. But even in East Germany, young people were cautiously pushing back against a state which was massively curtailing their liberty.

They wanted the freedom to choose: their occupation, their home, their friends, their music. And they wanted to choose their own leisure activities, free from the dictates of the socialist Free German Youth (FDJ), the official East German youth movement.

Many also didn't agree with how Russian tanks crushed the attempt to put a cosmopolitan "human face" on socialism in Czechoslovakia. Protests in East Germany, however, were more subtle, via allusions in song lyrics for example.

The youth protests of 1968 were a worldwide phenomenon, but in West Germany they had a special background. A year earlier, a book had been published that shook up society: "Die Unfähigkeit, zu trauern" ("The Inability to Mourn: Principles of Collective Behavior"), by psychoanalysts Margarete and Alexander Mitscherlich. In their work, they examined the fault of the individual when it comes to political crimes - National Socialism, in particular.

They attested that instead of sharing responsibility for Nazi crimes, Germans collectively lacked any sense of compassion and shame, and instead were laying the blame entirely on Hitler and his leadership. The book was a polemic, a public confrontation with National Socialism in Germany more than 20 years after its end. It inspired the youth of 1968 to ask their parents: What did you do during the war?

Unlike in East Germany, former Nazis were still sitting in positions of power in the West: in the administration, the police, the medical profession and the judiciary.

Even in the universities, where authoritarian structures had remained nearly unchanged. Professors and lecturers still met amongst themselves, and student participation was not part of the program. But that's exactly what they began to demand. The following rhyme became a kind of motto: 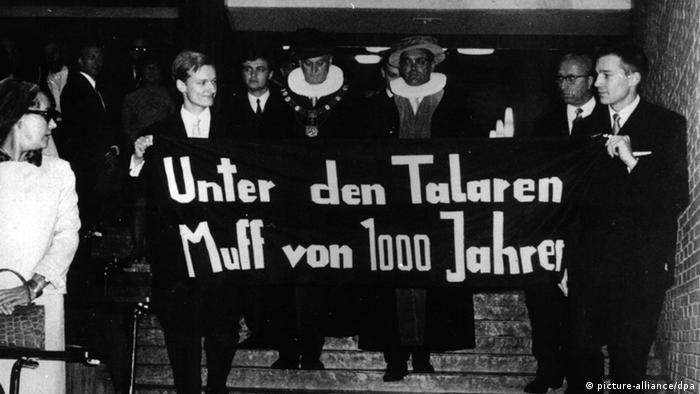 Under academic gowns / A musty smell of 1000 years abounds

The future in Technicolor

Only seven years lay between 1961 and 1968 - and yet they were eons apart. It was almost as if someone had flicked a switch - and suddenly everything was in Technicolor. Quite literally, in fact: a year earlier, on August 25, 1967, Vice Chancellor Willy Brandt pressed a button and launched color television in the West. In 1969, East Germany followed suit.

Old black-and-white images soon seemed as if they were from another century. Photos taken just four or five years earlier, which showed young men in suits standing next to girls in petticoats, contrasted sharply with the long-haired teenagers of 1968, sitting on threadbare sofas next to women in short skirts.

Record players were spinning the latest hits: "Massachusetts" by the Bee Gees, The Beatles ballad "Hey Jude" and "Jumpin' Jack Flash" by The Rolling Stones. More and more English songs were conquering the charts, but German music also remained popular: the top hit of the year was Heintje's "Mama." 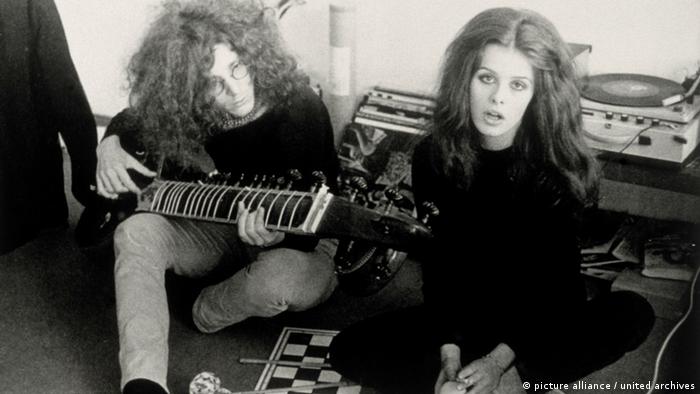 The alternative to sweet, little Heintje were the hippies, who deliberately distanced themselves from consumerism and the meritocracy. Their high point was the summer of 1969 at Woodstock, where they spent three days in the pouring rain surrounded by marijuana smoke and pop music, peacefully protesting against the Vietnam War and enjoying a sense of community. In 1970, Germany hosted its own version of the festival on the Baltic island of Fehmarn. Even Jimi Hendrix showed up, in his last major concert appearance.

It wasn't just at festivals where everyday life was undergoing a profound change. It was at the time that the first residential communities, known as communes, were created, with groups of like-minded people living together. These intentional communities were, naturally, criticized by their conservative neighbors.

The introduction of the birth control pill, which came on the market in Germany in 1961, made waves as the first reliable contraceptive. In 1968 the pill was everywhere and it contributed to the beginning of a sexual revolution that significantly changed the relationship between the sexes.

1968 - a banner year which concentrated the social and political awakening that would shape the future face of Germany. The year saw the environmental, peace and women's movements take root, but also the violence perpetrated by the German Red Army Faction terrorist group in the 1970s.

1989: Jeans and leather jackets for freedom and peace

2014: Reunified, online, and disillusioned: a generation seeks itself

The German singer-songwriter and famous former East German dissident Wolf Biermann turns 85 on November 15. A look back at his eventful life.